Did you play the old Succession Wars board game?  Or perhaps you want to pick up a copy of the board game but you are scared away by the price.  Maybe you’ve never played it at all and you want to give it a shot.  Whatever your reason, weblog ScrapYard Armory is currently hosting online games of The Succession Wars online. For the last year, ScrapYard Armory has been hosting a Beta version of the classic board game.  People grab a set at virtual tables and set up to play one of the five Successor States, and can play in eras such as 3025.  This online version of the game does have a few bugs, but new releases come out quite often to fix them.

The pace of the game is faster than a play by e-mail or forum.  People come by, log in and make their turns in the games they play, and then leave.  We found a few people wanting to play live on the weekend, so the game has that potential.  We started playing, but haven’t finished yet, a few days and turns later. 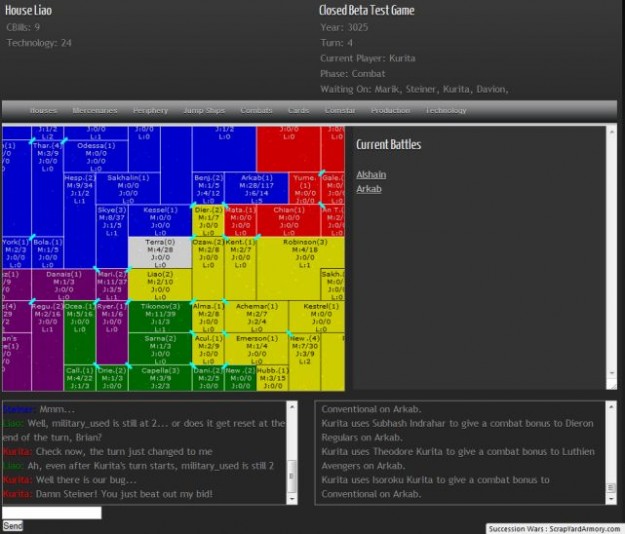 Our friends at ScrapYard Armory have admitted that they have made a few changes here and there to the online version of the game from the board game.  The game has been updated for online play in 2013.  Some phases are done for you, such as taxes and placement.   Others require you to move or place orders and then click done.

There are plenty of games that advertise themselves for newer players, so there is a great opportunity to learn how to play both the board game mechanics as well as its basic strategy there. Plus there are other eras to play as well, including the First Succession war and the Clan Invasion.

While the board game was great fun, it was sometimes hard to play because it really did need all five players in all of the houses to make things work.  Here you can guarantee that you have a full slot of players, which makes for a really fun game.

Do you think you have what it takes to dominate the Inner Sphere and reclaim your house’s rightful place as the one true power?  Check the game out today!

One thought on “The Succession Wars Lives!”