People who follow my articles have probably noticed that I like to spend time noticing “Little Guy” independent developers of not just table top games and miniatures, but videogames as well. The Trese brothers Cory and Andrew definitely fall into this category. And their passion for science fiction and fantasy shows if you look at their games featured on the Apple App Store and the Amazon and Google mobile markets. With tens of thousands of downloads each since 2010 and rating averages at 4.5 out of 5 and above, these indies are doing something right.

As of today Team Trese have four games released: Star Traders, Templar Assault, Cyber Knights, and Age of Pirates. A fifth game, a fantasy RPG called Heroes of Steel, is also in development. And activity on their forum strongly suggests other projects. I’ll be concentrating on the three sci-fi games.

First is the visual and gameplay styles shared by all the games so far. Being primarily for mobile consumption, Trese games are colorful and visually simple with limited sprite animation. To many, if not most In the younger generations, this will probably be seen as a negative given the genres. But for those with older phones or those old-school Commodore and Amiga users from my generation, the games might get you right in the nostalgia zone.

Be aware that although you can stop playing and save at any time, these aren’t really pick-up games, and you can forget what you were doing after a long hiatus if you saved in the middle of an important mission or job. Also of note is that despite their increasing catalog of games, Trese Bros regularly update their games. Not just to fix bugs, but to add and expand on new features and content. There are often monthly challenges announced on the forums that can be a source of fun and competition. Trese Bros. are also available on Facebook and Google Plus. 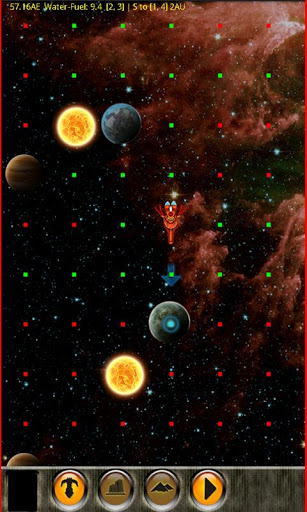 You are the Captain of a starship from a stellar nation, syndicate, or an independent contractor looking to make money for you and your crew. You can be part of a military, a pirate, smuggler, spy, bounty hunter, treasure hunter/prospector, or a simple merchant. Or any combination thereof. Politics is a major consideration as well, as is maintaining your crew and vessel. There are officers you can find and recruit to help.

There are literally dozens of ship classes you can buy or seize by force as well as over 250 separate worlds to explore. Customization of your ship to fit it to your style and career spec is also highly encouraged, as is the recruiting of officers that help you with specific goals. A ship’s mechanic, for example, reduces the need for and cost of post repairs. Trade commodities also have an effect on your ship. Luxury goods can help calm an unhappy crew, to name an example. It’s a hard game to put down. In fact if you don’t mind that the game is a ‘grinder’ (all Trese games are) I would say my main problem with the game is the lack of any real storyline. That probably will not be an issue in the sequel, as TB has been installing storied campaigns in their later games. 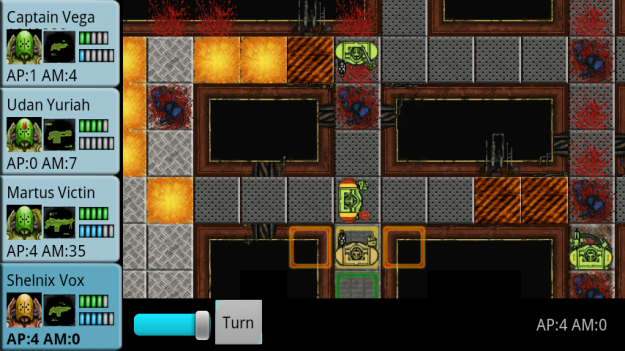 Leviathan Battle armor: When you absolutely positively HAVE to kill everyone in the room, accept no substitutes.

Templar Assault is a neat little top-down turn based tactical game that seems to have been inspired by Space Hulk, Aliens, and Warhammer 40K. A squad of four Templars wear different flavors of Leviathan Armor, hulking, assault battlearmor or landmate-sized affairs. The game superficially looks somewhat like MegaMek, though it is based on a grid movement plan and not hex-based. Most of the time your team is working in cramped ship and building corridors, so a grid plan works well. Despite this, Trese Bros. has made it so that you can have squad mates shoot past each other (probably by ducking or wall hugging) in cramped corridors. The point man can also ‘slice the pie’ by shooting around adjacent corners. M.O.U.T. (Military Operations on Urban Terrain) tactics come into play here, and you will learn to manage your team’s economy of speed, ammo, and their facing very quickly.

Bad guys come in the form of your garden variety swarming “Alien”-like Xeno, Enemy humans, and Narvidians’ beetle-like alien robots that don’t like you. The paid version has nearly sixty separate campaigns; ranging from clearing and salvaging derelict vessels, penetrating enemy hives, shutting down planet-side pirate operations, and a lot more than I’ve tried so far. You can choose scouts, chaplains, heavy machinegunners, flame thrower (my favorite) and melee specialists. 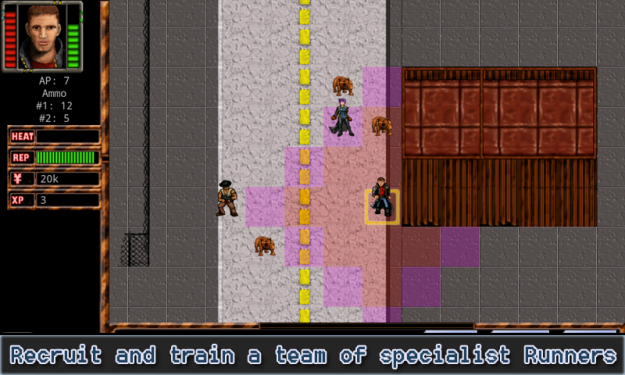 If you know or remember Cyberpunk-influenced games like Shadow Run and Gamma World, you’ll be right at home here. Cyber Knights places you as the leader of a team of  street-smart underworld professionals They are paid to do jobs on the down-low with no questions asked. From transporting encoded messages via implanted headware ala Johnny Mnemonic, delivering packages of contraband, sabotage, and wet-work; Cyber Knights has much in common with Star Traders in that you’re constantly on the move from job to job. There is a playable storyline tutorial that not only teaches how the game is played but gets you into the mood to play.

The fight mechanic has some similarities with Templar Assault in that weapon ranges and your characters’ placement directly dictate whether you can move, attack, evade, or escape. Cyber Knights also uses Action Points like Templar Assault. Weapons and equipment are standard modern to near-future fare; with a variety of light and heavy pistols, machine pistols, shotguns, carbines and melee weapons. I have to admit it’s a bit strange to go to an underworld weapons fence – I mean shop and see baseball bats with nails in them for sale.

Besides your normal hit points, you also have mental, or fatigue points that you must replenish with sleep or with an array of illicit drugs like stims. This is important; you won’t earn experience points if you’re exhausted.

Speaking of which, that’s about all for now. For now I’m off to go splat some Xenos.