Robots. Robots everywhere. In fact, according to Scott Hartley, co-founder of 5D Robotics and one of its senior research engineers, the US military could be outnumbered by them ten to one within ten years in an interview he recently gave to Computer World.

Whether there will be a significant number of ground combat robots like the MARS and TALON I think is probably more of a political debate than I’d want to dredge up in this venue, but suffice it to say that people are mighty unhappy with what’s going on in the UCAV arena. And so far, those are remote operated by datalink, not autonomously (most people tend not to know the difference). In fact, even the UN is thinking about banning combat robots according to this Forbes article dated 11/18. 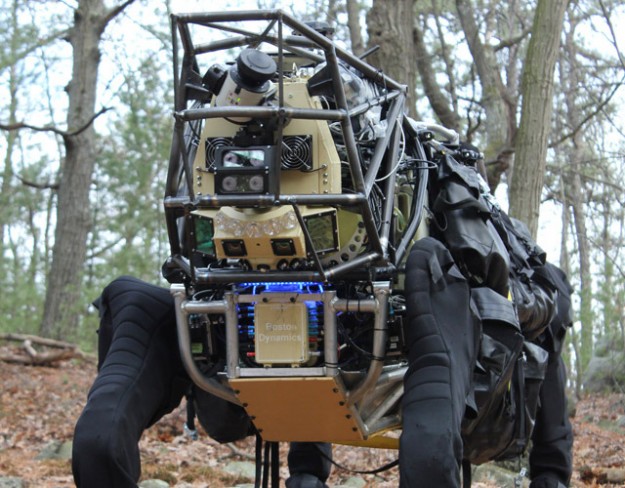 LS3: Re-inventing the mule: millions of dollars at a time.

The LS3 (Legged Squad Support System) is a headless, quad-legged ‘bot designed for the Marines of all branches. (Until recently, the Marines have almost always inherited the Army’s hand-me-down gear) While it appears to be a noisy, gas-driven target-of-opportunity, the Marines are looking to use it for exactly the same mission as the mule – Or the Willys Jeep for that matter: carrying supplies and casualties.

Brigadier General Kevin Killea sounded a bit less than enthusiastic about the program according to DefenseOne.

DARPA and the Marine Corps should be finishing up a two year shake-down of the LS3 program this summer. Testing has been taking place by introducing Marines from across the country to it and conducting patrols with them in a training environment. According to this Popular Mechanics article, the Marines would like to see a machine gun option. Unfortunately, the LS3 can only carry a third of its own weight- about 400lbs. An armed version would be giving up quite a bit of its load capacity for squad fire support, and would still require someone to control it.

Control is via a laptop sized device (probably a standard military toughbook); the operator can control directly, or set waypoints via voice command. The ‘bot drives itself via a bank of optical, IR, and LIDAR sensors, which the dual quad-core brains are sophisticated enough to tell the difference between tall grass and a brick wall.