f you are interested in a free program to design BattleMechs or vehicles, then you might want to try out Solaris Skunk Werks.  Although initially designed to use the then-new Total Warfare rules, it has been fleshed out over the years and can be used by anyone to design your favorite ‘Mech!

This tool is currently in development, and has been worked on for years.  The latest version was released this past June.  Solaris Skunk Werks (SSW) is designed to work with other games, such as MegaMek, so a unit saved here can be used elsewhere.  SSW supports rules based on the TechManual going forward, and not older books. 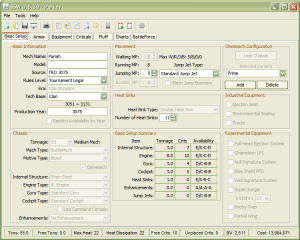 In order to run the ‘Mech Builder, just open the SSW jar file (you’ll need a Java Runtime installed).  The builder pops up.  For our trial run, we created a quick 70 ton Clan Invasion era ‘Mech with a variety of things to push them – ammo, jump jets, XL engine, and more. The UI is quite obvious, and there is even a place for you to add fluff descriptions of your units.

Other features of SSW include the ability to export to HTML and to print record sheets.

After a successful test with the Skunk Works, we moved to the Solaris Armor Works (SAW) program.  I built a 50 ton hover unit with max armor, In order to test things, I added an AC2, LRM5 and two medium lasers.  Everything worked quite nicely.

The interface has some important features.  For example, if I want to maximize my armor, there is a quick button on the armor tab to do that.  I can just click on something like Endo-Steel and auto to automatically allocate the critical space.  When I went to add my ammo in the hovertank, it filtered out all of the ammo for weapons I didn’t have, so I was only looking at AC2 and LRM5 ammo.  There are a lot of these small little steps that the program has to keep things easy. 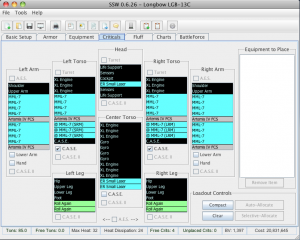 Obviously, having the capability to build different unit types would be really nice.  There are multiple build programs out there that can do precisely that.  Still, this resource works really well at building ‘Mechs and Vees.

In fact, I created three ‘Mechs in five minutes, including adding names and fluff.  So if you are interested in trying out a new program to build your units, check it out.