Wow, April has been a drag, right? With most of the world still locked down due to the coronavirus, most of us have been given a bunch of free time to play our favorite BattleTech products. Unfortunately, only the virtual kinds can be played with people who don’t already live with you. You’d think that would leave you with just video games like MechWarrior 5 or BATTLETECH, but don’t forget about the BattleTech Tabletop Simulator if you’ve got a VR headset! It’s always safe to play with big stompy robots in digital space.

And just because there’s a pandemic doesn’t mean the BattleTech news stops. Strap yourselves in for the April news roundup!

DiscreetProteus Has Been Posting Original BattleMech Sketches On Reddit

So this is a little wild. Reddit user u/DiscreetProteus has been posting original ‘Mech sketches on the BattleTech subreddit, and there are a lot of them. Designs that were originally penned by Ral Partha and Victor Musical Industries are represented here, including the Goshawk/Vapor Eagle, Stone Rhino/Behemoth, and the Wraith. There’s way more, and you should totally just click the username to go through them all.

The original drawing and design of the "Cerebus"/Cerberus from battletech

Take the Cerberus sketch here. It was originally going to be called the “Cerebus,” which as far as I can tell is either a reference to a Canadian cartoon aardvark or an unfortunate typo. It was also 10 tons lighter, had ER Large Lasers instead of Gauss Rifles in the arms, and a torso-mounted missile system.

They also all have a very distinct feel to them–especially the Victor Music Industries ‘Mechs which all seem to be heavily inspired by anime. That’s apparently due to VMI being based in Japan and being staffed by veteran designers that worked in the animation industry. I mean, the Incubus/Vixen looks basically the same as a Gundam, and it wouldn’t be the first time that FASA and a Japanese animation studio created some accidental crossover work.

According to u/DiscreetProteus, these old drawings just came up during a bit of spring cleaning and they were kind enough to post them on social media for us nerds to gawk at. Hopefully, a few of these get archived for safe-keeping.

Some of us are taking the COVID-19 lockdown better than others. Reddit user u/juodasvarnas has decided to use his downtime to take up 3D-modeling and recreated some of BattleTech‘s more obscure designs. I mean, who’s ever seen fan art of a Thorn? Or a Brigand? I love it.

I was able to get in touch with juodasvarnas to get the lowdown. “It’s just something i’ve always wanted to try, as I don’t really have much experience in modeling,” he told me in an email interview, “but you won’t ever get any experience if you never try!”

For modeling, he uses SketchUp, a relatively easy program to get into that’s good for clean, straight lines. SketchUp was originally intended for architecture, according to juodasvarnas, but it seems to do a fine job at making giant robots.

So why these obscure designs? “Bit of a spur of a moment kind of thing, whatever pops into my mind,” explains juodasvarnas. “Sometimes it’s a ‘Mech which I really like how they look, like the previously mentioned Brigand, or the Heliopolis and Goliath. Other times, it’s a ‘Mech I like conceptually, but find the art for it to be… Awkward to put it lightly?”

The Yeoman stays fairly true to the original, but the Thorn and Brigand are almost total redesigns worthy of MechWarrior 5. U/juodasvarnas doesn’t know what ‘Mech they’ll do next (although he’s leaning towards the Argus), but if you want to use the models for personal use, you can find them on the Battletech Art Society Discord Channel.

Did You Know That There’s A Community-Run Game Of BATTLETECH On Twitch? 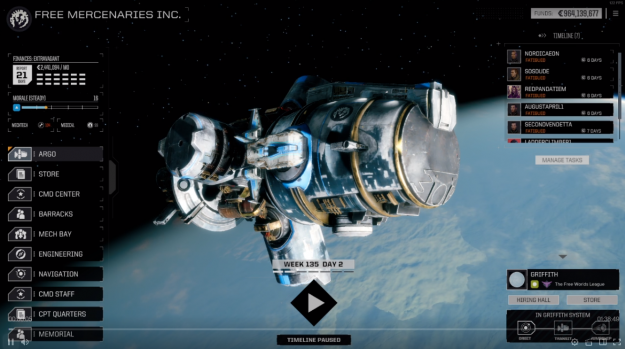 This just recently grabbed my attention over on Twitch and I thought it was a pretty neat idea. Someone is playing a campaign in Hairbrained’s BATTLETECH where the company is being played co-op style. Viewers build and manage their own ‘Mechs in a persistent world while roleplaying in the chat.

The campaign is using Roguetech, the wildly popular mod for BATTLETECH that adds roguelike elements, and is a bit of a work in progress. It’s not quite as chaotic as Twitch Plays; there are a few basic commands that anyone can type in the chat (such as joining the game with !join), but each turn of combat is played by handing over the mouse controls to their respective player.

After typing !join in the chat, you’ll be given a  random starter ‘Mech and the game master will create the pilot (which you can request to look like whatever you want). You then get into your first contract but be patient since the more players there are, the longer it will take for your character to go on a mission.

It’s super neat and a great way to spend some time with other BattleTech fans. You can check it out here. 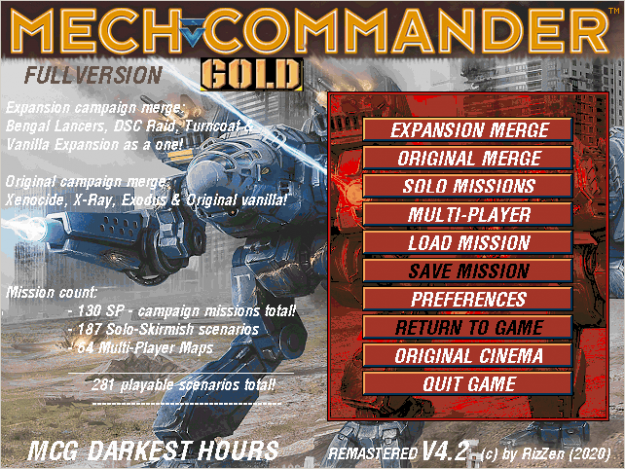 MechCommander originally came out in 1998 as the first real-time strategy game set in the BattleTech universe. Although it took some liberties with the BattleTech canon (why the hell was the JagerMech suddenly 70 tons?) it was still a great game that took the franchise in a fresh and new direction.

It’s also been a genre that BattleTech has never returned to. BATTLETECH brings the series to its turn-based roots, but real-time strategy enthusiasts are out of luck.

But not anymore. RizZen has updated MechCommander Gold: Darkest Hours for modern hardware in version 4.2. Now, anyone can relive the glory days of MechCommander thanks to a completely free download.

Oh right, I forgot to mention: the whole game is free. It’s been freeware since 2006. And since the game is a bajillion years old, it’ll basically run on a potato. Just mount the .ISO file and click on the resolution version of the game you want to install. That’s it.

Not only does this version contain both the original and Desperate Measures expansion campaign, but it also includes an enormous collection of fan-made custom levels and campaigns.

According to RizZen, this is the most bug-free and complete edition of MechCommander ever made, so you might as well download it to save for a rainy day. Lord knows we got a lot of those lately.

Want To Make A Lego Uziel? This Guy Made Instructions 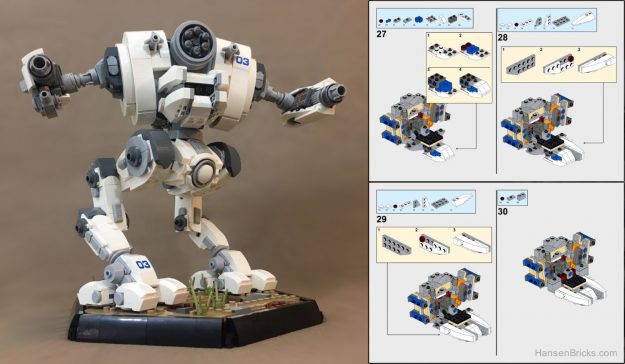 Credits to Kevin Hansen for not only making this incredible Lego Uziel, but also posting the instructions so that anyone can buy the parts and make it at home. Now, you too can make your own Lego ‘Mech because we finally have some step-by-step instructions to guide us!

Kevin’s also got a Lego Ryoken/Storm Crow on his personal page with similar instructions and a component list. If you don’t have the parts, order them directly from Lego here.

You’ve probably played through BATTLETECH a few times by now and are looking for something new. You could try RogueTech, but if you hate roguelikes like me, then maybe give BATTLETECH Advanced 3062 a try.

BATTLETECH Advanced 3062 is a full overhaul of BATTLETECH that brings the technological level of the Inner Sphere to just before the FedCom Civil War. It adds more than 500 new ‘Mechs, dozens of weapons, and changes many of the game’s core mechanics like the turn-based combat and ‘Mechbay customization.

And now you can use Clan tech thanks to the Clan Invasion. Sweet, right? Head on over to Nexus Mods to download this mod and start your thirteenth playthrough right now. 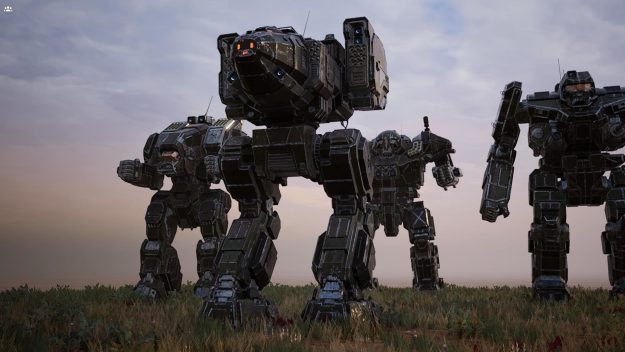 Although originally targeting April to release MechWarrior 5: Mercenaries‘ first DLC, that all got up-ended thanks to COVID-19. But we do have some new details on what to expect for the first DLC pack thanks to a recent update from PGI.

Called Heroes of the Inner Sphere, the DLC will add a new career mode that will have you start from scratch with any of the Great Houses or you can import your progress from the original campaign. The DLC will also add a new quirking system that MechWarrior Online fans will be familiar with, as well as blueprints to get those quirks installed.

There will be seven new ‘Mechs, including the Corsair, Vulcan, Charger, Hatamoto-Chi, Dervish, Champion, and Marauder II. Expect 50 new variants for existing ‘Mechs as well as a bunch of new equipment and weapons (such as ECM and Chem Lasers).

We still don’t have a precise release date, but that should be coming as we approach summer.

6 thoughts on “Your BattleTech News Roundup For April 2020”