Hah! Just when you thought that Sarna’s monthly news reports were going to start off a little more cheerily with the waning pandemic, HERE COMES RUSSIA WITH A STEEL CHAIR!

But seriously, this whole Russian invasion of Ukraine is terrifying and I find little (read, no) humor in it. To everyone suffering in Ukraine, I hope this all ends soon with a minimum loss of life. To everyone outside of Ukraine, here’s how you can help.

And now, onto the news.

Can I Interest You In Life Insurance With Kerensky Mutual?

We begin with something that just missed the cutoff for the January news blast. I’m all about the BattleTech memes, and this one from Agressive_Loafing is premium dank meme material. All they had to do was add a top hat and a briefcase and suddenly this Elemental is far less of a threat to this Zeus. Although, depending on the deductible, still a potential threat. 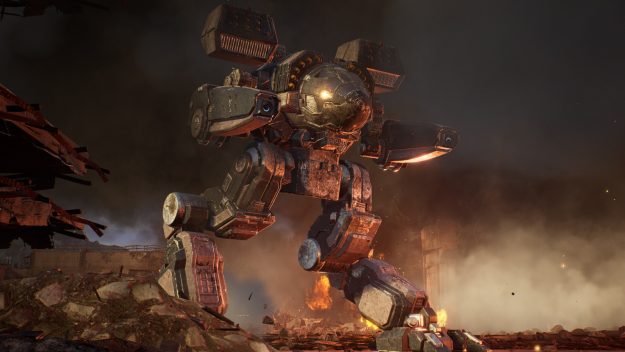 So, remember that time a modder added the Timber Wolf to MechWarrior 5? Well, now we’ve got the Mad Cat Mk IV, better known as the Savage Wolf.

Normally, this ‘Mech doesn’t show up in the Inner Sphere until the year 3136, but in this MechWarrior 5 mod, it’ll start appearing in 3058, albeit extremely rarely. Instructions on how to use a save editor to acquire the Savage Wolf immediately are listed at the bottom of the mod page.

According to the mod description by gomgom50, the Savage Wolf requires at least the Heroes of the Inner Sphere expansion and maybe the Legendo of the Kestrel Lancers, too. There’s also a version of the mod that works in conjunction with the YAML Mechlab and YAMC Clan Weapon mods.

You might note there is a slight difference between the canon Savage Wolf and the version displayed in the mod, specifically where it comes to the placement of the Streak SRM-6s. The rear-facing launchers have been swapped to the front, making this basically the same as the Timber Wolf Alt. Config D. I think gomgom50 has done a decent job of retaining the Savage Wolf’s distinctive looks while modifying the weapons to work in MW5.

This may be the first and only time we see a Republic-era ‘Mech in MechWarrior, so be sure to give this one a try.

Renegade HPG has once again proven in a fantastic resource for anyone looking to learn more about BattleTech’s past. This time, Travis has snagged Sam Lewis, BattleTech line developer and later FASA president between the years of 1987 to 1995. Travis went through Sam’s entire career with FASA and especially the formative years of BattleTech’s lore where Sam worked with the authors like Michael Stackpole and Anthony Pryor. He also had a hand in creating the BattleTech Animated Series, which given how much digging Renegade HPG has done on that topic, explains how Sam Lewis came to be on the opposite end of a Zoom call.

It’s a long interview that spans many topics, so be sure to set aside some time. But if you kinda already know Sam’s history and just want a bit of fun, Renegade HPG did a follow-up interview with Sam and DC Bruins where the three of them watched some recent BattleTech fan films. Sam’s delight is infectious and a real treat. Give ‘em both a watch.

Wait A Minute, It’s Not Halloween Yet!

The Black Marauder from OutreachHPG

Tychorion is an artist you should be following on Twitter. A true BattleTech fan, Tychorion shares a lot of great ‘Mech art, and I wanted to showcase one piece that recently popped up on Reddit that made me once again dive into Sarna’s vast data repository.

This is the Black Marauder, a ‘Mech that really oughtta be shared closer to Halloween. As noted in Sarna’s entry, “In some instances the ‘Mech was—always inconclusively—described to move in ways that are impossible for a Marauder (or any ‘Mech), including one tale where it was said to have turned its ‘head’ by bending its long snout just forward of the arm joints and revealed a maw with rows of serrated teeth.”

What’s even spookier is that the ‘Mech seems to grow stronger when you line its armor with carcasses or how it turns its pilots into bloodthirsty demons. Tales of the Black Marauder started during the Fourth Succession War and extended all the way to the early Republic era. Either way, if you see a grinning Marauder turn without torso twisting, it’s time to run.

Forgotten Weapons, a YouTuber who specializes in reviewing and dissecting firearms from throughout history both modern and ancient, recently decided to showcase something that’s on the bleeding edge of gun science. I present to you, the Arcflash Labs GR-1 Anvil; the world’s first commercially available Gauss Rifle.

Just like in BattleTech, the GR-1 uses a battery to charge a bank of capacitors that power a string of coils that magnetically accelerate a metal slug down and out the barrel. As Forgotten Weapons notes, the GR-1 is wildly impractical, not the least of which because it weighs over 20 pounds, will fry your cell phone if it’s still in your pocket when you pull the trigger and fires a small metal slug at roughly 230 feet per second. To put that into perspective, that’s basically a gun that weighs as much as two bowling balls firing a little metal pellet at about the same speed as a paintball gun. It’s enough to leave a pretty nasty bruise, but it’s not likely to penetrate the skin unless it’s fired at extremely close range. You can actually see the metal slugs drop significantly soon after leaving the barrel during the firing tests.

Forgotten Weapons notes that the GR-1 is still in a technical alpha stage and isn’t being mass produced just yet, so we can forgive its lackluster performance. Getting one involves printing the parts via a 3D printer and then sourcing all the electrical bits yourself. And also machining the barrel and however many metal slugs you want.

The GR-1 Anvil is a far cry from the Gauss Rifles of BattleTech which fires nickel-ferrous slugs at hypersonic speeds, but who cares? The technology is here, so you can check off Gauss Rifles from your BattleTech future bingo card. 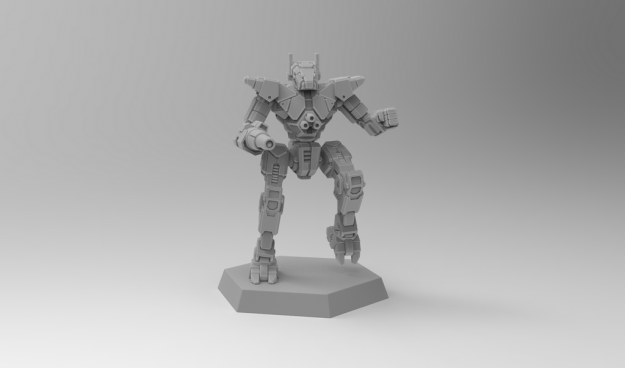 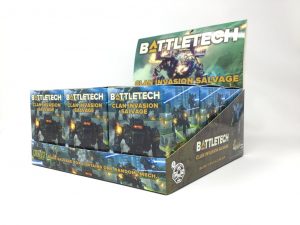 The Wolfhound IIC is now available on Catalyst’s website for $14.99. Yes, that’s more than you’d typically pay per mini in other boxes, but you do get some extra goodies with the Grinner, including three different pairs of legs and four different arms to let you pose Grinner however you’d like.

Catalyst expects the Wolfhound IIC to be a popular item, so sales are limited to two per person for the first week. They also promise that the Wolfhound IIC will be reprinted so even if they run out they’ll get more stock in future print runs.

On top of that, Catalyst is also making more Salvage Boxes available, but this time containing all 93 designs seen in the Clan Invasion Kickstarter campaign. These Salvage Boxes are fun little ways to augment your arsenal since you never know what you’re going to get. The new Salvage Boxes are available now at Barnes and Noble and Catalyst’s online storefront and will be available soon at your local game shop.

The urbanmech is lonely no longer . . . New plushies leaked from battletech

First we got the UrbanMech, a choice that I will hardly fault Catalyst for because if any of BattleTech‘s many ‘Mechs should be turned into a plushie, it’s the Urbie. But it’s not my favorite ‘Mech by a wide margin, and I’d very much prefer something else instead. Thankfully, I might soon be able to purchase a replacement.

This photo got shared on the BattleTech subreddit. I don’t know where it originally came from (some are saying it was posted on Loren Coleman’s Facebook, but the post is gone now) and I don’t know what context this photo was taken under, but I find it difficult to believe someone would go to the trouble of photoshopping a bunch of fake ‘Mech plushies underneath the one real plushie we know about.

From what I can see, there’s a Phoenix Hawk at the bottom, an Archer on the right, an Atlas on the left beside the Urbie‘s left foot, and some strange blue ‘Mech just behind it that I absolutely cannot identify. It sort of looks like a Hatchetman, but without the right-arm hatchet. I’m sure someone will correct me, as I am also sure someone will alert me when these new ‘Mech plushies are officially announced.

Eldonious Rex, the superb artist who does the art for Sarna’s Bad ‘Mechs series, recently shared a poster done for the folks making Hired Steel, the equally superb fan-made MechWarrior video series. Hired Steel is probably the highest-quality and most intricate animation I’ve ever seen outside of a video game, so I highly encourage you to watch the latest episode which is now available on YouTube.

So. We need to talk about Canopian Catgirls because I hear them mentioned quite a bit, and I don’t get it. I know that the Magistracy of Canopus has an exceptionally liberal and even wildly hedonistic society, which I can definitely get behind. The Magistracy even has a well-regulated sex industry where everyone is protected so long as there’s consent. Honestly, sounds like a great place compared to the rest of the Inner Sphere.

But Sarna doesn’t have an entry on Canopian Catgirls, and I can’t find anything that even mentions the possibility of ladies of the night with cat ears. My understanding here is that some of the Japanese origins of BattleTech got caught up in certain anime tropes which is how catgirls managed to make their way into the established canon. If anyone can help me sleuth this catgirl stuff out, that’d be swell.

Something Big Is Coming From The Writer Of Star Wars: Rogue One

First teaser image for my next thing. Been working on this since 2018. It's… big. Coming later this spring. Can't wait to show you more. Soon. #StandUpAndFight #WreckTheMek pic.twitter.com/4q5kHWfhT3

You might remember Gary Whitta as the screenwriter who wrote Rogue One, The Book of Eli, The Walking Dead, Star Wars Rebels, and a whole bunch of other stuff. He also hosted Animal Talking when that was a thing, and also created the pervy Wordle spinoff, Lewdle.

The point is, the guy is connected in Hollywood, and now he’s teasing something big. Something with mechs.

We should note that the word “‘Mech” wasn’t used anywhere, so it seems whatever giant robot action flick Whitta is teasing won’t be a Hollywood adaptation of our beloved BattleTech. But I’m a fan of giant robots of all sorts and stripes, and I know a lot of you folks are too. I’ll stay tuned to this developing story.

15 thoughts on “Your BattleTech News Roundup For February, 2022”