Welcome to your BattleTech News Roundup for the month of June, 2020. Now we’ve got protests against police brutality and massive civil unrest to go along with the global pandemic, so that’s cool. Who had race riots on their Apocalypse: 2020 Bingo card? Someone’s gotta be close to winning by this point. I’m still waiting on “volcanic eruption” and “meteorite impact” to complete my set, although I’m eyeing “alien invasion” with more and more suspicion.

Anyway, we’re not going to get too political around these parts. BattleTech had a busy month in June, so we’ve got plenty of much more fun stuff to talk about. Let’s get this party started. 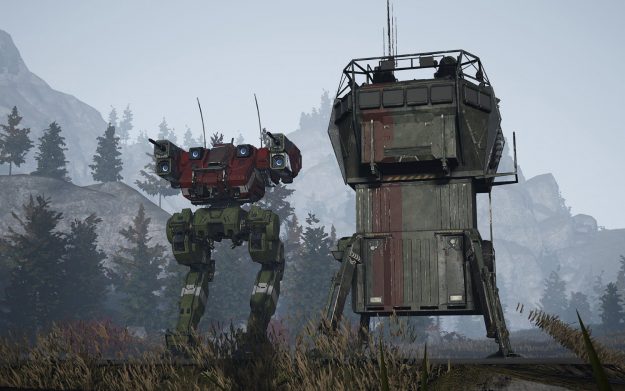 While MechWarrior 5: Mercenaries has remained an Epic exclusive, it’s not 100% exclusive to Epic. If you’re really against Epic, you could always buy the game on the Microsoft Store for the same price.

There was a bit of a hiccup as PGI also changed the save data location to make things a little more accessible, but this caused players to lose their save files and campaign progression if they had the game installed anywhere other than their C drives. Players had to go digging around for their save files to put them in the new location in order to get their campaign back. 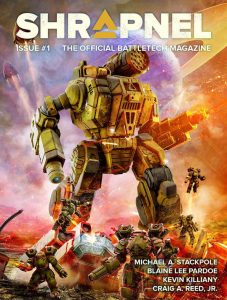 Kickstarter backers got their inaugural issue of Shrapnel a few weeks ago, but now The Official BattleTech Magazine is available for everyone via Amazon.

Shrapnel represents a return to more serialized BattleTech fiction, filling the void left by BattleCorps when it shut down in 2017. It’s definitely a tome, clocking in at 172 digital pages when you include the index (the magazine portion itself is more like 150 pages). Within this digital magazine, you’ll find short stories from recognizable authors like Blaine Lee Pardoe and Kevin Killany, a forward from editor Philip A. Lee, and some more technical pieces about sniper rifles and the Eridani Light Horse.

They’re also publishing Michael A. Stackpole’s recent Kell Hounds novella If Auld Acquaintances Be Forgot. Which sort of explains why this thing is about the size of a small novel, and why it’s being priced at $5.95 on Amazon. That’s good value, considering the amount of text you’re getting.

As Blaine points out, the first issue of Shrapnel is very wordy without a lot of visual aids. Shrapnel is taking submissions for future issues, but so far the submission guidelines are all about word limits and preferred subject material (which is to say character-focused BattleTech stories). There’s nothing about fanart submissions, but reach out anyway. I’m sure Catalyst would love to spruce things up with a bit of fanart.

Now, I know what you’re thinking: “Sean, you’re a writer, why don’t you submit something to Shrapnel?” Well, I did have this idea about a gay romance between star-crossed Elementals from different Clans, but I don’t think anyone wants to read that. Plus I’d have to edit out the sex scenes to meet the PG-13 requirement and trust me, that’d be A LOT of work.

But if anyone at Catalyst thinks goofy articles about AC/20 ammo being made of pancakes is worth reading, gimme a shout. 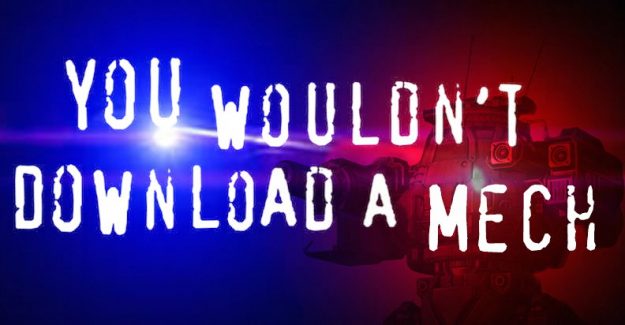 courtesy of Fried Eggs on Discord

Well, this was a long time coming. Catalyst has finally taken action against the burgeoning 3D printing community to remove all copyrighted materials from Thingiverse, perhaps the largest 3D printing design site on the internet. This has resulted in many ‘Mech designs being removed at their request.

Takedown requests started getting sent out at the beginning of June, and according to a copy of the request posted by Reddit user AceTimberwolf, those requests are coming directly from BattleTech line developer Ray Arrastia.

You can’t blame Catalyst for protecting their copyrighted ‘Mechs, but it looks like this was a takedown of anything that was tagged “BattleTech” on Thingiverse. This meant things that aren’t technically copyrighted also got taken down, including stuff like buildings, trees, and other hex-based terrains. Custom designs that were based on copyrighted ‘Mechs also got the ax. 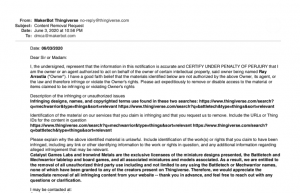 It was all a little heavy-handed, and it has left a bad taste in the mouths of the 3D-printing community. The BattleTech International 3D Printing Facebook group has taken to tagging their designs “America Mecha Game” to both protest the mass removal and also avoid future takedown notices, with various pirate memes dominating the recent postings (kudos to Fried Eggs on the Everything BattleTech Discord server for coming up with this delightful UrbieCop meme).

My take? Catalyst is staring down an existential threat. Printing minis at home means they lose their market, which means they lose some pretty essential revenue. They’d rather BattleTech fans buy minis they make instead. That’s how their business works, how it’s always worked.

But there’s really no putting this genie back in the bottle. Just as how music had to transform decades ago thanks to the advent of MP3s, so too will gaming miniature providers have to change how they do things thanks to 3D printers. C&D’s and takedown requests might slow things down for now, but they won’t stop it. The technology is out there, and it’ll only get harder and harder to police as 3D printers get cheaper and 3D designs get easier to make.

I won’t link them here, but I can tell you that certain Facebook groups are already throwing Dropbox links around with all those removed Thinigverse designs inside them. This fight is only going to get spicier in the coming months as the Clan Invasion Kickstarter shipments start later this year.

Halfway Through, So Here’s A Pixel Art Javelin

Reddit user Maaxxim posted this one and I really like it. Javelins don’t get enough love (even though you’re basically given one for free in MechWarrior 5), so I’m glad to see someone else is giving the Javelin some long-overdue attention. 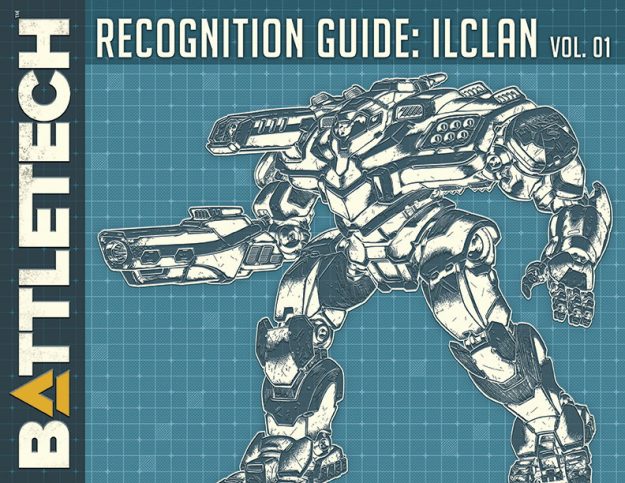 People have been wondering when we’ll see IlClan. Well, here’s our first good taste. The IlClan TRO is being handed out piece by piece as it’s being created in the form of the BattleTech Recognition Guide: IlClan.

What will eventually span 22 PDF files, these Recognition Guides will include at least one all-new ‘Mech per volume and also redesigns on classic ‘Mechs rebuilt using Dark Age tech. They’ll also include “in-universe development notes, battle histories, notable pilots, and record sheets for each ‘Mech.” 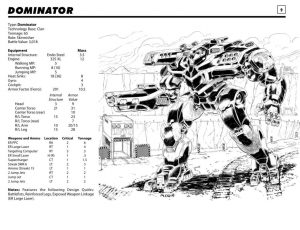 After all 22 PDFs are published, they’ll be combined into a single print volume. If this doesn’t eventually become the IlClan TRO, I don’t know what will.

In a preview posted on Twitter, Catalyst also treated us to that new ‘Mech that was on the cover of Pardoe’s latest book, Divided We Fall. The Dominator is a 65-ton Clan BattleMech with decent speed, armor, and jump jets. And I was mostly right about the armament too with the real design sporting an ER PPC, ER Large Laser, ER Small Laser, and a Streak SRM-6. A Targeting Computer makes those long-range energy weapons hit consistently, and I’m all about consistency. 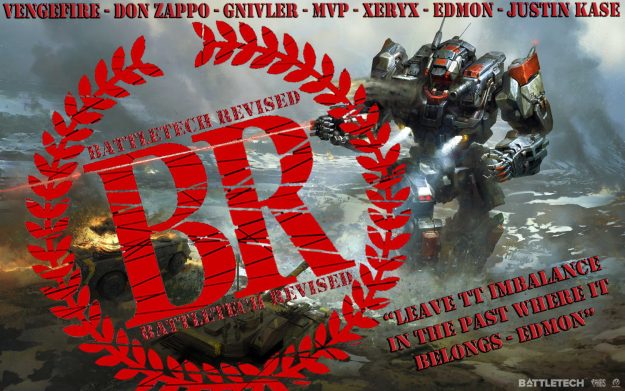 Back in March, we heard about a “crack commando team” that was looking to rebalance everything in BATTLETECH, from ‘Mech hardpoints to weapon stats. We were promised an update later, and it seems that time has come.

BATTLETECH Revised is now available on Nexus Mods and it brings with it a totally new BATTLETECH experience. ‘Mechs now have quirks based on their lore that gives them… well, quirks. Strong ‘Mechs were given debuff quirks, while weaker designs got helpful quirks.

[Ed. It has been brought to my attention that the prototype and early model Commandos were actually snipers armed with large lasers and AC/2, notably the COM-1A, COM-1B, and COM1-C. So this is more in keeping with BattleTech than previously indicated. My bad!]

On the plus side, weapons have been rebalanced so that some of the more maligned weapon systems such as the AC/2 are now much more of a threat. On top of that, there are big changes to the game’s economy, story, and pilot abilities, with pilots now receiving special bonuses if they’re sent into combat in their personal rides.

It sounds like a much-expanded experience, even if the designers aren’t quite aware of the full BattleTech lore, so if you’re looking to change up your game, try BATTLETECH Revised.

June is a big month for Catalyst! They’ve already taken up most of this recap, but we still have a few more newsworthy updates to make with new BattleTech products. 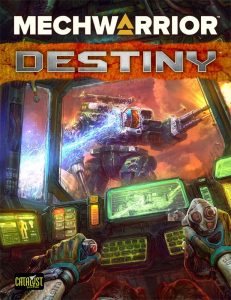 Starting with MechWarrior: Destiny, the new RPG based on the Cue system. I have not played anything using the Cue system, but it certainly sounds interesting. Rather than having a GM, the Cue system gives each player a turn at being the Lead Narrator using “cues” on their character sheet to move each scene forward. It’s designed to be easy to learn, so it shouldn’t add too much of a complicating layer to regular BattleTech tabletop gameplay.

Turning Points: Tyrfing is also available now in PDF form, telling the story of how the planet Tyrfing became the scene for a five-way war for Lostech during the First Succession War. There’s also a bunch of dice sets available using the logos for famous mercenary groups, including Gray Death Legion, McCarron’s Armored Cavalry, the 21st Centauri Lancers, the Eridani Light Horse, and the Northwind Highlanders. 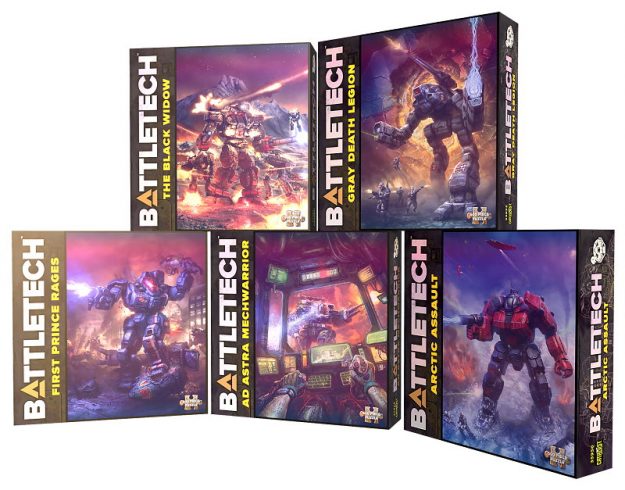 And finally, we got some brand new jigsaw puzzles. Each puzzle is 500 pieces, 18×24-inches, and features box and cover art from some of the most iconic BattleTech products out today. Only 1,000 puzzles of each design will be made, and they’ll be foil-printed too. Combine this with the coloring books from last month and you got yourself the perfect way to keep the kids entertained during social distancing.

Have A Hornet To Brighten Your Day

Reddit user u/juodasvarnas is back with another 3D design, this time the Hornet. It looks sort of like half an UrbanMech with jet engines strapped to the back, which I’m sure is perfectly safe. We need more Hornets out there hopping along and shooting their LRM-5s at nothing in particular–much like how a yellow jacket is inclined to sting for no particular reason.

4 thoughts on “Your BattleTech News Roundup For June 2020”