June is the best month. The start of summer brings the heat, while the month of Pride brings back the festival atmosphere that has been missing from Toronto for the past two years. Not that I’m willing to bake myself in the sun for hours just to watch a bunch of scantily-clad dudes walk down Yonge Street, but it’s still a nice return to normalcy.

Speaking of normalcy, it’s the end of the month, and that means it’s time for your regularly schedule BattleTech update! Let’s get started!

We’ll start off with something that you likely already know from our previous reporting, but MechWarrior 5‘s third (and possibly last) DLC is available now. Building on the melee combat added in Legend of the Kestrel Lancers, Call to Arms adds a whole armory’s worth of melee weapons to MechWarrior 5: Mercenaries. Quickdraws are a lot scarier when they’re comin’ at you with a giant sword instead of an LRM-10.

In addition, Call to Arms adds several new biomes, 23 new “weapon-focused” ‘Mech variants, five new weapon-focused Hero ‘Mechs, and a small quest to retrieve the Hatchetman on behalf of some Lyran rebels. Contract tonnage is also a lot more flexible, and dying will just mean swapping to another MechWarrior in your lance.

As for what’s coming next, I have no idea and everything is pure speculation at this point. But if this is truly the last MechWarrior 5 expansion, the modders are finally free to go buckwild with this game, and that’s pretty exciting on its own.

Someone Is Making A BattleTech Player-Finder App 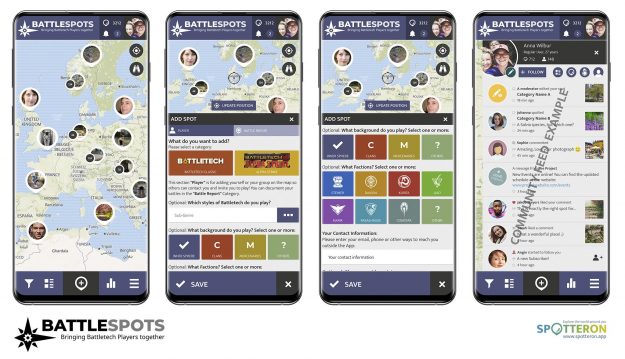 As we emerge from the COVID pandemic, people are naturally looking to be more social. And what better way to be more social than to find a bunch of like-minded BattleTech fans to play the hit tabletop game? I’ve been seeing a lot of folks posting pictures of all those fancy new minis and complaining about not having anyone to play with, but a new app might soon eliminate that problem.

Reddit user vonseiten posted to the BattleTech subreddit their idea for a BattleTech Player-Finder and Battlereport app. Called “BattleSpots,” the app seems to be powered by another app called Spotteron, which basically just lets you geolocate other people using the app under certain categories. There’s a Discord up for those lookin’ to sign up, provide feedback, or to answer any questions you have with how the whole thing works.

BattleSpots is available now on Google and iOS. The official site will link you to the Google Play and App Store pages. 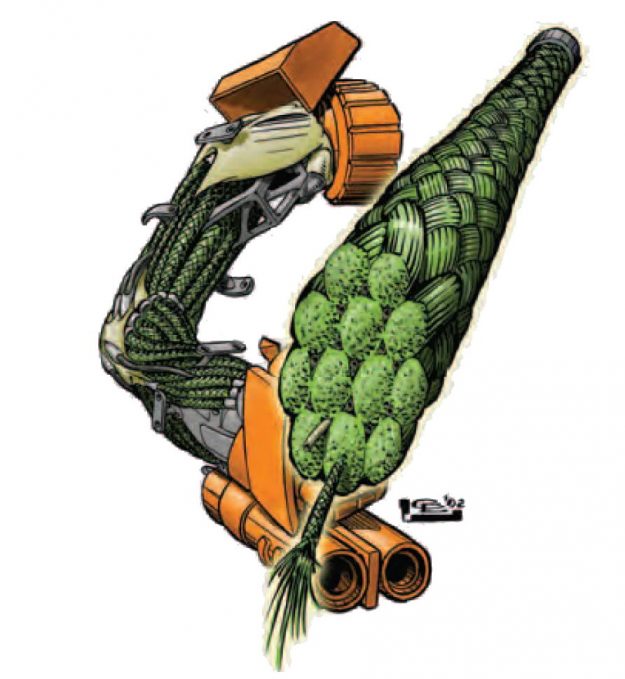 We’ve seen a few stories about technological breakthroughs in material science that made Myomer Muscle-like fibers, but this most recent paper published in Nature Nano seems the closest yet to commercial applications.

Researchers at Texas U. at Austin and Penn State University have created a block copolymer (fiber material) that assembles itself in water, making it easier to create than previous fibers. These fibers are also 75% more efficient than current electrical actuators, and up to 900% tougher too. Best of all, the fibers are recyclable, meaning it’s easy to reverse their water-born assembly to be used in other applications. Apparently, the researchers were initially looking for a new material to make water filtration membranes, but instead they discovered a material that could have massive applications in both robotics and medicine.

As usual, this is all still in the research stages and hasn’t actually seen any real-world applications. But I’m hopeful for some cool bionics by the time I need my hip replaced. You can read more about these fibers over at the University of Texas’s website. 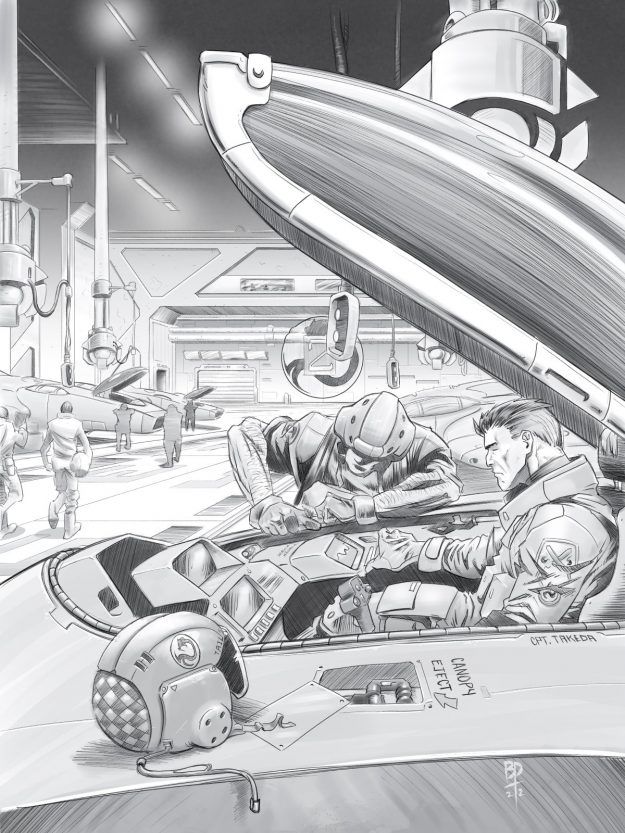 We’ve got two pieces from Gallery 3025 to share this month, and both of them are by artist Bruce Patnaude. The first, shown above, depicts a busy hangar bay full of Aerospace pilots undergoing preflight checks. These fighters appear to be Sholagars, but my knowledge of Drac spacers is not particularly extensive. Correct me on this one if I’m wrong.

If you want to see more, be sure to visit the Gallery 3025 Patreon and sign up for as little as $2 a month. 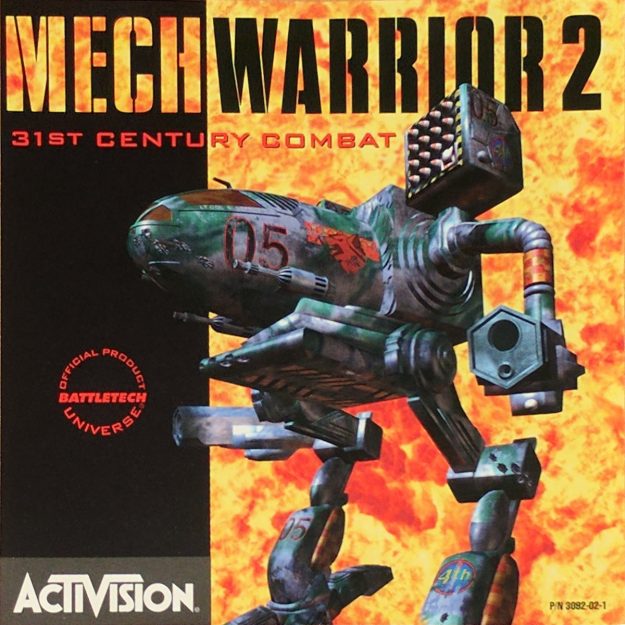 Emil from The Art of BattleTech recently guest starred on the DOS Game Club podcast where the subject of the episode was MechWarrior 2: 31st Century Combat. The game that truly catapulted the series to its legendary status and cemented ‘Mech combat as its own video game genre, DOS Game Club spent just over three hours discussing the development, gameplay, and legacy of MechWarrior 2. It also started with the audio of the intro cinematic, which brings back so many memories even without the visuals.

I knew quite a bit of the development of MechWarrior 2 from a deep dive into the 1995 classic from a few years ago, some of which was discussed during the podcast, but a lot of it was MechWarrior 2’s overall gameplay and its contribution to gaming history. No spoilers, just listen to the podcast. And of course, check out The Art of BattleTech on Twitter for even more tidbits (and some great art) from your favorite BattleTech games.

More LAMs For The LAM God

Despite the quality of the image, it doesn’t seem to have created any LAM converts, judging by the comments. I’m still of the mind that LAMs should stick with their anime roots, but maybe if they had designs like this one I’d change my mind. 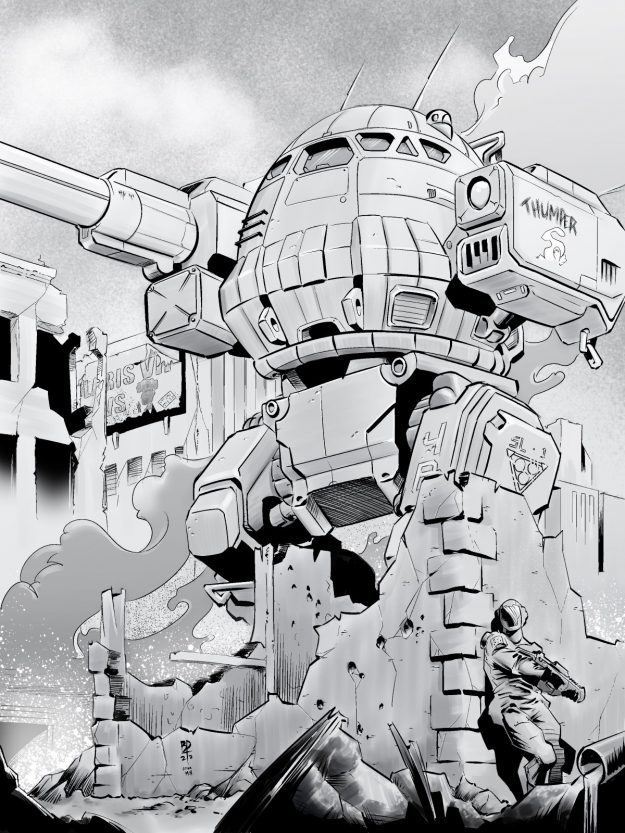 Our second Bruce Patnaude piece showcases the venerable UrbanMech in its natural environment. It occurs to me we still haven’t discussed the severe restrictions placed on the UrbanMech due to its awful performance in several key BattleMech metrics, but I’m sure we’ll get to it eventually. It’s gotta be special for this little trashcan. 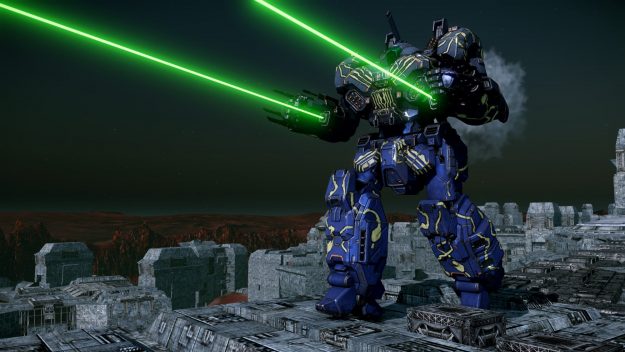 Ever since the Unseen drama ended with the designs returning to BattleTech, fans have asked for the Crusader to be added to MechWarrior Online almost as much as they did the Rifleman, Marauder, and Warhammer. For some reason, those requests were… I don’t want to say “ignored,” but definitely filed for later consideration, which has taken years for those requests to finally be considered. And now, the Crusader is finally in MechWarrior Online.

Added in the latest patch, the Crusader comes in four different variants (the CRD-3R, 5K, 5M, and 7L) as well as the “Crael” Hero variant. All variants get +10 armor to the torso and legs as well as +15 armor for each arm, bringing it to rough parity with other Inner Sphere heavy ‘Mechs in terms of toughness. I’m no ‘Mech guru so I couldn’t tell you what the meta variants will be, but I’m lookin’ at the 3R for that extra top speed.

June’s update also brings an all-new map to MechWarrior Online. Vitric Station is based on the Vitric Forge Faction Play map, which is a high-tech installation located on a red planet. High ground snipe lines are interrupted by larger structures in the middle along with ramps to bridges that will provide light ‘Mechs with quick access to enemy positions. It looks like teams will spawn on either end of the map and then clash in either the dense urban environment of the upper section or fire across chasms in the lower area. The shimmering blue sun is a nice touch.

Snub Nose PPCs, Heavy Gauss Rifles, and Light Machine Guns have all been buffed, while ER PPCs have been nerfed. For the rest of the balance changes and the few ‘Mechs that have received slight quirk adjustments, check out the patch notes here.

One more before bed. Here is a Zeus. from battletech

I love the Zeus. It’s not not quite a bad ‘Mech, but having that AC/5 on the 6S model gives it a hint of that bad ‘Mech flavor. But the design just oozes charm, from those massive shoulders to the distinctive cockpit to that iconic arm-mounted missile launcher. There’s a reason why the Zeus is a classic that’s withstood the test of time.

Here’s a Zeus courtesy of meltdonw14 on the BattleTech subreddit. It gives me the vibe of something you’d see in the middle pages of one of the earlier BattleTech novels back when they still had a few illustrations in them.

Just a personal render this time, for one of the heroes in my Current Battletech (2018) run, so here, enjoy my best Melee/Flank alpha striker. The Cicada :D from battletech

We haven’t heard from the Lego BattleTech fans in a little while, so here’s a Lego Cicada from Shotgunfrenzy. The Cicada is just one of those ‘Mechs that can’t stay down despite being an objectively terrible design. I’m not sure why I haven’t covered it in a Bad ‘Mechs piece, but I’m sure the Cicada‘s day is coming.

But you can’t deny that the Cicada is a ‘Mech with an unmistakable style. You know when you’re fighting a Cicada that it’s probably just going to run away until it can lull you into a false sense of security and then stab you in the back with it’s two medium lasers. Plus, you can never really tell if the lasers are coming from the arms or the side torsos. A mysterious ‘Mech, the Cicada.

Earlier this month, we sat down with Gaming Jay to discuss his personal fan project creating a new version of the classic Crescent Hawk’s games. Called Battle Mercs, the game combines the metagame features of the Crescent Hawk’s games with an updated real-time combat engine that’s been compared favorably to Faster Than Light’s. Gaming Jay had been looking for private alpha testers earlier in the month, but now he’ll be looking to gather more data thanks to Battle Merc’s first public release.

Head on over to Gaming Jay’s Google Drive to pick up your free public alpha. Keep in mind that this is still an alpha version of Battle Mercs, so it likely won’t be entirely feature complete and there might be a few bugs to contend with. Jay is looking for feedback, so be sure to join the Battle Mercs Discord to discuss the game.

I mostly wanted to bring attention to this piece by SU-SMD of Reddit user SupriseFormer’s merc company due to the Bombardier in the background. In an era where Archers are literally a dime a dozen, it’s nice to see the Bombardier strut its stuff. There’s also a Valkyrie, a ‘Mech that deserves more credit than it’s given, and a Marauder but for me, it’s the Bombardier the show.

Yes, This Is A Hammerhead Miniature You Need To Buy 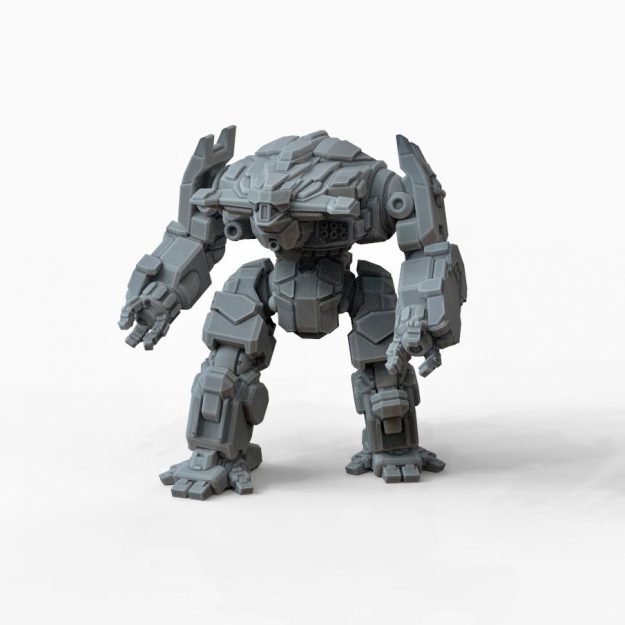 And just in the nick of time, Catalyst comes in with some great new products for June. The Hammerhead just got its first ever miniature design and that’s something worth celebrating. A 45-ton ‘Mech made by Clan Sea Fox during the Dark Age, the Hammerhead was a workhorse design that was sold far and wide. It’s Hardened Armor made it tougher than any sub-50-ton design ought to be, and its spread of energy weapons and Streak SRMs made it a threat to nearly anything at long range.

All profit from Hammerhead sales are being directed to cover the healthcare costs of one of the owners of Iron Wind Metals who has sadly been diagnosed with terminal cancer.

Catalyst has also brought back the Warrior Trilogy in both hardcover and leatherback cover forms, and there’s a new novel from Bryan Young on the horizon. A Question of Survival will focus on Clan Jade Falcon’s efforts to rebuild after their loss on Terra, with the easiest way to replacing dead MechWarriors is to simply take them from a neighboring Clan. Expect A Question of Survival to receive a release date soon.

And that’s it for June! Join us next month for all the BattleTech news that’s fit for human consumption (and some that’s only been rated for dogs and cats).

One thought on “Your BattleTech News Roundup For June, 2022”