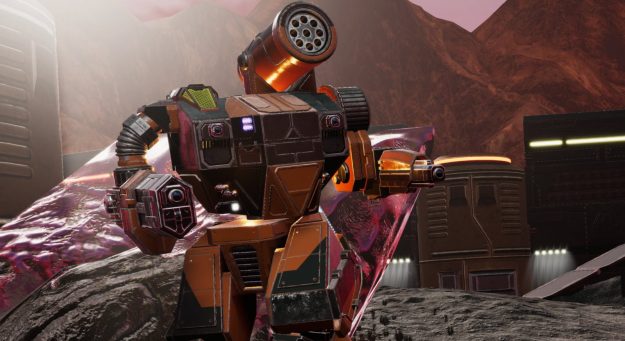 Welcome to your March news roundup in the wide world of BattleTech! As the coronavirus pandemic rages on, I’m self-isolating at home and scouring the internet for the latest in BattleTech news. Believe it or not, just because the world is shutting down due to a viral outbreak doesn’t mean BattleTech‘s gears stop churning.

Anyway, we’re not going to dwell on all the awful stuff that’s going on since you’ve got lesser news organizations for that. Instead, we’re going to get caught up on what’s happened this March in BattleTech. Let’s get to it!

The Summoner Is Now In Wolves

Wolves, the fan-made MechAssault remake that we previewed a few months ago, now has the Summoner (or Thor, if you’re a Spheroid) as a pilotable ‘Mech. I really like how they redid the Summoner, from the more angular cockpit to the torso-mounted lasers. They even posted a gameplay video of the Summoner in action and it definitely looks like a 70-ton ‘Mech lumbering around.

The team working on Wolves has also got an Atlas under development. Stay tuned for when that will be available in the downloadable alpha, which you can grab here.

The full Atlas reveal will happen in the form of a trailer we're thinking. What are some of the things you guys would like to see in an Atlas trailer? pic.twitter.com/33hQVdnFnd

Bombadil Leaves No Guts No Galaxy

This actually happened last month, but it definitely bears mentioning. Bombadil announced that he was leaving No Guts No Galaxy and the gaming industry in general to pursue other interests. Everything has now been handed over to Phil, including the Twitch channel, podcast, and Twitter account.

Hey everyone, it's been an epic 10 years, but I am parting ways with the gaming industry and streaming. @NoGutsNoGalaxy is now fully owned and operated by Phil, and I wish him much success and happiness with it. Peace and love to all! pic.twitter.com/Xpub7iGaQ9

We don’t know what those other interests are, but we definitely wish Bombadil luck in whatever he chooses to pursue.

At the Star Colonel level of backing and above, Clan Invasion Kickstarter backers were rewarded with having their names added to the official BattleTech canon. This guarantees that their name will appear somewhere in sourcebooks or fiction, although the precise details of that were to be discussed at a later date. 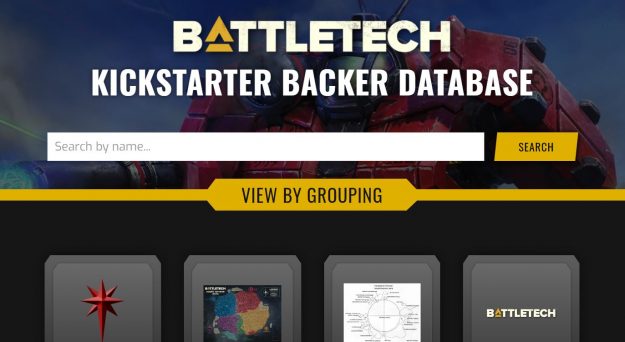 In order to get everyone to provide their info, Catalyst has set up a website where backers can add their personal (or online persona’s) info. I see Tex has already added his “Randolph P. Checkers” character to the database, and there are plenty of other colorful characters for you to peruse there as well even if you haven’t backed at the $300 level.

If you’re a backer, head to the website now to get your name added to the list of soon-to-be canon characters.

Well, this was almost inevitable, but with the coronavirus shutting down businesses all over the world, Catalyst has announced that the Clan Invasion will be further delayed.

Since Catalyst Games is a mostly virtual company, its operations are continuing as per normal. It’s everything else that’s coming to a screeching halt, and there’s not much that can be done about it other than wait it out. 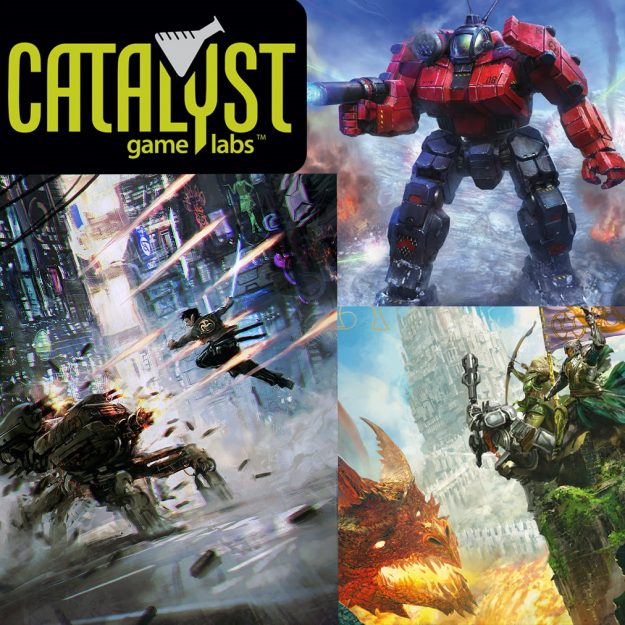 Catalyst says the delay will be “several weeks” for production and shipment, and that they’re “exploring alternative options to mitigate delays, including domestic U.S. printing.” We’ll keep everyone up to date on this one.

In the meantime, Catalyst has a 20% off sale on everything in their online store, with an additional 20% off for non-BattleTech, non-Shadowrun products. I’m not sure what those are, but you can head on over to Catalyst’s website to check out the deals.

Project XLRP2 gets a new name "Battletech Revised" from Battletechgame

Harebrained Schemes might be done with BATTLETECH, but that doesn’t mean BattleTech fans are done with it. Originally called BATTLETECH XLRP when it was announced two weeks ago (which stands for Extensive Lore and Rebalancing Project), it’s since been given a more descriptive title of BATTLETECH Revised.

According to the earlier Reddit post, a “crack commando team” plans on taking BATTLETECH and rebalancing everything to be less in-line with the tabletop game and more interesting from the strict video game perspective. This means that hardpoints might be changed, damage values will be tweaked, heat will be toned down or turned up (depending on the laser/PPC), and new, non-canon variants of ‘Mechs might be added.

This sounds like a pretty ambitious project and one to keep an eye out for. I can honestly say that certain weapons in BATTLETECH definitely feel underpowered due to adhering too closely to the tabletop rules, so this might be a way of changing things up to make more ‘Mechs and builds viable at higher difficulties.

No news on when BATTLETECH Revised will release, but expect more details “soon.”

MechWarrior 2: 31st Century Combat originally released with a manual that pretty much copied the weapon damage values from the tabletop game. However, anyone who actually played the game can tell you that they were utter BS. PPCs and LRMs did WAY more damage than they should, while Small Lasers were like shooting someone with a squirt gun.

Someone has finally gone through each and every weapon in MechWarrior 2 and figured out what the REAL damage values are. Kudos to you, Pixelmusement, for taking the time to go through every weapon and see what’s what.

I thought this was really neat and well worth a look.

Toy Galaxy Takes A Look At BattleTech: The Animated Series

The Wild History of Battletech: The Animated Series - Yes, It's Real
Watch this video on YouTube.

Finally, YouTube channel Toy Galaxy did an interesting dive into BattleTech: The Animated Series. The video specifically looks at the cartoon and the toys that it generated, as well as the rival cartoon from Harmony Gold and the ludicrous legal battle that ensued. It’s an angle on the Harmony Gold thing that rarely gets coverage thanks to the Unseen ‘Mechs, and is again, well worth a look.

One Last Thing: Catalyst Made A BattleTech Coloring Book

Some of you might be bored because of this whole coronavirus thing. Others might have children at home due to school closures. Or maybe you just like pictures of big stompy robots. But for whatever reason, Catalyst has created a BattleTech coloring book. 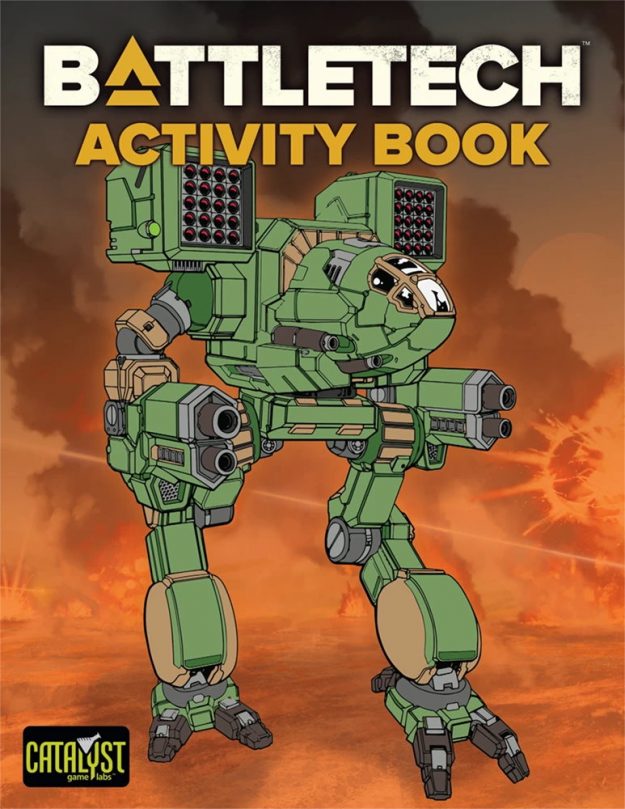 It’s pay-what-you-want, which of course means “free” in my lexicon, but you do you. The BattleTech Activity Book is 56 pages and contains line art from the upcoming Clan Invasion as well as the previous Inner Sphere BattleTech Box Sets. Currently, you can only print it out in PDF form, but soon there should be a physical copy that you can order. It will likely cost more than $0, though.

That’s it for March! Join us next month for another BattleTech news roundup.

And as always MechWarriors: Stay Syrupy

6 thoughts on “Your BattleTech News Roundup For March 2020”