Man, March turned into a whirlwind of announcements! First it was MechWarrior Online getting a controversial patch, then MechWarrior 5 getting a Steam release date, and then MechWarrior Living Legends announced that they’re making a sequel mod. Plus there’s an update from Catalyst on the Clan Invasion Kickstarter, and as always, some delightful new art to share from around the web.

So no more small talk. Let’s get to the news!

Shrapnel Celebrates Its First Year And Updates On Wave 2

We’ll get the good news out of the way first. Clan Invasion Wave 2 is on track to start shipping out in May/June, according to the most recent Kickstarter update. Manufacturing should be done by the end of the month, with freight happening in April. 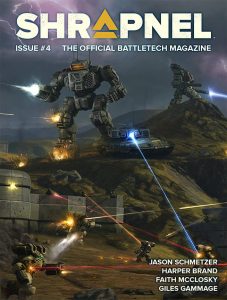 There are, apparently, a few things that are running “a few weeks behind” due to delays, but Catalyst isn’t letting that delay Wave 2 shipping. No word on what those items are, but they better not be my goddamn Urbie plushes or I will start a riot.

In other news, Shrapnel – The Official BattleTech Magazine has just completed its first full year of print. That’s a pretty big deal, if you ask me, as Shrapnel has a lot of BattleTech content you won’t find anywhere else. And these magazines aren’t like picking up a copy of People--they’re more like grabbing the latest Reader’s Digest or National Geographic with 160+ pages to go through. This includes stories from vets and first-time authors, actually playable scenarios for your next tabletop game, and tons and tons of new art.

Frankly, they could use more art, but I’m not complaining about what we got.

New this month is Fall from Glory, the Founding of the Clans series’ first book, as well as Fang and Claw, a short story from Michael J. Caravella. That’ll come to Clan Invasion Kickstarter backers Ristar and above, with no word on a wider release as of yet. Check your emails for the link for this short story. 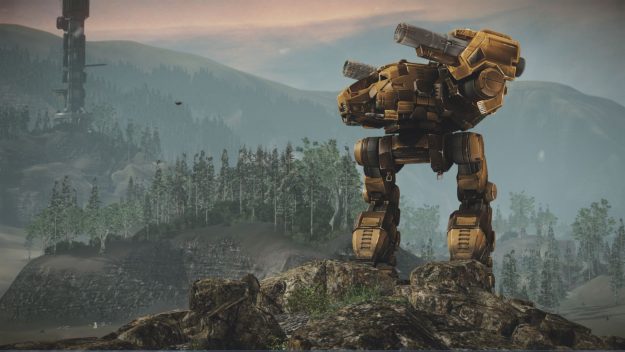 MechWarrior Online recently got its first major patch in two years, and wow, people were not happy. There were a few map tweaks, some new trials ‘Mechs that don’t suck, and a few other miscellaneous tweaks and bug fixes (not the least of which was a new intro that won’t blow out your headphones every time you boot the game up).

But the new patch also included some weapon and equipment changes that nobody really asked for. You can go over the exact numbers on the MechWarrior Online website, but in general, PPCs do 20% more up-front damage at the cost of 20% less DPS. That means a far slower recharge rate than you might be used to.

The reason for these tweaks as given by PGI was to open up more “space” for other weapon tweaks down the road and to make PPCs (and Gauss Rifles) more specialized weapons. In this case, specialized means dedicated sniper weapons. You get a whole bunch of bang, but if you can’t reposition while your PPC/Gauss recharges, you’re kinda pooched.

There’s a lot of talk online about this patch being an overall nerf, but I don’t think so. They certainly succeeded in making PPCs/Gauss Rifles into sniper weapons, and in the hands of a coordinated lance, this means trained PPC fire can bring down a ‘Mech in a single salvo. In those scenarios, the longer cooldown doesn’t matter because the target is already dead.

But I don’t play in those sorts of matches. I just play in PUGs, where it’s basically controlled mayhem every match. A 7-second Clan ER PPC cooldown means that my Nova-A has absolutely no ability to plug a hole in a line if the enemy side charges. I’ll get one shot off and then I have to wait an eternity to fire again, at which point faster-firing Medium Pulse Lasers or SRM-6s have chewed me to pieces.

To me, this change doesn’t feel great. It pigeon holes PPC-boating ‘Mechs into dedicated snipers and punishes pilots with poor aim. That’s fine for pro players, but for a game that’s trying to encourage a renaissance with new blood, it just seems too unforgiving to newbies to be the right call.

To me, the changes to PPCs/Gausses (and even the MASC changes that were included) feel like PGI is just trying to introduce some sweeping changes to the MechWarrior Online meta. I get that--established MMO and online service games do it all the time to keep things fresh and interesting. But it’s easy to get carried away with that sort of thinking and make changes that look like they’ll really shake things up on paper but really don’t feel great for existing players.

Plus, MWO players are a curmudgeonly lot that don’t take change particularly well, especially if they didn’t ask for it.

On the plus side, MechWarrior Online is giving away a free Grasshopper-5H for the Month of March and also hosting a public test server with a slew of changes that have been suggested by a group of players calling themselves “The Gulag.” Those changes include an overhaul of pretty much everything based on input from both casual and professional MWO players alike, so it’ll be interesting to see how it compares to the latest official patch from PGI.

UPDATE: Oh hey, looks like PGI has decided to rollback the weapon and MASC changes in the latest patch after all. I gotta say, that’s a big change for PGI, which has typically ignored public outcry from its players after unpopular changes. If that’s not a positive sign, I don’t know what is.

Jade Falcon Turkina Assault Mech – started off as a technical drawing, got carried away with action and weapon effects! from battletech

Redditor SU-SMD apparently started this image as a technical drawing, but then it got away from them in a very great way. I don’t think I’ve ever seen the Turkina portrayed better.

MWO EU Server Lost In Fire, Same One That Took Down Rust 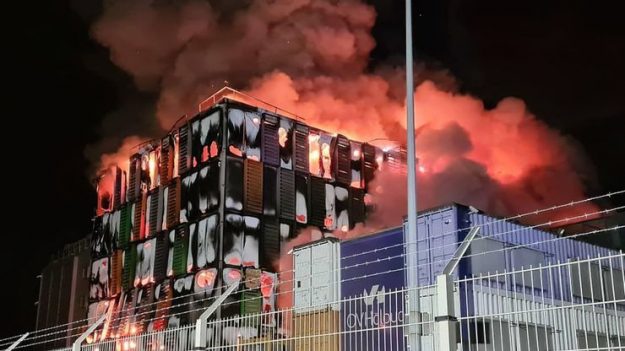 The game Rust also hosted its save data at the same location and suffered far worse losses. Monthly backups meant that it wasn’t a total loss, but community-hosted servers that didn’t have backups were just… gone.

MechWarrior Online got a new server the next day and is back and running for you fancy Europeans, so there’s no need to deal with a 200 ping when you’re playing with me here in North America.

MechWarrior 5: Mercenaries Gets A Release Date On Steam, GoG, and Xbox 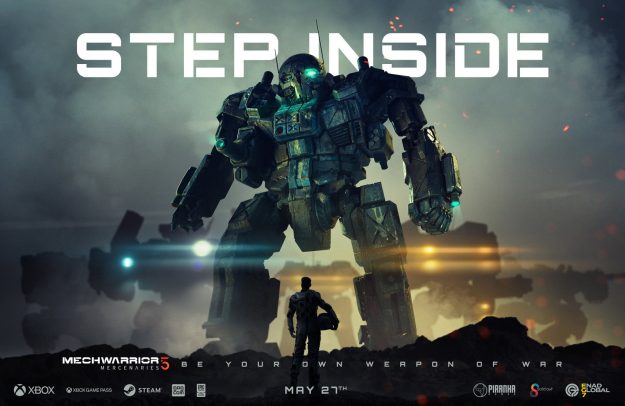 Hey, so, remember when MechWarrior 5’s Steam release got delayed till the spring, but then PGI said that they’d also come out with the Heroes of the Inner Sphere DLC as well as an Xbox release at the same time? Well, we’ve got a date: May 27.

The news came first from EG7, the new owners of Vancouver-based developer PGI, with the official MW5 sources following suit a day later. Those MW5 sources also gave us our first look at the Heroes of the Inner Sphere key art, which features a pretty snazzy Atlas if I do say so myself.

“We are very excited to also be able to give Xbox and Steam players a good dose of MechWarrior fun,” said EG7 CEO Robin Flodin in a statement. “It is also great to be able to present yet another example of the EG7 companies working together to bring a world-class title to market.”

The funny part (at least to me) is that MechWarrior 5 was initially delayed from December to avoid getting stomped on by Cyberpunk 2077, and then Cyberpunk turned out to be a slow-motion train wreck. Now May is coming up with games like Biomutant, Subnautica: Below Zero, Resident Evil Village, and the remade/remastered Mass Effect trilogy, with more announcements being made all the time. It’s sort of an out-of-the-frying-pan-into-the-fire situation if you ask me.

But hey, if you were among the many who thought that the Epic Games Store release was like an early access preview, then the real deal is just two months away.

A teaser for a new Tex Talks

In the meantime, enjoy this preview image of the Marauder from Wild-Cat144 over on Twitter. I’m anxiously awaiting Tex’s next big project, and you should too.

Rather than use the Crysis Remake for MechWarrior: Living Legends 2, the fine folks at JPL Studios have decided to use the far more moddable MechWarrior 5: Mercenaries as their starting point. This makes creating another total-conversion mod much easier since a lot of the assets they’d be using (like all the ‘Mechs, for example) are already present in the game.

That and MechWarrior 5 is built on the Unreal 4 Engine, which just has more knowledge and support out there.

According to the Reddit post, alpha tests are coming “within a couple of weeks,” and MWLL2 project lead Nathan reports that the team will be hosting smaller stress tests before then to make sure everything works. Support will start out for 32-player matches, but that number might increase over the course of the mod’s development.

Nathan tells me that MWLL2 will follow the same format as the original mod, which is a sort of Battlefield-style persistent battle with matches focusing on taking control points for resources. The team with the most points gets declared the winner after roughly an hour of play.

Obviously, more MechWarrior is always great, but I think MechWarrior: Living Legends 2 has a lot going for it. First, it’ll be in a modern engine with way more technical support and it’ll be made by a proven team of modders with a passion for MechWarrior/BattleTech. Second, it might even add a multiplayer component to MechWarrior 5 that PGI has no particular interest in making. Sure, co-op campaigns are great, but competitive multiplayer adds a level of replayability that you just can’t beat.

From Mice To Elementals? 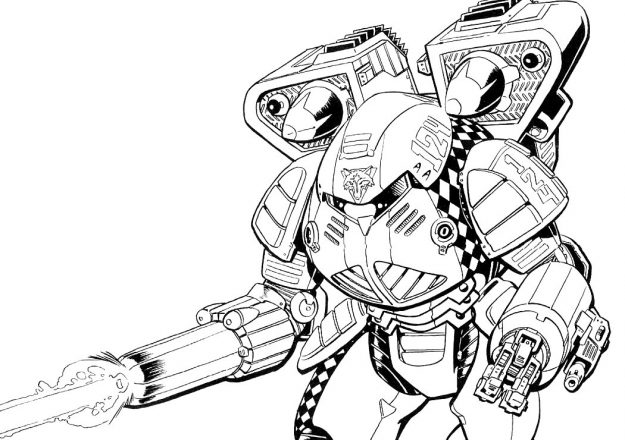 So, this isn’t exactly BattleTech news, per se, but it does seem to have a direct link to the BattleTech universe in that it’s yet another piece of technology common to the Clans in the far future that has just been invented right now. Thanks go out to an eagle-eyed Sarna reader for giving me the heads up.

A group of scientists in Israel has just grown a mouse embryo in an artificial womb. That’s according to the MIT Technology Review, who interviewed biologists at the Weizmann Institute of Science. The embryos were grown by adding blood serum from human umbilical cords along with a pressurized oxygen mixture.

The mouse embryos only lasted between 11 to 12 days before they grew too large for the glass containers they were in to continue supplying them with adequate oxygen, but the basic concept has been proven: conception without a womb.

The crux of the article is the huge ethical concerns such technology raises for humans, specifically with the ongoing abortion debate. However, for us BattleTech nerds, this is the first step towards a true Iron Womb.

And that’s all I got for March! Join us next time for more BattleTech news, and hopefully some teasers for Heroes of the Inner Sphere.

6 thoughts on “Your BattleTech News Roundup For March, 2021”