Hey, it’s May, and BattleTech is pretty okay! Sorry, that’s the best I could do to complete the rhyme.

Today, we’re going to completely ignore coronavirus just like an anti-lockdown protester and instead focus on all that’s still good in this world. And as we all know, the only things that are good are giant stompy robots.

Welcome to your BattleTech news roundup for the month of May. Let’s get this party started.

PGI Is Hiring For MechWarrior 5 Development 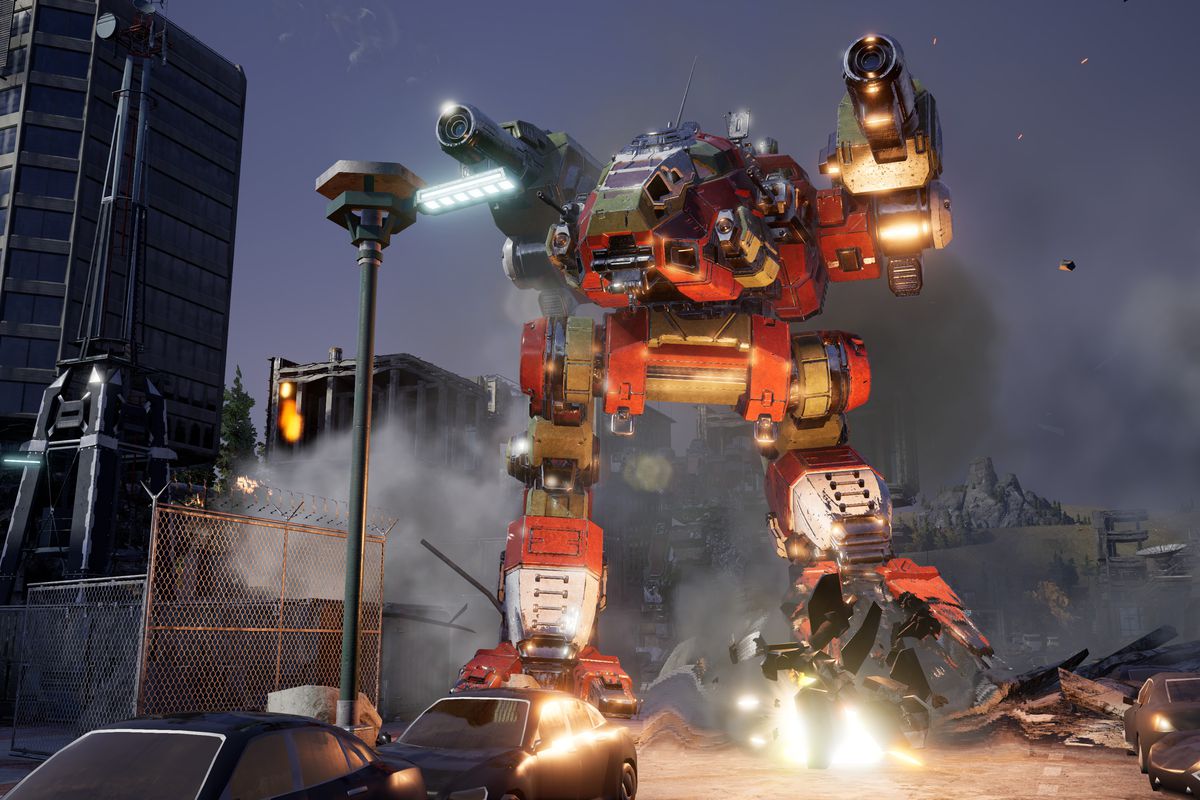 We begin our monthly roundup with some big news from MechWarrior 5 developer PGI. They’re hiring! Eight new positions have opened up at PGI, including some pretty senior technical positions like Level Designer, Principal Animator, and Senior Game Designer.

As some of you know, PGI is also the development studio behind MechWarrior Online, but these positions are all calling for Unreal 4 Engine experience, and that means MechWarrior 5. MechWarrior Online runs on Crytek, an engine that’s both much older and much worse than Unreal 4. Think of Crytek as the Java of game engines--inefficient and nobody really uses it anymore.

I kid! Please don’t send me angry emails filled with Java code that will ruin my computer if I ever accidentally click the attached files.

Anyway, the fact that these are very key positions that are looking to be filled sort of implies that PGI might have lost a few people after the launch of MechWarrior 5. There’s no way you can make a game like MW5 without an Animation Lead or a Level Designer, so I’m thinking that those folks peaced-out after the game launched last year.

As we found out last month, PGI is delaying the release of MechWarrior 5‘s first DLC pack, and these empty positions might have something to do with it. That and the sudden shift to working from home and the up-ending of the global economy.

Benefits of working at PGI include flexible schedules, comprehensive benefits, and beer Fridays. Although, with everyone working from home, every day could be beer Friday. I’m having a beer Friday right now!

We Got Two New BattleTech Books!

May is turning out to be the month of BattleTech fiction for 2020. We’ve got two new novellas to tide us over until the release of IlClan, and both of them deal with events leading up to the ascendancy of Clan Wolf (I’m guessing--I don’t actually have any inside leads with Catalyst on plot development). 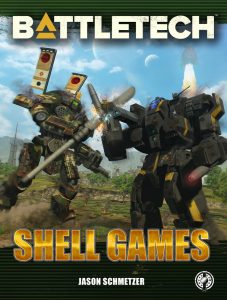 First, we have Jason Schmetzer with Shell Games. This book has to do with the Republic of the Sphere‘s incursion into Draconis space following the fall of Fortress Republic. Paladin Max Ergen sets out to capture Dieron, a Draconis district capital and home of the Dieron Regulars, but Warlord Kambei Okamoto won’t let the planet fall without one hell of a fight.

Renowned BattleTech author Blaine Lee Pardoe did a review of the story on his site, and said that “Schmetzer does a great job of taking two paragraphs of sourcebook and turning them into a story of characters, strategy, and honorable struggle.”

Speaking of Pardoe, he’s got his own book out now that also deals with Dark Age-era events. This time the focus is on Wolf’s Dragoons, the storied mercenary company that we all thought was done for after Outreach got nuked during the Jihad. They’re actually still around, and they even have a few regiments operating by the time the Fortress Wall fell. 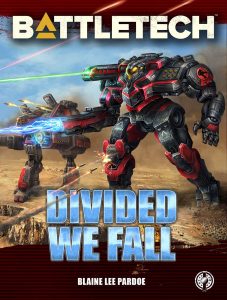 In Divided We Fall, Alaric Wolf tries to convince Wolf’s Dragoons to return to the Clan that spawned them by sending an envoy: Marotta Kerensky. Will the Dragoons once again become Wolves, or will they keep fighting for the freedom of the Inner Sphere against Clan aggression?

Pardoe gave us a teaser earlier this month, treating us to a brand new ‘Mech on the cover of his book. It’s called the Dominator,  apparently the brainchild of Pardoe with a few tweaks by BattleTech art director Brent Evans. Speculating based on its appearance, its armament consists of an SRM-6, a PPC, either a Large or Medium laser in the right shoulder, and a rear-facing Small laser (which Pardoe confirmed in the teaser). Class, weight, and movement profile are unknown, but given the Linebacker right beside it, I’m guessing it’s on the heavier side of Medium-class.

Both Shell Games and Divided We Fall are available now wherever fine e-books are sold. Or you can just follow these links.

Pardoe Also Did A Fun Jihad And Dark Age Summary 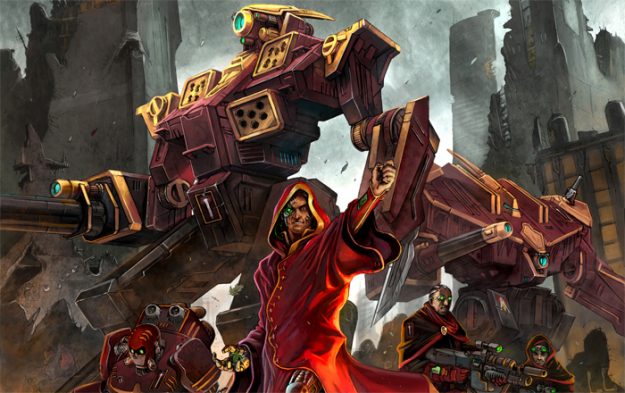 Not every BattleTech fan has kept up to date with current events. Some of them don’t know their Reaving from their Jihad from their Dark Age. That’s fine; Blaine is here with a fantastic way of getting lapsed BattleTech fans up to date.

Pardoe wrote a hilariously snarky TLDR of all the BattleTech events following the FedCom Civil War, from Jihad all the way to the fall of Fortress Republic.

“Almost all of the major characters, mercenary units, and a few billion passersby are killed in a fate worse than death: killed ala sourcebook footnote,” writes Pardoe, followed up by this gem about Inner Sphere savior Devlin Stone: “Stone wears a ball cap that says, ‘Make the Inner Sphere Great Again!’ – true story!”

You should read the whole thing over on his website, and also direct any BattleTech fan you know to bookmark it for future reference. And even if you already know the full series of events, it’s still well worth a read.

Consider this a little preview for an article I’ve been pondering on just what mods you should get for MechWarrior 5. Mod support is perhaps the best thing about the latest MechWarrior game, and mods vastly improve MechWarrior 5 over the vanilla experience.

For example, night vision. The base game’s night vision is pathetic--you can barely see past your Atlas‘s big toe. With the Clear Night Vision mod on, you can see everything through two different choices of night vision. You can set your ‘Mech’s HUD to produce that typical green glow that society has come to readily associate with night vision since the Gulf War, or you can get a full-colored version that more readily approximates current technologies.

Phil at No Guts No Galaxy recently reviewed the mod, and I gotta say, the difference is night and day. I’ll show myself out…

Check out the mod in the video above, and stay tuned for a list of essential MechWarrior 5 mods.

Battletech/Mechwarrior Lore : Exodus to Elementals - A Primer on the Clans [Part 2]
Watch this video on YouTube.

I’ve talked to Tex before about his video series which has only grown in popularity since then (not saying I might’ve had something to do with it or anything; his work stands for itself). His Clans Primer is probably the best work produced by the Black Pants Legion to date, and I’ve been eagerly awaiting Part 2 ever since. It’s only fitting that it was released on May 20, just in time for the anniversary of the Battle of Tukayyid.

It’s hard to give spoilers for a story that you already know the ending to, but if you watch any Tex Talks BattleTech, watch this one. And then go back and watch the rest.

I’ve seen this guy post on the BattleTech subreddit a few times and have always been impressed by his work. If you’re not aware, Metal Core Collectibles is a series of not-quite BattleTech figures that are sort of like Mech Merc Commander from last week--BattleTech-inspired without actually having the license. They’re definitely made by a BattleTech fan though, and that shines through in the designs. I mean, there’s even a hex map in the background of most of the site’s images.

As far as I can tell, Metal Core Collectibles’ two designs--the Hammerhead and the Tyrant--are basically fan designs that somehow grew into their very own custom figurines. Both the Tyrant and the Hammerhead come in multiple variants so that you can get one with the weapons you want, and there’s a whole bunch of tanks, APCs, and choppers to buy too.

Personally, I really like the Tyrant. It looks like a Centurion-style medium ‘Mech, and I’ve always appreciated workhorse designs like that. I’m not sure if BattleTech-appropriate specs even exist for it, but it still tickles my love for giant robots.

And since Metal Core is owned by a BattleTech fan, they’re also hosting a sale in honor of both their first anniversary in operation and the Battle of Tukayyid. That’s 25% off anything in-store from now until May 27 using the code “Tukayyid2020”. Go check ‘em out.

That’s it for May! Join me next time as we explore what fresh hell June has in store for us.

4 thoughts on “Your BattleTech News Roundup For May 2020”