It’s May, and I’m finally vaccinated! It hurt like hell and I was feeling like hot garbage for several days, but it’s a small price to pay for life to get back to some semblance of normal. A normal that probably won’t come for at least several more months as more people need to be vaccinated. And then we’ll all have to get boosters as we accept COVID as a seasonal disease like influenza.

But whatever. As far as I’m concerned, May is full of good news, and that includes BattleTech. So let’s get to it!

There are two big news beats for May, those being Catalyst and the imminent shipping of Wave 2 of the Clan Invasion Kickstarter, and MechWarrior 5 releasing on Steam. We’ll start with MechWarrior 5: Mercenaries because it’s just days away from arriving.

All the deets recently got published on the MechWarrior 5 and MechWarrior Online websites. The base game will clock in at $29.99, while the Heroes of the Inner Sphere DLC will hit you for another $19.99. Not a bad price for those who’ve been willing to wait for the game to release on Steam.

Ahh, but MechWarrior 5 isn’t just getting a Steam release! The game is also coming to the Xbox One and Xbox Series X/S, making it the first console MechWarrior game since MechAssault 2. And if you’re a PC snob, you can even get it on GoG too.

Even better, MechWarrior 5 will have full crossplay across all platforms. For co-op play, only the host will need to have purchased the DLC to give access to everyone playing, so if you’ve got your lancemates already arranged you can save a few bucks with only one of you purchasing Heroes of the Inner Sphere.

A massive free game update is also coming with the Steam release, which includes a revamped intro sequence, the ability to skip the tutorial, rebalanced difficulty and economy, and greater variety in missions and maps. There’s even going to be infantry running around so the levels will feel more like an actual planet and not just some ‘Mech-sized set-piece.

We’ve already gone over most of what Heroes of the Inner Sphere will get you (such as a new career start option, seven new ‘Mechs, new missions, biomes, and equipment), but you’ll also get an expanded Inner Sphere map with 18 more warzones and 11 more side quests.

MechWarrior 5: Mercenaries and Heroes of the Inner Sphere releases on May 27 for Steam, GoG, Xbox One, and Xbox Series X/S. Wishlist now and you can get 1,250 MC in MechWarrior Online by posting to this forum thread.

And now for the news you’ve all been waiting for: Clan Wave 2 shipping is imminent! I just got an email warning me to update my shipping address if anything’s changed between now and Wave 1 (if your address is the same listed in the email, then there’s no further action required). Catalyst is still waiting on one last container shipment as of May 20, and I have no idea how long it takes for a box to cross the Pacific ocean (or even if it necessarily is arriving via the Pacific), but I’d say a June delivery is likely. 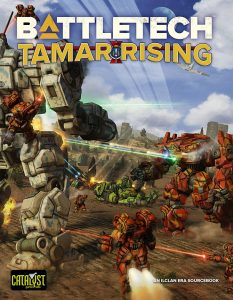 Catalyst also treated us to a State of the Game update earlier in May that revealed an equally momentous occasion: The IClan sourcebook arrives in June too! Get the full story for the Battle of Terra, including tactical maps, new ‘Mechs, and insights into how the other Great Houses reacted to this momentous conflict.

There’s a whole list of things coming in the next few months! Recognition Guide: IlClan gets its fourth cycle from August to November, Rock and a Hard Place brings the first new Gray Death Legion story in years in July, and Tamar Rising takes a look at the Tamar region of Lyran space during the Battle for Terra in September.

Check out Catalyst’s website for the full rundown on what’s coming in the latter half of 2021.

This Guy Added A ‘Mech Bay To His Computer 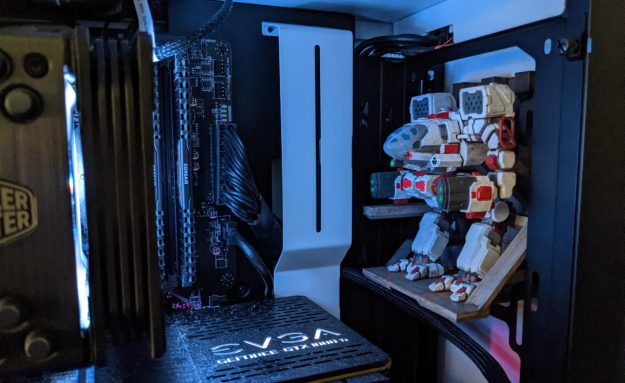 My computer hasn’t had a disk drive in some time, and even the days of my solid-state drives requiring a bay are numbered. When I eventually swap to NVMe drives, I’ll have nothing to put in the front of my case.

Nothing, except for a bad-ass ‘Mech bay.

Toukejin, thank you for creating this articulated Timber Wolf model and then throwing it on Thingiverse for me. Now I just need to find a 3D printer to make one of these for my next build.

Mechwarrior Online May 2021 Patch Review
Watch this video on YouTube.

We covered a lot of what’s going on in the May patch in my recent interview with the Cauldron’s Bear_cl4w, but a quick recap never hurts!

The biggest change with MechWarrior Online’s May patch is the reworked Canyon Network map. Spawn points and differences in cover have been fixed along with newly added ramps, bridges, and other terrain fixes that will make it a little easier to get around if you’re a non-jump-capable ‘Mech, but still provides a benefit for bringing a ‘Mech with jump jets.

April’s weapon pass has been fine-tuned with additional tweaks to various over-performing weapons, such as the Snub-Nose PPC, Clan Micro Pulse Laser, and Light Gauss Rifle. These adjustments hardly remove these weapons from viability, so all the cool new builds that came out of April’s patch will still work just fine. As always, the Cauldron is keeping a watchful eye on weapon performance for next month’s patch.

May also brought phase one of the ‘Mech agility pass. The Centurion, Hunchback, Hunchback IIC, Firestarter, Night Gyr, Timber Wolf, Atlas, and Kodiak are all more nimble to varying degrees to bring them into line with other ‘Mechs in their class. The Centurion and Hunchback IIC in particular were both extremely cumbersome chassis despite being medium-class machines, often getting outmaneuvered by ‘Mechs much heavier.

A few ‘Mechs also received armor and structure quirk alterations, namely the Stalker, Jagermech, Cicada, Jenner, and Jenner IIC. Generally, this involved providing more base armor to these fragile ‘Mechs while also redistributing their structure values somewhat so that they’re all tougher and hopefully more viable to bring into a pug.

I’ve tried the new Hunchback and Jenner, and both feel a lot better. I’m looking forward to my Nova getting the same treatment eventually.

Hired Steel: A Mech Machinima – Episode One
Watch this video on YouTube.

So I somehow missed Hired Steel‘s debut episode on Sarna’s April news blast, which is an unforgivable offense given how this is quite possibly the most amazing fan-made BattleTech machinima ever made. For those that missed it (including myself), I’ll embed the video above.

Now that you’ve seen it, here’s No Guts No Galaxy’s Sean Lang’s interview Constantin “Iqfish,” Hired Steel’s creative director over at TMC. Apparently, this whole thing got started as a COVID project since Germany had a bunch of lockdowns that resulted in reduced work hours for most of the population. With more free time, TMC came up with this amazing new video series.

Now that vaccines are rolling out and lockdowns are easing, I certainly hope TMC finds the time to continue this project to what will almost certainly be a thrilling conclusion.

Earlier this month, Wolves got its Wave 2 update, including the Raven, Raptor II, Hellbringer, and Mad Cat Mk II. And to celebrate the occasion, New Day Fiction gave us this sweet new trailer. The maps are all still fairly basic-looking, but they’re working on it.

Oh, and Wave 3 is currently in development. No word on what ‘Mechs that will include, but there’s a hint on the Wolves Twitter suggesting that the Puma will be in it. The Puma isn’t as cool as the Cougar, but it’s still a worthy addition and a ‘Mech we don’t see all that often in MechWarrior games.

As always, you can download Wolves and play for free from their website. If you’re a fan of MechAssault, then you’ll love Wolves.

How About Some Ostsol Love?

Ostol OTL-4D – Redesign Concept Sketch: take a derpy mech and try to make it look threatening… and facing to the right! from battletech

The Ostsol is a ‘Mech that doesn’t get nearly enough love. Especially the bizarre, spindly-limbed original drawings by Duane Loose. So when I saw SU-SMD‘s take on the Ostsol on the BattleTech subreddit, I just had to share it.

What I love about this drawing is how it combines the abstract and “rough” style of the original BattleTech card game with the more hyper-realistic style of modern BattleTech artists.

Someone drew a picture of Tex at his wedding to the Elemental. Enjoy. from battletech

Well, not really. But as the story goes, Tex had a VERY strong girlfriend at one point, so the meme is that he’s into big strong ladies, and it doesn’t get any bigger or stronger than an Elemental. Thus, the incredibly talented EldoniousRex created this image of Randolph P. Checkers on his wedding day with one very lucky Ghost Bear woman.

The lore of Randolph P. Checkers, Tex’s now-canonized character, still needs to be fleshed out with this story on Sarna’s wiki, so somebody hop to it!

And that’s it for May. Join us next month for more BattleTech action.