May showers have brought both flowers and flies, which for some reason have all come out and are buzzing around in my room as I write this. I’d be upset if I didn’t consider this to be the sound of summer.

As always, we got a ton of BattleTech news to get through, so let’s dive right in before this fly finds my beer. Ah, fuck, he’s already in there! Stupid flies…

MechWarrior 5 DLC Call To Arms Gets Pricing And Release Date 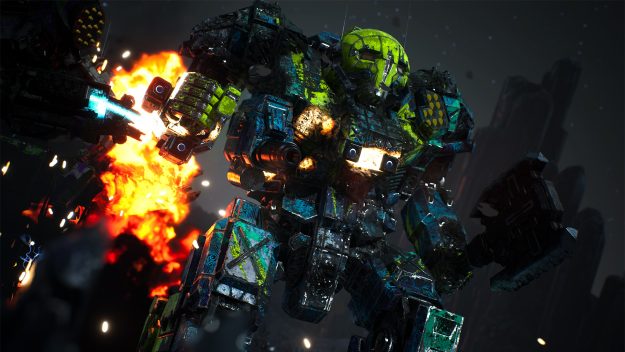 Last month, we found out MechWarrior 5‘s third DLC will be called Call to Arms, mostly because it adds an arsenal of melee weapons as well as the iconic Hatchetman medium ‘Mech. We didn’t know when or how much Call to Arms would cost, but we do now.

Unlike the Legend of the Kestrel Lancers and Heroes of the Inner Sphere, which debuted at $20, Call to Arms will be priced at $14.99 USD when it launches on June 8. Regional pricing means that’ll vary by platform and country, but US residents should expect to pay fifteen bucks. Canucks such as myself will have to pay something like $22.50.

Being five dollars cheaper than the previous two DLC might be indicating that Call to Arms will be somewhat lighter in content than the previous expansions. Although Call to Arms will add 28 new ‘Mech variants, five Hero ‘Mechs, nine melee weapons, and three new biomes, there’s no mention of any new story-based campaigns or scripted missions that’ll be coming with Call to Arms [Ed. My bad! There’s actually going to be a five-mission campaign where players snag the Hatchetman from the Isle of Skye].

I do get the sense that this is MechWarrior 5’s swan song, a little parting gift as PGI gets started on its next project. Whatever that is, hopefully it’ll include melee weapons at launch rather than as paid DLC later on. Then we can pay for something else, like, oh I dunno, Aerospace assets? 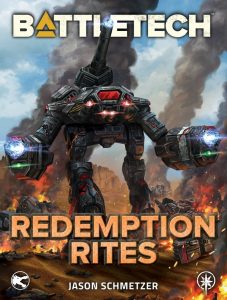 So, spoiler alert, but it’s been a few months since the release of Hour of the Wolf, so I think it’s fine for us to drop a few plot points for the current era of BattleTech. After Clan Wolf takes Terra and rises to the heady rank of ilClan, ilKhan Alric Ward makes perhaps the biggest mistake of his career. He snubs Wolf’s Dragoons after they made a terrible sacrifice to stop Malvina and Clan Jade Falcon. Even an ilClan isn’t invulnerable and even mauled, Wolf’s Dragoons is a terrible foe.

Jason Schmetzer tells the story of Wolf’s Dragoons in ilClan era, and it’s a story of revenge. Redemption Rites is available now on Amazon or wherever you buy books.

Once, the four elements lived in harmony. But all that changed when the fire nation attacked. Or the Salamander, I guess.

Avatar references aside, it never really made a whole lot of sense to me why Elementals were called “elementals” without having any association to the actual elements. Well, now they do, and geergutz does a great job of showcasing all for Elemental variant armors. These include the Salamander, the Sylph, the Gnome, and the Undine. The Gnome is a bit of a stretch for earth, but it is probably the most earth-bound of the Elementals that I know of.

Evolution Of MechWarrior’s Mechs In One Image

Battlemechs from MechWarrior 2: Mercenaries (1996) compared to Mechwarrior 5 (2019) from @PiranhaGames. I really like the camo textures and gradient skies from MW2: Mercs. Credit to @Flyingdebrisguy for a successful redesign of the iconic mechs.#Battletech#Mechwarrior pic.twitter.com/28MXMtbMUC

It’s sometimes hard to remember how far MechWarrior has come, but this picture from Adam Kusiak puts the game’s evolution into stark relief. I still love MechWarrior 2: Mercenaries, but damn, I don’t remember the Commando being quite so goofy lookin. The Atlas too looks ridiculously blocky, but I guess we gotta give Activision some credit for getting more man-shaped ‘Mechs into the series using such primitive hardware. It really makes you wonder where MechWarrior will be in another 23 years. 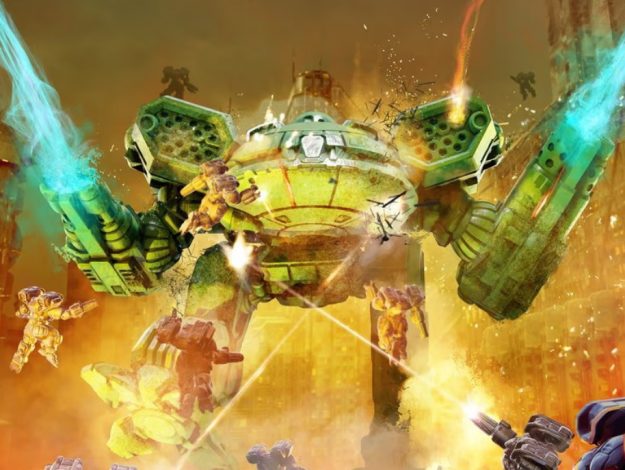 If you’re not subscribed to Shrapnel, the monthly BattleTech magazine, then you’ve been missing out on the fantastic Road to Tukayyid anthology. However, now you can at least listen to these short stories over on Anchor.fm. This isn’t just some guy speaking text aloud either--there are some exciting music and sound effects in there too. Definitely something to snag for your next road trip or to take with you to the gym.

Let's continue with Text Talks Battletech Warhammer art. This is the first big piece I created for the episode. That's the MWO Centurion on the right; my favorite version. This piece will be in the Warhammer pack. #battletech #mech #mechwarrior #RPG #tabletopgames #Mecha #scifi pic.twitter.com/21NWPWUe97

You’ve certainly seen Tex’s talk on the Warhammer by now (you’ve had a month, so there’s no excuse), and now it’s time for merch. Eldonious is promising an art pack containing many of the images seen in the Tex Talks BattleTech episode, including this one here. It’s great, Eldonious is great, and when the Warhammer pack eventually launches, I’m sure it’ll be great too.

Mark Nicholson has left PGI, makers of MechWarrior 5: Mercenaries and MechWarrior Online. We spoke to Mark not too long ago where he offered some insight into how new ‘Mechs are designed and the incredible talent required to bring these giant walking death machines to life. PGI has sadly lost a fantastic artist. We wish Mark well in whatever comes next.

PGI Is Not Working On Lord Of The Rings Online

Piranha Games isn't helping with Lord of the Rings Online
Watch this video on YouTube.

Another quick news bite courtesy of No Guts No Galaxy. It seems that PGI isn’t supporting Lord of the Rings Online after all. That comes directly from PGI’s Daeron Katz, so it’s most likely legit.

PGI getting taken off of the MechWarrior license to work as a support studio was one of the more depressing rumors that sprung up following the studio’s sale to EG7. With this rumor laid to rest, we now have absolutely no idea what PGI is working on aside from support for MechWarrior Online and MechWarrior 5. Silence could mean MechWarrior 6 is on the table, but we’ll have to wait and see if either PGI or EG7 makes an announcement.

Do you like MechAssault? Then you should check out Wolves, the free MechAssault fan game that’s getting better and better every day. But if you also happen to own Serious Sam Fusion, then you should check out this new mod courtesy of Andreiki. The mod adds both the Mad Cat and Atlas models from MechAssault 2: Lone Wolf. As you’d probably expect given Serious Sam is a game where you run around on foot with a machine gun, Andreiki is recommending that anyone who wants to use these models make them the boss of whatever custom map you’re trying to create.

Major BioMech, who first alerted me to this mod, has created a lovely video showcasing the Mad Cat and Atlas in action. Because it’s Serious Sam, you can equip yourself with a laser blaster and eventually take down this 75-ton monster, but BioMech wasn’t quite able to take down both a Mad Cat and an Atlas on the first try.

A while back, I dove into The Crescent Hawk’s Inception, the world’s first BattleTech video game. Originally released in 1988, the game was largely a text-based adventure game with some turn-based combat that vaguely resembled the tabletop rules. It had not aged well, to put it mildly, but if I’m honest, few BattleTech games have. And if I’m further honest, that hasn’t stopped me from reminiscing about MechWarrior 2, so I can’t judge anyone for doing the same about Crescent Hawk’s Inception.

The only difference between me and GamingJay is that I don’t go ahead and remake MechWarrior 2 from scratch in my spare time. Which is exactly what Reddit user GamingJay has done with the old Crescent Hawk’s game.

GamingJay is already so far along with their personal project that they’re even asking for alpha testers. You can shoot ’em a message on Reddit to ask for an alpha build of GamingJay’s retro BattleTech game and then offer your feedback for future development.

I’ve actually reached out to GamingJay and was able to briefly play a bit of alpha. It’s certainly an upgrade over the original, which now has a sort of real-time combat system reminiscent of Faster Than Light‘s. It goes a long way to making this game more interactive than the original Crescent Hawk’s games, and I think there are a lot of folks out there that might be very interested to give this home-brewed Crescent Hawk’s remake a try.

Give Me More Flashman Art, Dammit!

New here! Just thought I would introduce myself! I’m a old battletech fan falling in love with it again because of the recent renaissance from battletech

The Flashman is a ‘Mech that doesn’t get nearly enough credit from BattleTech fans. I loved the Flashman back in MechWarrior 2: Mercenaries and I lament how the Black Knight seems to have taken the Flashman‘s place as the 75-ton all-energy Inner Sphere heavy ‘Mech. Give me my pop-can laser boat or give me death.

How To Carry Around A Company Of Mechs In A Leopard

Mechwarrior 5 is a totally accurate Succession Wars game where you really have to scrounge for equipment, every mission is make-or-break from battletech

It always did bother me how a Leopard-class DropShip, which in the lore can only carry a single lance of ‘Mechs, somehow managed to carry an entire company’s worth plus however many I wanted in cold storage in MechWarrior 5. The answer is obvious when you think about it, but it took BipBeepBop123’s diagram for me to finally figure it out for myself.

Top 5 Things You should know about Skill Tree reconfigured
Watch this video on YouTube.

The latest MechWarrior Online patch, which actually topped a gigabyte, is easily the biggest to hit the game in years. That’s because one of the core systems in MechWarrior Online has finally been overhauled after years of complaints from all walks of MWO players. Casuals hated it because it was expensive and confusing, and pros hated how long it took to unlock the tree and how many builds wasted skill points due to the tree’s design.

Well, no more. The old skill trees are gone and now you can pick and choose what skills you want and click and drag to unlock as many as you can. It’s a lot simpler, faster, and cheaper than the old tree, and there’s no need for everyone to be refunded their skill points because they’re all still present in the new skill tree. All the same, PGI has gifted players five free skill points for every ‘Mech they own so MechWarriors can further customize their rides.

Besides that, the Rouchneck got a full quirk pass while the Flea and Timber Wolf had their quirks adjusted alongside several other designs. Clan ER Large Lasers had their duration extended to combat the blue line meta, and machine guns had their crit damage multipliers reduced to make light ‘Mechs slightly less deadly. Strangely enough, SRMs all had their heat reduced, so expect to see a lot of brawling splat-Cats in the very near future. There’s also a new Platinum Collection pack that includes variants of the Spider, Cicada, JagerMech, King Crab, Incubus, Vapor Eagle, Hellfire, and Kodiak.

And that’s it for May! Join us in June when I’ll have become a year older and the rest of you will be the exact same age. Unless your birthday is also in June, in which case, happy birthday!

And as always, MechWarriors, Stay Syrupy.

4 thoughts on “Your BattleTech News Roundup For May, 2022”