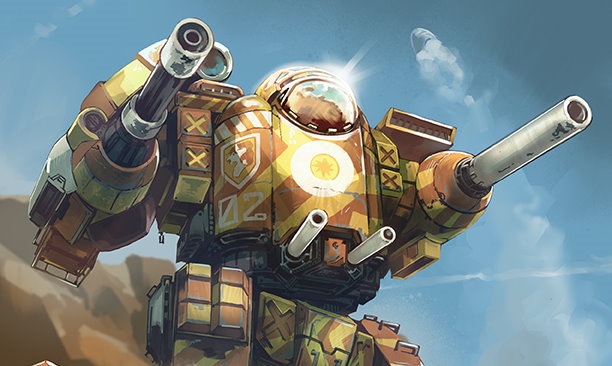 Welp. It’s September, and you know what that means.

Now that we’ve gotten that crucial meme out of the way, welcome to September. I’ve got more than enough existential dread to make writing this intro extremely difficult. So instead, I’m just going to rely on that cheap laugh and jump right into the news. Because nothing blows away anxiety over the potential fall of Western Civilization than a game universe about constant, unending warfare. And giant robots.

Hey, remember that Hired Steel poster we got last month? Well, TMC is back with a pilot episode for its brand new MechWarrior machinima.

This has a whole lot of potential. The animation is only two minutes long, but the quality is superb. They’ve even got a DropShip flight deck where people move around and stuff! MechWarrior 5 could take a lesson here. Hint hint.

Not a whole lot happens; a lance consisting of a Shadow Hawk, a Catapult, a Hunchback, and a Rifleman land on a nameless world before the screen lets us know that this story will continue later. What is this lance of medium and heavy ‘Mechs doing on this apparently verdant world? Find out next month, hopefully.

Also, TMC got George Ledoux to do the opening narration, and that’s just sweet of ‘em.

Last month’s preview has given way to the real thing. Lostech is here, and it’s a story about Virtual World and FASA’s BattleTech Centers, two places I’ve sadly never had the pleasure of attending because I live in Canada. But I have at least experienced a BattleTech simulator pod, so I know a bit of what I’m missing.

Lostech explores not just the construction and evolution of those simulator pods, but the business side of things as well. With BattleTech and FASA founders Ross Babcock and Jordan Weisman, Virtual World developers Greg Corson, Dave McCoy, JM Albertson, and Bill Redman, as well as Virtual World staff David Abzug, Jose Corpuz, and Paul Tierney, Lostech is a meandering romp down memory lane directed by Chris “Lynx” Chapman (whom you might know from a certain MechCommander game).

There’s a wealth of information here that I am almost certain to source when it comes time for me to revisit Virtual World and the BattleTech simulator pods. It’s also great to see where FASA and Virtual World fit into the wider arcade phenomenon back in the early ‘90s. Check it out when you get the chance! Just make sure you’ve got a spare two hours or so--this is definitely a dense documentary.

Tex Impresses Again With New Documentary On The Mackie

Battletech/Mechwarrior Lore : The Mackie, The Rise of the Battlemech
Watch this video on YouTube.

I’ve probably said enough kind words about Tex’s videos to fill an entire article on its own, but I’ll say ‘em again because the Black Pants Legion just keeps getting better and better. The latest video features the same wonderful writing and narration we’ve come to expect from Tex and company, but now goes one step further thanks to community support.

In the latest Tex Talks BattleTech, we have the wonderful voice stylings of BB Wolfe and George Ledoux, as well as all-new art from D.C. Bruins, Spacer, and Eldosiousrex, plus a ton of music from Goat, Kumakin, and Jekyll. The production value has really gone through the roof thanks to all these collaborations, and I can honestly say this is the best BattleTech content being made and distributed for free anywhere on the internet.

Plus, the full story of the Mackie is truly fascinating. Not just because it’s about the BattleTech universe’s first ‘Mech, but because it’s also about the story of how all of human conflict came to be dominated by giant stompy robots. With a clear sequence of events, Tex and the Black Pants Legion make a rational case for how all war went from space-based warship battles to ground-based robo-fights without making the whole thing sound hokey or downright stupid. That’s a talent I’m not sure I could replicate.

Anyway, go check out this video and subscribe if you haven’t already. You won’t regret it.

The Unofficial MechWarrior Online World Championships Are About To Start

Sadly, COVID-19 has rendered it impossible for PGI to host an actual live tournament, but that hasn’t stopped players from organizing an unofficial MechWarrior Online World Championships anyways with their support.

The competitive queue opens to all-comers on September 29 and closes on November 10. Matches are every Thursday and Saturday, with the top teams moving on to the finals starting on November 13. The grand finals will take place on December 12. 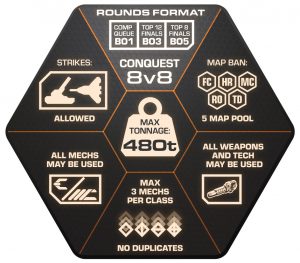 There will be both in-game and cash prizes, with the cash portion being crowdsourced over on Matcherino. PGI will supply the in-game rewards, which can be pretty substantial. First place gets a 3x Ultimate Pack consisting of 25,000 MC, 74 million C-bills, 2,500 GSP, and some titles. The top 500 players get a consolation prize of five ‘Mech Bays, 3 million C-bills, 373 GSP, and some free paint colors.

Rules are similar to previous years, with matches being fought with teams of 8 on Conquest mode. There are five maps to choose from along with a map ban phase, with air and artillery strikes allowed on both sides. Each team is limited to 480 tons, must have 3 ‘Mechs from each class, and all weapons, tech, and ‘Mechs are allowed, including Hero ‘Mechs.

Sign-ups are available via the Comp Play tab in-game, but also head on over to the MWO Comp Discord to verify your roster and ensure you’re signed up for the many rewards this tournament has to offer. The fine folks over there would also be happy to answer any questions you may have. You can read the full rules here.

I’m currently maining a Quickdraw in my MechWarrior 5 playthrough, so these images couldn’t have better timing.

Finished the Lineart for my Quickdraw redesign! What do you guys think of it, overall? from battletech

First, we have this one from RedCometComith. This is technically a redesign, but I can see a lot of MechWarrior Online/MW5 influence in the arms and chest. I think I like this one a little more though. MechWarrior 5‘s Quickdraw is sort of squat while this one stands a bit taller and retains some iconic features from the tabletop like those rounded ankle actuators.

And then we have judosavarnas with a 3D model released on the exact same day. This one is far more traditional but no less amazing. They’re both great, and they’re both fueling my love of the Quickdraw as my current favorite ‘Mech. But to be fair, my favorite ‘Mech changes more often than the seasons, so next month it’ll probably be a Doloire or something. 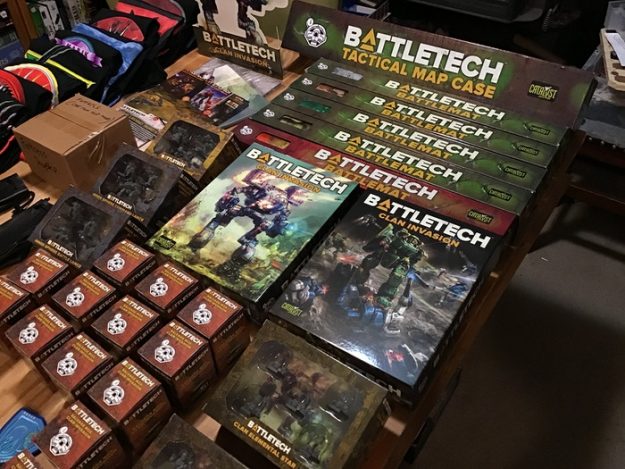 Catalyst gave us an update earlier in the month to let us know how things are going with the Clan Invasion. The big takeaway was this: “All hubs are expected to ship to backers in the early weeks of October.” So people should start to get their first wave orders sometime in October, provided of course that the USPS hasn’t been completely dismantled by then. 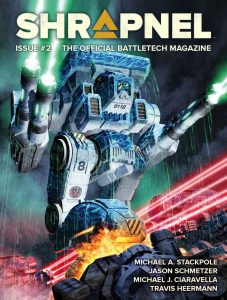 In the meantime, we’ve got yet more photos, yet more 3D renders of second-wave ‘Mechs, and other merch that will get shipped with the first wave. My only problem is that there’s absolutely nothing here about the UrbanMech plushie, and I’m starting to get desperate. Who do I gotta suck up to in order to spend every waking moment with a soft UrbanMech toy surgically grafted to my ass?

In other Catalyst news, the second issue of Shrapnel magazine is out now with new fiction from Michael J. Ciaravella, Jason Schmetzer, and Michael A. Stackpole, as well as “a technical readout of an unusual 55-ton Centurion variant.” There’s lots more, of course, so go order your copy and subscribe for future issues.

Oh, and there’s a new book coming out on Friday: Icons of War by Craig A. Reed Jr. This one takes us back to the home Clans to see what they’ve been up to leading into the invasion of Terra. And in typical Clan fashion, they’re all trying to kill each other. At least, I assume.

Wolves Is Gearing Up For A Big Update, So Here’s A Few Teasers

Along with brand new mechs, Wave 2 will of course launch with a shiny set of new skins. Some are completely original while some take inspiration from all corners of our favorite franchise and maybe even beyond… WIP. pic.twitter.com/elvtM1gxLq

I’ve been keeping tabs on Wolves, the free-to-play fan-made MechAssault game, and it looks like there’s going to be a new update soon. There will be new ‘Mechs, new skins, a brand new HUD, and some visual effects, according to the game’s Twitter page.

One of those ‘Mechs is definitely a Hellbringer, a ‘Mech so cool that it’s mentioned with both its Inner Sphere and Clan name on our page for MechAssault 2: Lone Wolf.

I might be wrong since you can only see the ‘Mech from behind and it (of course) bears a strong resemblance to the Summoner. I’m sure Pajama Boy will correct me if I’m wrong.

Anyone Up For A ProtoMech Webcomic?

Geergutz over on Reddit recently posted this, and I felt like it was something worth sharing. They plan to start a BattleTech-inspired webcomic about ProtoMechs, of all things. These much-maligned overgrown battlesuits aren’t really something that gets a lot of attention these days, even in the post-Dark Age era where everyone and their pet dog have a set of power armor in their closet.

The cover we see here apparently features a Hell’s Horses pilot and a Centaur ProtoMech. That’s about all we got so far, but you can check out geergutz’s DeviantArt page to see more, along with this neat comparison image of several ‘Mechs, ProtoMechs, and Elemental armor.

No, this is not a joke. I like MechWarrior 5 as much as the next guy, but a masterpiece of narrative storytelling it is not. And yet, somehow, MechWarrior 5 won the award for Best Narrative at the Canadian Game Awards.

This is what happens when we don’t get a new BioWare game every year.

Also, I LIVE in Canada and I’m only hearing about the Canadian Game Awards just now. The selection committee is a bunch of people I’ve never heard of, except for Marc Salzman and that’s only because he’s at the beginning of every in-theatre movie to hawk overpriced tech at me during the pre-show.

And that’s it for this month! Join us next month where we’ll all hopefully have our Clan Invasion Kickstarter minis and maybe the world won’t be quite so on fire.

6 thoughts on “Your BattleTech News Roundup For September 2020”