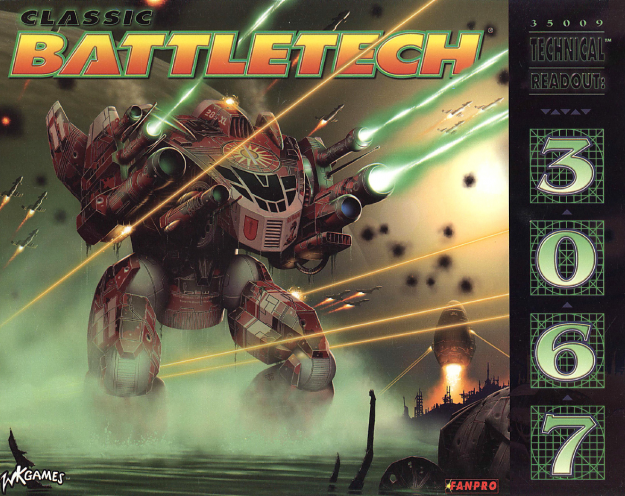 All Along the Civil War

The Civil War between siblings is over.  Much of the Inner Sphere rests in a very tentative, damaged, and brutally won peace.  And it stands on the threshold of oblivion.  War-torn and battle-weary.

Hey look, we all care about tanks and aircraft, infantry both powered and conventional, and more.  But at the end of the day I don’t keep coming back to this game year after year after year for the small stuff.  I’m here to smash BattleMechs together!

The Technical Readout: 3067 brings a lot of powerful, useful, and experimental stuff to the forefront. And most of all, there’s another dosage of BattleMech smashing happening!  Now I was late to the part for TRO: 3067.  While I grabbed copies of 3055, 3058 and 3060 as soon as they were printed, I was on a hiatus for a few years.  So when I came back to BattleTech I also grabbed 3067 to check things out.  And then I got to playing with them!

So today I want to look at four of my favorite BattleMechs from the IS side of Technical Readout: 3067, and then ask you what yours are.  What sticks out to you? What’s not to love?

Akuma – Seriously, what’s not to love about this thing?  It has an epic amount of armor for protection.  Forget all of those fancy XL engine problems.  It has enough heat and speed for an assault ‘Mech.  It has some serious weapon-age, including the ER PPC, LB 10-X AC, and an MRM 30, along with the medium pulse, SRM6 Streak, and medium laser.  That’s a lot of weapons at all sorts of ranges.  Oh, and it looks fierce as well.  There is no part of the Akuma that sucks.  I don’t apologize for any part of it.  Grab and make it the fulcrum of your attack, and use it to move others around, while driving.  It’s reliable, long-lasting, and extremely flexible.  Akuma on. No-Dachi – I don’t know that I’ve ever been much of a fan of XL engines in units that are designed to close.  Its one thing in a long-range unit designed to rain fire from far away, and you can even justify it on a super fast scout unit that’s supposed to dart about so quickly that you can’t hit it.  But I’ve never been a fan of it on close up smashers who, by definition, are wading into battle at close range.  I’ve also never been a fan of anything other than maximum armor on such a thing either.  So I don’t know why the No-Dachi works for me.  But it does.  It hums when I play it.  All of the weaknesses just ebb away and I’m left with a unit with the low heat sinks, that ER PPC, 2x MRM 20s, various SRMs and a medium laser all firing off to get you just overheat enough to trigger that Triple Strength Fun Time.  And then your Myomer-infused Sword, and the various short range weapons you rock, all will join forces to eviscerate foes.  It just works.

Don’t forget your Beagle at the door!

Bloodhound – As a specialized unit, with a specific role of hunting down units that are hidden and stealthy, this has a strong role to play on the modern battlefield.  Lots of units are getting a bit overly electronic in nature, and I’ve found that in the 3067 world, the Beagle Active Probe and the Guardian ECM are considerably more valuable than before.  We have loads of stealth armor, C3 and C3is, hidden units and more.  So the Bloodhound has a valuable role.  And it’s not a bad design either in that role.  7/11 speed is no joke.  14/28 heat dispersal is more than suited for the payload of a trio of ER Medium Lasers, an ER Small, and that SRM-6 Streak.  That’s a good punch.  And the 45 ton ‘Mech gives you a solid 9.5 tons devoted to armor, so you have no worries there.  That’s a solid unit, with a solid purpose, designed well. Razorback – I feel like the Razorback plays like a fast Panther.  Light ‘Mech?  Check.  Long Range Energy Weapon?  Check.  Short-Range Missile Rack?  Check.  High Armor?  Check.  But where the Razorback is a little under the Panther in quality of those weapons (ER Large Laser vs ER PCC and SRM-4 Streak vs SRM-6) you get a quartet of machine guns for devastating close-range and anti-infantry fire.  And don’t forget that the light engine allows you to scoot with that 6/9 speed, perfectly suitable for a 30 tonner.  It’s like they improved on virtually everything that makes the Panther good!  Yay Razorback!

Anyways, those are some of my favorite Inner Sphere BattleMechs from 3067.  So what do you like?  What strikes your fancy?   What is your go to unit of choice?

7 thoughts on “Your Favorite IS BattleMechs from 3067”