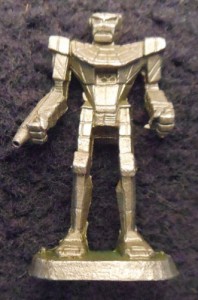 I don’t know why I bought that Panther.  Maybe it was because none of my friends owned a Panther miniature.  No matter how badly I painted it, they’d still have to use it when we played.  Or maybe I just wanted my first paint job to be a smaller miniature, so it would be less imposing.  For whatever reason, I purchased that Ral Partha miniature, and then proceeded home to paint my first…well…anything really.

I had been playing BattleTech for about three months by that point. Ninth grade was almost over.  Everyone else in my playgroup had a bunch of miniatures they had picked up and painted.  It was time I do the same!  So I bought that Panther and set out to make the best looking Panther I could.

But I’ve never been an artist.  Usually I don’t enjoy crafts such as painting.  I grabbed my mother’s set of craft paint and began a project that took all night.  For five minutes I stared at the metal frame.  What did I want this thing to look like?  After consideration, I gave it a boring brown body, but I didn’t like that very much.  I used Steel for the PPC and Crimson for its eyes.  A touch here and there.  Before too long, it had become the Panther of 14 Colors.  I had even found a place for Lilac.  I sighed.  I had inadvertently painted the Rainbow Kitty.

For a few weeks, I brought it to game time.  No one used it.  Discouraged, I picked up a Stinger and Wasp and painted them dark grey, with just black and silver sections. I made them simple on purpose.  They weren’t elegant, but they did the job well enough.  And people played with them!

Eventually, I decided to reboot the Panther.  I took a bath with it, and washed it off.  This would be a new chance!  Forest Green was the body, and then some lighter greens, black, brown, and steel.  It was Forest Camo Kitty.  And yet, it still didn’t look right.  I think it was used once or twice in the next year.

One more time! I stripped off the camo design and painted the Panther medium gray.  It took about ten minutes before I realized that was a bad choice too, but I had already begun.  It was yet another sad attempt to make the Panther sleek and powerful – like its namesake.

Unfortunately, a few years ago, I lost my Panther and a few other miniatures.  I no longer own my first miniature experience.  Today, after painting about 250 miniatures in fantasy and BattleTech,  I can honestly say that on a scale of 1 to 10, with a 1 being my first Panther and a 10 being the amazing work I see online, I’m about at a 3.  It’s not my thing. But that’s alright.  It suffices.

The Panther stays with me always though.  You always remember that first miniature.

What was your first miniature?  How did it turn out?  Do you have any pictures?

3 thoughts on “Your First Miniature”