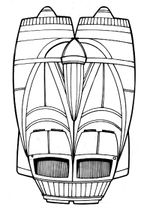 The Jump Pack was a one-shot jump jets alternative. Introduced near 3053 design of Dr. Priar as a way to give ground-bound 'Mechs an option to perform surprise attacks catching enemy units off-guard. The Jump Pack however cut the host 'Mech's maximum speed by half due to its bulk on the 'Mech's body and legs.[1]

BattleMech Jump Packs allow 'Mechs to perform a single jump equaling 9 for 40 ton 'Mechs and lighter, or 9 minus 1 per each 10 tons for more heavy 'Mechs, with weight rounded down (For 50 ton - jump 8, e.t.c ). Heat is generated as for use of regular jump jets. 'Mech speed base is reduced by half through whole game till the jump, when the Jump Pack is ejected automatically.[1]