The Third Jaguar Cavaliers were a unit of Clan Smoke Jaguar's Delta Galaxy. They were also responsible for some of the most disturbing combat during the invasion.[1]

The Third Cavaliers bid for and fought on the following worlds during Operation REVIVAL, the invasion of the Inner Sphere:

Idlewind
Star Colonel Paul Moon led Trinary Assault on to Idlewind in March 3050. When he discovered that the Idlewind Stormtroopers consisted only of a heavy tank battalion backed by a regiment of mechanized infantry he allowed his warriors to bid to lead the attack. The successful Star Commander Joal issued his batchall and led two points of Trinary Assault's Elementals into the agreed battlefield of Breezemont Woods No sooner had they steped from their carriers when they were caught in a napalm trap. Joal led the entire Trinary to find the dishonorable surats that set the trap. The Stormtroopers had retreated to the capital city. During the search of the city many of the civilians took up arms against the invaders. The Trinary hunted down all armed insurgents killing half the civilian population in three hours. This action forced Lincoln Osis to defend his troops actions before the Grand Council.[2]

Jeronimo
The Cavaliers found the Fifth Galedon Regulars defending hardened bunkers set in the Topside Woods when they attacked Jeronimo in September 3050. Trinary Assault and Binary Elemental had made no progress after several hours of fighting, forcing Star Colonel Moon to call on reinforcements from the Second Battle Trinary, these broke the Regular's lines and forced them to withdraw.[3][1]

Marshdale
The Sixth Ghost Regiment had been on Marshdale for over a year preparing defenses before the Cavaliers attacked in November 3051. The Sixth Ghost led the Jaguars on wild chase across a trap filled continent, tiring of this Paul Moon ordered the capital city of Drenden attacked to draw the defenders out. This plan worked and the Sixth Ghost took a open position in Asquare Field, that they had previously spread minefields. Learning from his experience Moon sent his technicians ahead of his warriors to clear a path allowing the Cavaliers to move freely and cut down the Ghost 'Mechs. The Sixth attempted to withdraw but were overrun at Thoughnet and defeated.[4]

Luthien
Actual battle records of the Third Cavaliers are sparse for the fighting on Luthien in January 3052. It is mentioned that they marshaled for the battle and failed to stem the tide of defeat, possibly indicating a secondary or rearguard role.[1]

Tanh Linh
On the 4th June 3052, only two weeks after the Battle of Tukayyid the Jaguars unleashed Delta Galaxy in what appeared to be a scaled down sixth wave. The targets were Tanh Linh, Baruun Urt, and McAlister.[5] Star Captain Oleg Nevversan led the Third on Tanh Linh, here the defenders used hit and run tactics and night time attacks to keep the Cavaliers at bay. After a week the Third caught the Forty-second Dieron Regulars against the ridge of mountains and destroyed two battalions, and only a rear attack by the arriving Second An Ting Legion forced the Jaguars off-planet in a Pyrrhic victory that totally destroyed the Dieron Regulars.[6]

They rebuilt after the Truce of Tukayyid on Hyner with warriors transferred in from shattered clusters; including Star Captain Trent and other warriors from Beta Galaxy.[7] In the summer and autumn of 3054 the Cavaliers undertook a a lengthy training series of field maneuvers and also received fresh BattleMechs and warriors.[8]

During the years 3054 and 3055 they fought the Kat Killer Five, a group of guerrilla fighters originally from the Second Arkab Legion on Hyner.[9] In November 3054 Trinary Strike was lured into an ambush at the mine workings of Baker Canyon.[10] Learning that the local population was harboring the guerillas Paul Moon ordered Star Captain Jez Howell to attack the village of Beaver Falls in December 3054, destroying all buildings and wiping out its inhabitants.[11] The Kat Killer Five then started a campaign of bombing and had to be lured out of hiding in January 3055 when the last of the gang were killed. As a further reprisal Moon order the village of Chinn wiped from the map as well.[12] The vicious behavior of Star Colonel Paul Moon led Trent to believe that Clan Smoke Jaguar had abandoned the high ideals of the Clans. In April 3055 a company of 'Mechs dropped on to the planet, it was assumed their mission was to reinforce and resupply the Kat Killer Five. Elements of Trinary Strike met them in the swamplands west of Warrenton eliminating the raiders. The encounter also saw Trent murder his commanding officer and rival Jez Howell.[13]

In April 3058 Paul Moon outbid Star Colonel Thilla Showers of the Nineteenth Striker Cluster to launch a raid against Maldonado. Trent's Trinary was bid in the force and he intended to use this opportunity to defect to ComStar. After the raiding party had left Galaxy Commander Hang Mehta contacted Paul Moon and revealed the scale of Trent's treachery, ordering Moon to capture or kill the renegade.[14] On 24th May Trinary Assault, Supernova Striker and Beta Striker Trinary dropped in to the Shenandoah River Valley on Maldonado and moved against the Twelfth Dieron Regulars. Beta Striker Trinary led the attack as the other two Trinaries attempted to ford the river. As the fighting raged Paul Moon arrived to apprehend Trent sending his Star of Elementals to kill him, Trent incapacitated Paul Moon with a shot severing a leg. Before Trent himself could be taken down a force from the ComGuard 308th Division attacked to rescue him.[15] 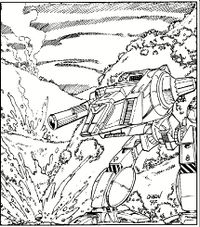 Shadow Cat from the 3rd Cavaliers on Hyner in 3059

Hyner
As part of the clandestine campaign Operation Bird Dog the Dark Sword, a company sized unit from the Ryuken-yon, dropped onto the planet Hyner in May 3059. Rubinsky's Renegades Demi-Company also took part in this attack.[16] The Third attempted to hunt them down, but were still dealing with this threat when the main assault hit the planet. [17]

Hyner
The planet was subsequently attacked by the DCMS's Second Sword of Light, FWLM's First Regulan Hussars and the ComGuard Ninth and 208th Divisions. Unprepared and still without Star Colonel Paul Moon, the Third paraded out on the attack. By the time they started defensive operations they had lost too many warrior to be able to hold the planet and were subsequently destroyed after three day fighting.[18][19] The fighting was not totally one sided, during the Battle of Kelian Wolds Tai-i Hirotsu committed three Lances against two Stars from the Second Battle Trinary. In a series of duels the Jaguars destroyed the Combine unit, Hirotsu was forced to call in reinforcement but was killed before they arrived.[20] Star Colonel Paul Moon was still severely wounded and in hospital at the time, he was extracted against his will by medical personnel.[21][22]

Paul Moon commanded Alpha Provisional Cluster on Huntress.[23][24] Other members of the Third Cavaliers may also have formed this unit.

The Cavaliers were known for their aggressive tactics and disregard for collateral damage and civilian casualties.

If a force starts a mission without both 'Mechs and Elementals it suffers a -2 Initiative penalty.

All Cavalier 'Mechs count as OmniMechs for Elemental transport purposes.

If a unit deliberately attacks a structure, the structure takes one extra damage for every five inflicted. [36]

In the novel Exodus Road, conventional infantry is also mentioned, but they were probably security personnel of the scientist caste.