The Sixth Jaguar Dragoons were a Cluster of Clan Smoke Jaguar's Alpha Galaxy. They were taken as isorla by Clan Wolf-in-Exile during Operation BULLDOG and renamed the Sixth Wolf Guards. 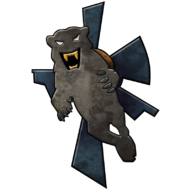 The Sixth Jaguar Dragoons were nicknamed the "Wolf Slayers" because they were the unit whose successful Trial of Possession brought the Dire Wolf Assault OmniMech into the Smoke Jaguar touman, despite having killed no Wolves in that trial. As a reward for this, the Sixth were second only to the illustrious 362nd Assault Cluster in the number of Dire Wolf Omnis in its ranks.[1]

During the Trials that led up to Operation REVIVAL, the Sixth acted as the Smoke Jaguar's force. They faced and defeated the forces of Clan Nova Cat, Clan Coyote, and Clan Ghost Bear, losing only narrowly to Clan Jade Falcon's Third Talon in the last round.[2]

As part of Alpha Galaxy the Sixth Jaguar Dragoons successfully bid for and fought on the following worlds during the invasion of the Inner Sphere:

Tarnby
Trinaries Assault and Battle were bid in the attack on Tarnby in March 3050. In the opening predawn attack Trinary assault slammed into the lines of the defending Fourth Pesht Regulars at Divers Grotto. The Regulars attempted to take the Sixth's 'Mechs on in one-on-one duels and were totally outclassed. The arrival of Elementals from Trinary Battle caused the Regulars to panic and run and Star Captain Bowen exploited this retreat to crush the defenders' left flank and claim victory.[3]

Byesville
In October 3050 Binary Elemental dropped on to Byesville. The defending Militia consisted of two infantry battalions and a single armored regiment. The Elemental attacked the battalions' headquarters at Rydersin, Killogny and Peel in coordinated night time attacks. The Militia surrendered the next day to Lincoln Osis.[4]

Yamarovka
Trinary Striker and Binary Elemental were bid for the assault on Yamarovka in February 3052. Striker Trinary landed first at Lasden Bluffs and immediately assaulted the two defending 'Mech companies of the Legion of Yamarovka destroying them completely before Binary Elemental had landed.[5]

During the Battle of Tukayyid, the 6th Dragoons were led by now Khan Osis, who also served as overall commander for the attack of Alpha Galaxy against the primary target city of Dinju Heights. Defended by the Com Guards veteran ranked Fifth Army, the assault on Dinju Heights started well for the Jaguars, with the 6th Dragoons -- assigned to perform an orbital drop to secure Alpha Galaxy's drop site -- falling right on top of the green 50th Division, and wiping them out in the confusion. [6] [7] [8] [9] [10]

The first warrior of the Clans to land on Tukayyid was a Smoke Jaguar Elemental of the 6th Dragoons named Bolin. He was so eager to place the first shot in the battle that he held off firing his jump jets until the last moments before landing, which turned out to be far too late, resulting in crippling injuries that ended his career even though he was indeed able to fire the first shot. [11]

While the rest of Alpha assumed it was their superiority over the ComStar forces allowing them to effortlessly roll over the Com Guard defensive lines, Star Colonel Brandon Howell correctly suspected a trap in the seemingly undefended Dinju Pass, ordering his Jaguar Grenadiers to advance at maximum speed, preventing the hidden 299th and 323rd Divisions from catching the entire cluster and reaching the other side of the pass. [12] [6] [7] [8] [9] [10]

Unwilling to be outdone by a subordinate, Khan Osis ordered the Sixth Dragoons to make their own run, by which time the 299th and 323rd Divisions had fully emerged from hiding. With the Com Guard divisions now crowding the floor of the pass and creating a gauntlet of overwhelming firepower, the Sixth suffered horrendous losses. Worse was to come when a Com Guard MechWarrior succeeded in defeating Loremaster Edmund Hoyt and seemingly killing Khan Osis, the Sixth's CO in truth being incapacitated and pinned beneath Hoyt's shattered Summoner. [13] [1] [12] [6] [7] [8] [9] [10]

With Khan Osis's apparent demise followed shortly after by the death of saKhan Sarah Weaver during Beta Galaxy's push to the secondary target city of Port Racice, ilKhan Ulric Kerensky was forced to terminate the Jaguar campaign. While the demoralized Beta Galaxy dutifully obeyed, those in Alpha Galaxy were enraged by what they felt was a Wolf Clan snub to their sacrifices and vowed to fight on to the death. With the Grenadiers unable to break through the 299th and 323rd's battle line to save them, the outnumbered Sixth Dragoons were effectively destroyed. Ultimately only eight warriors from the Sixth Jaguar Dragoons survived the fighting in Dinju Pass. [12] [6] [7] [8] [9] [10]

Lincoln Osis sought to rebuild his former unit and turned it into the Clan Smoke Jaguars' prestige-unit. Osis’ backed Brendon Corbett in his Trial of Position for the position of Star Colonel in the reforming 6th Jaguar Dragoons. [14] The 168th Garrison Cluster was traditionally assigned as an aid-unit for the Sixth Dragoons.[15]

Immediately prior to Operation BULLDOG, the Sixth Jaguar Dragoons were stationed on Labrea preparing for a campaign against the Draconis Combine, awaiting word that Khan Lincoln Osis would soon declare a new invasion of the Inner Sphere. Upon learning of Bulldog's first wave, the Sixth's CO Logan Moon sent a request to Khan Osis for both reinforcements and permission to wage a defensive campaign while awaiting them, Lincoln Osis refused to allow his prestige unit to engage in such Spheroid combat lest it damage his image.[16]

Thus when Exiled Wolves 4th Wolf Guards, 1st Wolf Legion and 1st Wolf Strike Grenadiers landed, Moon openly led the Sixth Dragoons out to meet them. Having assumed the Jaguars would engage in a more brutal and defensive campaign, Khan Phelan Kell declared a formal Trial of Possession in the zellbrigen style for the 6th Jaguar Dragoons as a means of allowing Moon to save their honor rather than foolishly sacrifice their lives for Khan Osis's benefit.[16]

In a simple three-on-three Trial in Colodney Valley, Phelan Kell pushed his Executioner A's heat limit early to quickly damage Moon's heavier Dire Wolf A before relying on distance and maneuvering to defeat him. [17] Ranna Kerensky however relied on superior targeting in her Warhawk C to defeat Wimmer's Turkina B at range, while Ragnar favored the reverse, immediately closing his Ice Ferret D with Showers' longer ranged Shadow Cat A where he had the advantage.[16]

Assigned to Clan Wolf-in-Exile's Alpha Galaxy as the Sixth Wolf Guards, while loyal to their new Clan, many observers questioned if the elite but Crusader Smoke Jaguars who made upon virtually the entire cluster would really give their all in the defense of Warden polices. [19] As of the 6th was stationed on their Clan's nominal homeworld of Arc-Royal. [20]

Compared to the other clusters of Alpha Galaxy, the Sixth had a relatively quiet start to the Word of Blake Jihad guarding the Lyran Alliance against Clan Jade Falcon, until the entire galaxy was activated in 3077 to join the Federated Suns front of Operation SCOUR and assaulted Yangtze, Achernar, Azha, Small World, and Sheratan. The Sixth then took part in the assault of the Terran system in 3078, joining the rest of Alpha and their Clan Nova Cat counterpart in capturing ROM's Koryo Castle Brian on Mars.[21] [22] [23]

Taking up station on Dustball as they tried to recoup the losses suffered during Operation SCOUR, as of 3079 the Sixth were at 55% strength. [21] As 3085 the Sixth had only recovered to 60% strength, featuring non-OmniMechs in their line for the first time, [24] but like the rest of Alpha also receiving some of Clan Wolf-in-Exile's new Arctic Wolf II OmniMech. [25]

At some point between the Jihad and 3145, the unit would be removed from the Wolf-in-Exile roster. The unit's fate is yet unclear. [26]

The Sixth Jaguar Dragoons were experts in first picking apart their opponents at long range and then rushing in for close assaults to finish off their foes.[1]