The 9th Lyran Regulars, known as the "Karilon Magicians" [1] was a BattleMech regiment in service to House Steiner.

The insignia of the Rim Worlds Republic

The 9th Lyran Regulars were formed during the First Succession War by the Lyran Commonwealth Armed Forces. It was originally composed of former Rim Worlds Republic warriors who had sided against Stefan Amaris during the Amaris Coup, when the Usurper assassinated First Lord Richard Cameron and seized control of the Star League. Gathering on the planet Karilon, they were soon attacked by a division of the Amaris Dragoons, resulting in the deaths of most of the brotherhood. Those who survived joined with General Aleksandr Kerensky against the Amaris Empire during the drive towards Terra. When Kerensky and the Star League Defense Force departed on the Exodus, they decided to enter the service of the Lyran Commonwealth rather than follow General Kerensky into the Periphery.[2]

With their vast experience, the 9th were very successful during the early Succession Wars, achieving many victories. Attrition and turnover, however, eventually reduced their collective ability, and they were considered a regular unit during the Second Succession War. They spent most of their existence on the Free Worlds League border.[2]

During the Marik Civil War in 3014, the 9th were sent to attack the planet Uhuru alongside the mercenary Narhal's Raiders, where they engaged the 31st Marik Militia. It was part of a plan by the Lyran Commonwealth Armed Forces to take advantage of Anton Marik's revolt, and by tying up the 31st Militia, the 9th allowed smaller Lyran raids to proceed at will. The 3rd and 5th Oriente Hussars reinforced the 31st Militia before matters could come to a conclusion, and the Lyran forces withdrew. [3]

As of 3025, the 9th was based on Cavanaugh II. By this point, their quality rating had fallen to green. [4] They would remain there throughout the Fourth Succession War, waiting for an attack by the Free Worlds League Military that never came.[5]

Andurien Secession and War of 3039[edit]

During the Andurien Secession, the 9th launched an apparently unauthorized attack on Marik industrial centers nearest the Terran Corridor in mid-3038, most notably on Irian in a raid that was reportedly unsuccessful. The 9th spent the War of 3039 back on their homeworld of Cavanaugh II, seeing no combat. In the aftermath of that conflict the 9th was assigned to garrison Main Street in the newly-formed Periphery March, following the reorganization of the Armed Forces of the Federated Commonwealth. There they were confined primarily to pirate hunting activities and providing escort. [6] [7][2]

The 9th saw no action during the Clan Invasion, remaining on Main Street, far from the front lines.[8][9]

During the Clan Jade Falcon incursion of 3058, the 9th was called up to reinforce the 22nd Skye Rangers on Engadine, only to discover the raiders had already defeated the Rangers and moved on to Coventry by the time the 9th arrived.[2]

In 3062, the 9th were back on Main Street, which was now part of the Melissia Theater of operations. By this time, the unit's quality rating had finally returned to regular.[10] They had stepped up their pirate hunting operations, and were pursuing one group that was apparently searching for a Star League-era cache.[2]

When the FedCom Civil War finally broke out in 3063, the 9th were deployed to Inarcs, held by elements of the elite 7th Crucis Lancers. Though they boasted a large numerical advantage in 'Mechs, they faced a major disparity in ability and they were forced to leave one of their Aerospace wings on Main Street to protect commercial shipping interests. Problems erupted almost as soon as the 9th entered the system. The Lancers' 405th Federation Interceptor Wing destroyed a Union-class DropShip, destroying an entire company of 'Mechs in space and damaging several other DropShips. The 9th landed on Inarcs scattered and disorganized, and came under immediate fire from the Lancers' armor. The Regulars' commanding officer was killed by a freak shot to her cockpit, and all three battalions soon faced enemy fire. Under the belief the Department of Military Intelligence had been wrong and they were facing the entire RCT, the 9th Regulars' acting commander ordered a retreat, with his surviving force totaling little more than a reinforced battalion.[11] [12] The Regulars returned to Main Street. [12]

The 9th Regulars were called to action again during the Jade Falcon Incursion of 3064. Summoned to help defend the Theater capital of Melissia by General Sharon Bryan, the 9th Regulars found themselves assigned as part of a massed static defense by Bryan, over the objections of General Adam Steiner. The invading Jade Falcons, led by Khan Marthe Pryde, picked away at the defenders, drawing them out of their defensive positions while cycling her own troops to keep them fresh. After whittling the Lyran forces down, Khan Pryde delivered her Coup de grâce by dropping two of her clusters directly onto General Bryan's fortified base, killing her and throwing the defenders into complete disarray. Acting quickly, General Adam Steiner gathered all the survivors he could, including the 9th Regulars, and ordered a retreat, regrouping on Chapultepec.[13] The 9th managed to survive with only moderate losses.[14] 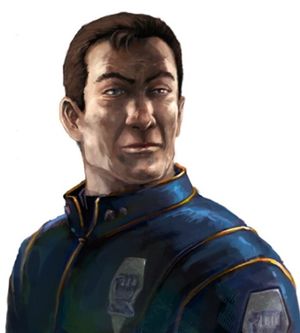 Adam Steiner, who commanded a taskforce that included the 9th Lyran Regulars

The 9th then joined General Steiner's taskforce as part of Operation Audacity, a bold counter-attack against the Jade Falcon Occupation Zone. Along with the 14th Donegal Guards and the reinforced 15th Arcturan Guards, the Regulars struck at Black Earth and were opposed by the 3rd Talon Cluster. Facing heavy Aerospace opposition and a bogged down campaign, General Steiner called upon the 1st Wolf Strike Grenadiers for reinforcements. The Lyrans and their Clan Wolf-in-Exile allies were soon victorious, and the Taskforce moved on. [16] Although overall losses to the 9th were moderate, [14] the fighting resulted in the death of another commanding officer. Command fell to then-Hauptmann Annabeth Patrick. [17]

The Taskforce then struck at Malibu, where they engaged the 8th Falcon Regulars in a zero-gravity fight on one of Malibu's moons for the right to the system's recharge station, as the civilian government wanted no part of the battle. The Falcons surrendered after a few hours of fighting. [15] The 9th took moderate losses.[14]

On Hot Springs, General Steiner's forces faced the 5th Battle Cluster, which chose to run a hit-and-run campaign as opposed to a stand-up fight. After weeks of pursuing the Falcons in vain, Steiner pulled off the planet, leaving it to the Jade Falcons.[15] The 9th Regulars sustained moderate losses.[14]

Next, they attacked Blackjack, where they reinforced General Archer Christifori's taskforce, which was already on-planet fighting against the 8th and [[10th Provisional Garrison Cluster (Clan Jade Falcon)|10th Provisional Garrison Cluster]]s. After putting the Falcons on the defensive, Falcon SaKhan Samantha Clees arrived, ordering both Clusters off-planet and inviting both Inner Sphere Generals to parley with Khan Pryde on Blair Atholl. [18] Once again, damage to the 9th was moderate.[14]

With the Blair Atholl Accords, the Jade Falcon Incursion came to an end. The 9th Regulars returned to Chapultepec to serve as its permanent garrison.[14] They would see no further significant fighting through the end of the war.[12]

By late 3067, the 9th Lyran Regulars were still based on Chapultepec, under the command of newly promoted Leutenant-General Annabeth Patrick. They were at approximately 55 percent strength with nearly half of that considered upgraded with new technology.[19]

The 9th Lyran Regulars spent most of the Jihad fighting pirates and each other. Leutenant-General Patrick used many administrative tricks to hamstring the Regulars who were under the command of Hauptmann-Kommandant Floyd Wood in retaliation for his constant complaints to theater command about his superior officers.[20]

The 9th was stationed on Khon Kaen to repel any assault from the Circinus Federation. As that threat never materialized, the 9th was transferred to the Commonwealth's border with Clan Jade Falcon. At the same time the 9th took up their new garrison location on Santana[21], their attached AeroSpace forces were reassigned elsewhere. This cleared up most of the problems the unit had with internal cohesion.[22]

The 9th participated in multiple combats with Clan Wolf during Vedet Brewster's reign as Archon. They fought the Wolves several times during the lead up to the action on Tharkad, while simultaneously fighting off Free Worlds League Military forces. The unit was down to three BattleMech companies by the time of the Tharkad actions, so they didn't participate in the fighting on that world. Instead they focused on escorting civilians into the Buena Province and providing humanitarian relief to worlds attacked by the Wolf Clan.

After the fighting on Tharkad ended, the 9th regained some strength by absorbing the survivors of the 10th and 12th Lyran Regulars. The unit then transferred to the Commonwealth's border with Clan Jade Falcon, spending most of their time guarding Greenlaw and Vorzel.[23]

The 9th employs small-unit tactics to successfully defend against and hunt down pirates from the Periphery. They are also accustomed to fighting in zero-gravity conditions.[2]

Note: At this point in time the heavy-weight unit was stationed on Bobruisk. In 2821 the command was reduced to 52 percent of its strength and was deployed on Zdice. [25]

Note: At this point in time the heavy-weight unit was stationed on Zdice with an operational readiness of 92 percent. [26]

Note: At this point in time the assault-weight unit was stationed on Zdice with an operational readiness of 70 percent. [26]

Note: At this point in time the unit was stationed on Cavanaugh.

Note: At this point in time the command was stationed on Main Street. [28]

Note: At this point in time the command was stationed on Main Street. [29]

Note: At this point in time the command was stationed on Main Street. [30]