The Alliance Grand Surveys (also known as Grand Surveys) were star system surveys conducted by the Terran Alliance in the late 22nd and early 23rd centuries.

In the midst of the First Exodus in the 2140s, many systems farther than one hyperjump away from Earth were beginning to be colonized. In the tradition of the star system survey conducted by the TAS Pathfinder (in the opening years of the 22nd century), the Alliance Grand Surveys were missions conducted to record the extent of colonization. These missions catalogued a remarkable rate of expansion. More than 100 colonies had been founded within 40 light-years of Terra by the time of the first Grand Survey. This is quite remarkable considering TAS Pathfinder had only conducted the first manned faster-than-light test only 64 years earlier (in 2108), and New Earth had only been settled in 2116).

Some colonists speculated that the surveys were a thinly-veiled attempt to show Alliance authority and were not interested in population numbers at all. As if to back up that speculation, basic statistics were published but the actual population numbers were never revealed to the public.

It is extremely likely that these missions were under the control of the Terran Space Navy but that remains unconfirmed.

The tremendous rate of colonization led the Terran Alliance to look inward, questioning whether to spend its resources on colonizing (and governing) the stars or to stamp out poverty and hunger on the homeworld.[1] 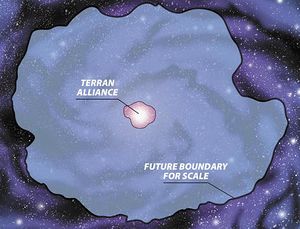 The Third Grand Survey of 2216 cataloged 461 colonized worlds in an one hundred light-year radius.[5]