Alpha Strike is a BattleTech game system/ruleset that allows faster gameplay than Total Warfare rules. Based on older BattleForce 2 and the Quick-Strike Rules and other rules found in the Strategic Operations, Alpha Strike is optimized to allow players to handle larger number of units, while simplifying handling of combat. 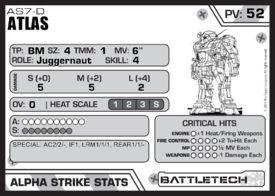