Alpin Wolf (3??? – 3054) was the son of MacKenzie Wolf and the grandson of Jaime Wolf, the commander of the legendary Wolf's Dragoons mercenary unit. 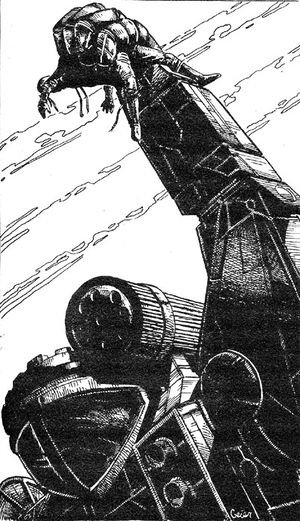 Though he was assigned as a MechWarrior to the Dragoons, Alpin's performance was substandard at best. The pressures of being Jaime Wolf's grandson proved to be more than he could bear. He fell under the influence of Elson Novacat, a Freeborn Clan Nova Cat Elemental taken as a Bondsman by the Dragoons during the Battle of Luthien. After the death of his father Mackenzie (a suspicious incident involving Periphery pirates) Elson convinced Alpin that he deserved to succeed his father as Jaime Wolf's second-in-command. When Jaime Wolf refused to do this, Elson successfully used Clan challenges to remove him from command.

The result was the Dragoon Civil War, where Alpin and Elson's supporters were opposed by elements of the Dragoons still loyal to Jaime Wolf. After several weeks of fighting, Alpin was killed in a duel with Maeve Wolf when he was provoked into single combat. Shortly thereafter, the conflict ended with Jaime Wolf returning to command.

As a result of the conflict, Jaime Wolf imposed new rules declaring that none of his descendants would inherit command.