The Anastaska Maro-class is an oceangoing naval support vessel designed for conveying traditional general bulk or non-liquid types of cargo across vast water worlds. The early twenty-seventh Century design was originally created by Lebedev Nautical Enterprises (LNE) on Tikonov in the Capellan Confederation. The ship shares design features with the Kaleen Bay-class Tanker. Both ships were noted for their shared basic and low-tech design traits which allowed them to be easily used and manufactured. Like its near sister ship, the Anastaska Maro was highly popular and was licensed to other manufactures to be built on large water worlds.[1][2]

Like many civilian industries, Lebedev Nautical Enterprises' production lines were destroyed during the Second Succession War. However the Anastaska Maro's design specs, along with Kaleen Bay, would continue to be duplicated throughout the Inner Sphere.[1][2]

Anastaska Maro is powered by a powerful natural gas-powered ICE power plant, which has been designed to allow the ship to move at a reasonable pace across the water, with a range of eight thousand kilometers. The design's hull is protected by forty-one tons of BAR-6 grade armor, giving it some resilience against damage from natural and man-made hazards.[1][2]

For its main task of moving various forms of general dry cargo, the design features a Roll on/Roll off style configuration. This layout features a series of ramps which allows for external loading and unloading of bulk goods, along with interlocking doors between various cargo bays. These features allows the crew and cargo handlers to move cargo and vehicles throughout the ship and when it lands at port. The ship also features four large Heavy type vehicle bays.[1][2]

The Anastaska Maro has twelve Searchlights in pairs on all of its hex facings except for its bow. The ship has a four-person 1st-class and a forty-person second-class sleeping area. It also has MASH equipment, four Lift Hoists in its front right and left sides, and twenty maritime lifeboats.[1][2] 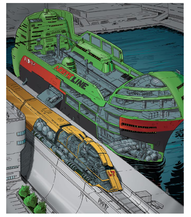 As of this writing, there are no published record sheets currently available for the Anataska Maro and its variants.

Please note that much of the Anastaska Maro's basic stats are shared with the Kaleen Bay. However, these ships are different designs and as not noted as variants of each other.