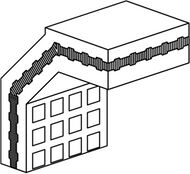 A unit's Barrier Armor Rating (or BAR) is a statistic used to indicate how hardy a unit is on the battlefield. Armor types used on Combat units like BattleMechs, tanks, and AeroSpace Fighters are automatically assumed to have a BAR of 10 because they have been constructed specifically for combat. Support units and civilian vehicles pressed into military service however, are typically not as well armored as their combat-oriented counterparts. The "armor" used by civilian and support vehicles is designed to protect them from everyday wear and tear rather than incoming missiles. The BAR provides a means to reflect the increased fragility of noncombat units in a combat area.

Basically any unit that is not built on an Armored Chassis with BAR 10 armor hit by a weapon that inflicts more damage than its BAR will need to check for a critical hit, even if the weapon did not damage internal structure.[1] So a Silverfin coastal cutter (BAR 7) hit by a PPC blast will have to check to see if it sustains a critical hit as the artificial lightning leaks through a small gap in the armor plating.

IndustrialMech armor was introduced in 2439 by the Terran Hegemony.[2] Like their military cousins, IndustrialMechs mount armor in sheets weighing a full ton or half ton. Unlike BattleMechs, IndustrialMechs are not usually designed for combat, and may have been built with armor that has a Barrier Armor Rating of less than 10. IndustrialMechs can only mount a few armor types, none of them advanced.[3]

Due to the wide variety of vehicle chassis, armor types, and industrial capacity, support vehicles have a variable BAR that depends on the designer's choices.[4]

Standard infantry armor types are graded using the BAR system, with four different categories of protection, though a fifth applies in specific cases. There are a wide variety of different armor types that an individual may wear, even clothing can be considered (nearly useless) armor.

When looking at the BAR for each piece of kit, they are shown numerically as:

A higher number means higher resistance against that type of weaponry. Infantry armor rarely can completely protect the user, even if the BAR rating significantly outclasses the AP factor of the weapon being fired at it. All infantry will take at least some damage as a result of being hit.[5] For each "point" a weapon's BAR penetrating factor is below the BAR of the armor, the effective "body damage" (and final armor penetrating value) is reduced by the difference.

Melee BAR is applicable to most types of handheld melee weapons, such as knives, axes, katanas and other "stabby, slashy things" including the Vibroblade and its variants, as well as blunt objects, like clubs that would usually be applied against the user in a hand to hand fight. Most armor types are not designed for this type of combat, and as a result, most armor has a melee BAR below other ratings. The only notable exception to this being actual (usually replica, though modern variants are still made) suits of armor.

The ballistic BAR is for resisting "slug throwers" such as the common Auto-Rifle. In most cases, ballistic protection is mutually incompatible with energy protection, with certain, expensive, and usually heavy exceptions. In general ballistic armor is heavier than energy resistant armor, but it's generally cheap to procure, and is relatively common everywhere, including the Periphery.

Explosion protection. With certain rare exceptions, most armor types fare poorly against explosive shock, for the user. In general, armor types with better ballistic resistance fare better against explosions. The only notable exception to this rule, being the Riot Shield and its heavier equivalents.

Most types of armor won't have a field for this explicitly stated. Instead, there are specific special use cases for when something needs to be checked against special BAR. These specific cases vary, from resistance to a flashbang, or determining whether or not an Hostile Environment Suit is enough to handle the environment the operator is in. Most articles of armor have a set type of BAR for special cases as separate notes.

This chart is intended to show common cover types an individual may find in a combat situation, whether they be an innocent bystander or a combatant. Cover can reduce the final impact of weapon fire that does penetrate it. This also may apply to certain Support Vehicle components.