The BattleMech HarJel System is an armor enhancement for BattleMechs. 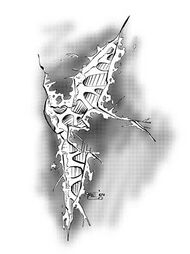 The Diamond Sharks introduced this system in 3059, but by 3067 the Lyran Alliance had reverse engineered the system.[1] The BattleMech HarJel System is an experimental piece of equipment that closes gaps in the armor of a BattleMech. This allows a 'Mech equipped with such a system (like the Aquagladius) to operate underwater without fearing a hull breach, as long as armor is still present. (Once all armor is gone from a location, it's automatically breached.) The system's main drawbacks are its bulk and its behavior when hit by weapons fire. The bulk issue results from the need to have a HarJel system in every location that needs to be protected. If a HarJel system is destroyed by weapons fire all HarJel stored in that location will expand automatically, flooding the components and weapons with sealant and rendering them useless. Removing the hardened sealant effectively doubles repair time. Ammunition stored in a HarJel-encased location cannot be dumped.[1]

BattleMech HarJel Systems can also be used by combat vehicles, but cannot be installed in a rotor or body location.[1]

HarJel II and HarJel III Auto-Repair Systems, HarJel evolutions introduced in the Dark Age, were created by Clan Sea Fox. They are functionally identical, but the HarJel III system is approximately twice as effective as the HarJel II system. The HarJel Repair Systems combine HarJel with a fast-setting hardener that is pumped through a series of tubes under the unit's armor. When the tubes are breached by weapons fire, the HarJel and hardener compound mix together and fill gaps in the armor.[3]

Clan Sea Fox technicians prototyped HarJel III repair systems around 3137, and put them into production in 3139.[4]

HarJel Repair Systems are experimental technology available to BattleMechs, and cannot be pod-mounted. OmniMechs may use them as long as they are installed as fixed equipment. HarJel II and III are only compatible with standard, heavy industrial, and ferro-fibrous armor of all types. Each HarJel repair system is mounted separately and only protects one location. Only one HarJel system can be mounted in each location. To completely protect a 'Mech, seven systems would be needed, one for each arm, leg, and torso location. HarJel II and HarJel III systems cannot be mixed on a single unit.[5]

HarJel repair systems remain functional as long as the location where they're installed has at least one point of armor and the HarJel repair system hasn't been subject to a critical hit. HarJel systems provide a +2 modifier when rolling to check for hull integrity in underwater and other hostile environments. In addition, if a protected location takes damage, the HarJel II system will restore two points of armor to the location in the following End Phase. Though the two points of armor can repair a single point of damage, no location can carry more protection than was originally in the location. If torso locations take damage to both front and rear armor, the HarJel II repairs must be spread evenly between the two facings. If only one facing is damaged that facing gets the full effect of HarJel II.[3]

A critical hit to a HarJel repair System destroys it completely and forces another check for additional critical hits as if the location had taken an ammunition explosion (but no tests for pilot damage are made). Destroyed HarJel systems must be replaced, they cannot be repaired. Any 'Mech with a HarJel Repair system automatically gets the Difficult to Maintain Design Quirk.[3]

Each critical slot with a HarJel Repair System adds -1 to the unit's Defensive BV. The HarJel systems do add an Armor Modifier of 1.1, but only for those locations where the system is located. The HarJel systems don't work with Dark Age armor types, but will stack with another armor modifier. For example if the armor modifier is 1.2 and the location is protected by a HarJel II system, the total BV Armor Modifier will be (1.2 * 1.1 = ) 1.32.[6][7]