The 'Mech selection of BattleMechs: Plastic Miniatures resembles the fourteen "classic" designs from the 2nd Edition boardgame rulebook, minus the Chameleon TrainingMech and the construction rules example which was later canonized as the Merlin.

The miniatures were the same as those included in the BattleTech, 3rd Edition box set.[citation needed] 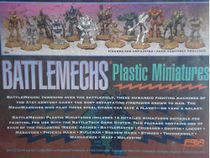