There is no proper "First Edition" of BattleTech. Instead, the initial game was called Battledroids. It was released by FASA in 1984. BattleTech Line Developer Herbert A. Beas II would later describe Battledroids as "BattleTech's predecessor", and its contents and scenarios were ruled to be not necessarily canonical for the BattleTech universe.

The game rules were different from the later (2nd Edition) BattleTech. Weapon firing and damage were a simplified system that combined all weapons into a single attack roll against the equally single armor rating of the target, forgoing hit locations in a fashion similar to the simplified combat in the later Alpha Strike ruleset. It was only the optional 'Advanced Battledroids Rules' that resembled what would become the classic BattleTech boardgame rules. Battledroids also had rules for tanks and armed jeeps that differed from the later BattleTech (CityTech) rules, and were more similar to the later rules for Elementals.

The Battledroids included with this first set as cutout playing pieces were the Stinger, Shadow Hawk, Archer, Griffin, Warhammer, Marauder, Crusader, Wasp, and Rifleman. All of these would later become Unseen. Rubber stands were included for the cutouts. In addition, the Merlin featured in the rulebook as a practical example for the construction rules, but it had no associated picture or cutout.

The rulebook was just a 26-page booklet without cover, and its last six pages were flip-sided and contained information about the universe. Like all subsequent boxed sets, the Battledroids box contained a pair of dice, and two (identical) fold-out paper mapsheets with a hex grid. The map layout of this basic playing map would remain unchanged until the 2011 Anniversary Edition.

The box also contained two small model kits that were identified as Shadow Hawk and Griffin Battledroids; the models were in fact imported "Dougram Combat Armor" and "Soltic H8 Roundfacer" models from Fang of the Sun Dougram. These models were out of scale and too large to fit on the gameboard's hex fields, and were not included with later editions of the boxed sets. 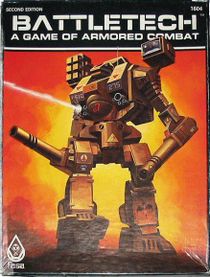 The first product to be named "BattleTech", the BattleTech, Second Edition boxed set is generally regarded as the quintessential BattleTech product. It kept the same FASA product number (1604) as Battledroids.

BattleTech came with a rulebook (with a proper cover) with gaming and 'Mech construction rules. These were based off the 'Advanced Battledroids Rules', and form the core of the BattleTech boardgame to this day with minimal changes. The vehicle and infantry rules from Battledroids were dropped.

Background information for the setting, namely the Inner Sphere during the Succession Wars era around the year 3025, was expanded in the rulebook, including the first mentioning of ComStar. Crests for the five Great Houses (plus three Bandit Kingdoms and five mercenary units) made their first appearance as colored faction counters to go with the 'Mech cutout playing pieces. Notably, there were no scenarios included in the rulebook.

The game stats for all but three Battledroids–now called BattleMechs–were changed to some degree to account for errors or changes in the construction rules, and four new designs were introduced: Locust, Wolverine, Thunderbolt, and BattleMaster. All of these, too, would later become Unseen. A fifth new addition was the Chameleon TrainingMech. 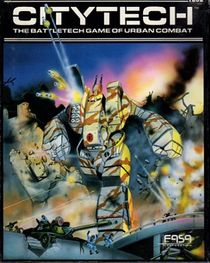 Although often mistaken for a mere BattleTech supplement or expansion, the CityTech boxed set was in fact a complete standalone game unto itself. Its rulebook reiterated the BattleTech rules and expanded them by adding playing and construction rules for different kinds of vehicles (substantially different from the Battledroids vehicle rules), as well as infantry, buildings, and paved ground as a new terrain feature.

The CityTech box contained a slew of cutout counters for various tanks, infantry units and buildings, and two (identical) mapsheets that were different from the previous BattleTech mapsheets. 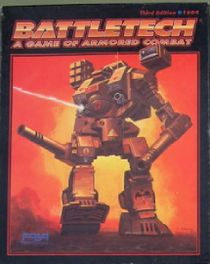 The third edition of the boxed set, released by FASA in 1992, replaced the paper cutout playing pieces with plastic miniatures. One was provided for each of the fourteen standard 'Mechs from the second edition. The new edition also contained a booklet with pre-made record sheets for these fourteen 'Mechs, but not for the Merlin and Chameleon for which neither miniatures nor record sheets were provided.

Although the rules as such remained unchanged, the rulebook was reorganized and partiallly rewritten. It notes that BattleTech sourcebooks, scenarios and novels have brought the "present" year to 3055, but the associated technological advancements are "beyond the scope of basic BattleTech" and the rules remain at the 3025-era technology level. Four generic training scenarios were included ("First Run", "Final Exam", "Trial by Fire", and "Divide and Conquer"). 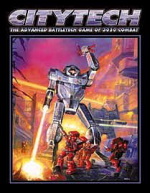 In the same fashion as the new (third) edition of the BattleTech boxed set, CityTech received a makeover for its second edition while retaining the product number. FASA went a bit further here, calling the game "The Advanced BattleTech Game of 3050 Combat" in the tagline and explicitly expanding the rules to "Level 2" (Clan Invasion era) technology. The set came with a record sheets booklet, altogether sixteen plastic miniatures on two identical sprues of eight units each (Javelin, Centurion, Orion, Victor, Uller, Black Hawk, Mad Cat, Daishi), and two double-sided sheets of color counters with black-and-white backside for buildings, vehicles, infantry, and effects. The mapsheets remained the same as in the first edition of CityTech. Like in the first CityTech edition, no scenarios were included. 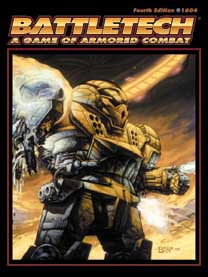 In the wake of the Unseen lawsuits FASA redesigned the basic BattleTech boxed set for a new edition in 1996, with a new lineup of 24 'Mechs that were not affected by the Unseen situation: Commando, Spider, Jenner, Panther, Assassin, Cicada, Clint, Hermes II, Whitworth, Vindicator, Enforcer, Hunchback, Trebuchet, Dervish, Dragon, Quickdraw, Catapult, JagerMech, Grasshopper, Awesome, Zeus, Cyclops, Banshee, and Atlas. This lineup would be used for all subsequent editions of the boxed set up until the 2019 edition, "A Game of Armored Combat". Because no plastic miniatures were readily available, FASA reverted to cardboard cutouts.

The fourth edition, calling itself BT4 in the rulebook, came with a redesigned rulebook. It also included a separate second booklet, Introduction to BattleTech, which contained quick start rules and a dedicated description of the BattleTech universe background and its history up until 3049, including the role of BattleMechs therein and a Technical Readout-style section briefly covering the 'Mechs contained in the boxed set.

The rulebook states that the "current" year of the BattleTech universe is 3058, while BT4 is set in 3049. It also makes reference to the Rules Levels previously seen CityTech, 2nd Ed., and states that the technology described in the BT4 game is Level 1 (whereas Level 2 includes the technology available in 3058). Three of the previous edition's four scenarios ("Final Exam", "Trial by Fire", and "Divide and Conquer") were included in the rulebook, with small changes; most importantly, the original (now unseen) 'Mechs in these scenarios were exchanged for other 'Mechs from the new lineup included with this edition. The fourth scenario ("First Run") was used for the quick start rules, and was moved to the other booklet accordingly. 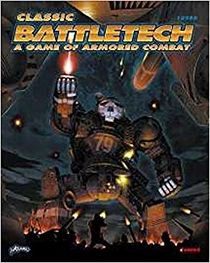 In 2001, Fantasy Productions (FanPro) acquired the license to what was now "Classic BattleTech", CBT for short. They created a new CBT boxed set, but aside from the rebranding as "Classic BattleTech" the changes from the 4th edition were minor. The featured 'Mechs and scenarios remained the same as in the previous (fourth) edition, though the altogether 48 cutout playing pieces (two for each of the 24 'Mech designs) had new artwork for them. In the preface, the current year of the BattleTech universe is given as 3067 while the basic (Level 1) rules remain at the 3025 level.

The arguably biggest change was splitting the previous set's Introduction to BattleTech universe background booklet into two, a Quick Start Rules booklet and one titled Classic BattleTech Universe, and adding a poster map of the Inner Sphere. A Record Sheets booklet was also included. 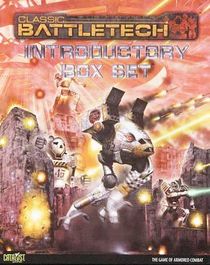 After FanPro's license expired in 2007, the Classic BattleTech license went to Catalyst Game Labs who created yet another new edition of the boxed set. Most importantly, the cardboard counters were once again replaced by twenty-four plastic miniatures that required no cutting or assembly. The 'Mech lineup remained unchanged since the 4th edition, and the three game scenarios remained the same except for changes to the map layout.

The rulebook was expanded to 80 pages, and abandoned the Rules Levels approach of previous rulebooks; instead, it now referred to Introductory, Standard (Tournament), and Advanced (Non-Tournament) rulesets. The rules by and large remain at the technology level of the year 3049, with some individual advanced rules provided, while the "current" year of the BattleTech universe was now given as 3085. Basic rules for vehicles and infantry were added back in, with additional training scenarios for these unit types, titled "Veteran Training Scenario" and "Elite Training Scenario", respectively.

The universe book was retitled to Inner Sphere at a Glance, but the content remained largely unchanged and it notably still only covers the universe through the year 3067. The Record Sheets booklet remained, and a "Painting and Tactics Guide" booklet was added that taught miniatures painting and some boardgame tactics. 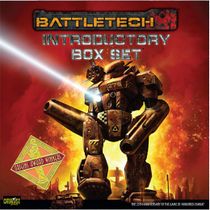 Delayed in production so that it actually came out 26 years after the BattleTech, 2nd Edition boxed set, this anniversary edition was redesigned from the ground up; also, by this time the "Classic" BattleTech moniker had been dropped and the line name had reverted to simply "BattleTech".

In addition to the usual 24 playing piece miniatures there were two high-quality extra miniatures of a Hellbringer (Loki) and a Summoner (Thor), though unlike the other miniatures these two had to be assembled from parts that came on sprues. 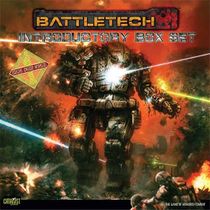 Essentially a re-release of the Anniversary Edition boxed set with largely identical content, the most important changes in this box over the previous one were the new cover and better quality plastic miniatures, albeit the 'Mechs as such remained the same. Only the two high-quality extra miniatures were changed to a BattleMaster and a Timber Wolf (Mad Cat). 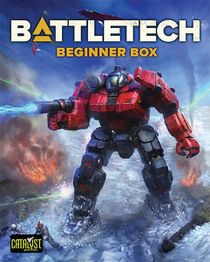 In 2019 CGL released two new box sets in tandem. A "Beginner Box" was sold more or less at cost, to lower the price barrier for new players to enter the BattleTech hobby.

The Beginner Box includes two fully-assembled un-painted miniatures, nine cardboard standees to act as additional BattleMechs, one double-sided mapsheet, cardboard hex terrain meant to be used with the maps, the "Quick-Start Rules" for the game, color record sheets for several variants of the included BattleMechs, a set of MechWarrior cards, a short novella titled Golden Rule written by William H. Keith, a booklet explaining the BattleTech universe during the Succession Wars era and two six-sided dice. The included Quick-Start Rules describe the fundamentals of standard BattleTech gameplay including turn structure, simplified movement and attack rules for BattleMechs and tables for movement and attacks on the back cover for easy reference by players. 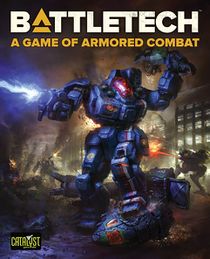 Released in 2019 together with the BattleTech: Beginner Box, this revised basic box set was redesigned from the ground up. The set includes eight plastic un-painted miniatures of the Awesome, BattleMaster, Catapult, Commando, Locust, Shadow Hawk, Thunderbolt and Wolverine, a 56-page rulebook, a 16-page booklet containing record sheets for several variations of the included BattleMechs (meant to be photocopied), a 16-page universe primer describing the factions during the Succession Wars, a 24-page novella titled Eyestorm written by William H. Keith continuing the story from Golden Rule, 8 MechWarrior cards describing the unique abilities of MechWarriors, a heavy-stock reference sheet containing all tables needed to play under the included ruleset, two full-color double-sided mapsheets for a total of four maps, a punchboard containing additional BattleMechs and terrain, one Alpha Strike card for each miniature and two six-sided dice. This box set's mapsheets, miniatures and punchboard terrain are fully compatible with those included in the Beginner Box. The set also includes an advertisement for Iron Wind Metals.
Retrieved from "https://www.sarna.net/wiki/index.php?title=BattleTech_boxed_set&oldid=604158"
Categories: