Berith, born Benjamin Emory[1] (b. 3030 - d. 3???) is a Word of Blake military officer and Ascended warrior of the Manei Domini. He went on to obtain the Domini rank of Specter Precentor Sigma[2].

Berith, as of 3072, appears to be of average height and build. His most obvious cybernetic enhancements are his eyes, which are of metallic blue color and glow in dim light.[3]

Born Benjamin Emory, he was raised on Terra by ComStar employed parents. He joined the ranks of ComStar at age 15, beginning his road to become a MechWarrior.

Emory fought with the ComGuard's Sixth Division in the battle of Devil's Bath in 3052 against Clan Steel Viper's First Steel Viper Guard.[4] After the conflict, he developed a deep-seated hatred of the Clans. His experience in the battle improved his military education and he became an expert at Combined Arms tactics.[5] Emory later went on to join ComStar's ROM as a member of their special operations team, Blake's Wrath. By 3057, he had become the head instructor of the Wrath's training group.

In service of Word of Blake prior to the Jihad[edit]

He was in command of the ROM training compound in the Terran city of Cairo, when Operation ODYSSEUS began. Emory surrendered his command to elements of the 2nd Division of the Word of Blake and swore loyalty to them and Terra. He and his staff were interrogated for a period of six months, after which they given places in Blake's own special operation forces in their version of ROM, Light of Mankind. Emory chose to remain an instructor for the Light of Mankind. His students were among the best to graduate and led to many of his pupils being placed in the special operations groups Venatori and Opacus.

When the Jihad erupted, Emory was called to action and commanded a number of special operations against worlds in the Chaos March. These operations helped solidify the Word of Blake control in what would later be the Word of Blake Protectorate. Among his actions was a strike against the planetary governor of Keid in April 3068. He and other members of his Light of Mankind team conducted a HALO drop in Purifier Battle Armor onto the planet.[6] Emory was injured during the operation and during his hospitalization received cybernetic replacements and enhancements, becoming one of the Manei Domini.

Precentor Apollyon requested Emory train new Manei Domini troops on Circinus. By 3069, he was promoted to Precentor in command of the newly combined special operation group Opacus Venatori.[7] During this period he was taken under Apollyon's wing and elevated to the highest rank of the Manei warriors.

On Gibson, he personally accompanied Apollyon and his team in the hunt for the New Gibson Freedom League, systematically eliminating the rebels.[8]

Clash with the Bounty Hunter[edit]

In 3072, Berith was in pursuit of Victoria Parrdeau and her journal. Pursuing her to the world of Dalton in the Free Worlds League, he discovered that he was not alone in seeking her. Using Irian Corporate Security as a means to his search, he discovered an apparently compromised safe house. Berith discovers his prey is gone, but he then quickly pickup team member of the legendary mercenary, the Bounty Hunter from residue from crime scene. He then interrogates him and implants him with tracking device to follow him to the Bounty Hunter.

Beirth finds that the Bounty Hunter has taken a Irian Luxury AirShip, the Wind Dancer. Beirth quickly acquires a stunt plane and pursues the Hunter. He quickly jumps from the plane, meets up with the Hunter. They face off in one of the Wind Dancer's bar area. There Berith uses his cybernetics to gain upper hand, while taunting the Bounty Hunter. In midst of the fight, he notices a women's satchel get strapped around the Bounty Hunter's signature green armor. However, despite his edge, the Hunter manages to stay one step ahead of him. After emptying their guns, they grapple each other various in martial techniques. Ultimately, Berith is out maneuvered as explosions began go off, the Hunter lunges forward; activating his Jump Pack. Berith tries to stop him from escaping, but blacks out from magnetic pulse grenades that the Bounty Hunter had dropped as he left. After his cybernetic electronics recovers, he finds the Airship rapidly descending in pieces as explosions ring out around the ship. Falling at more than three kilometers, with no escape devices available, Berith jumps to the safety of nearby rock formations that the ship was about to crash into.[9] 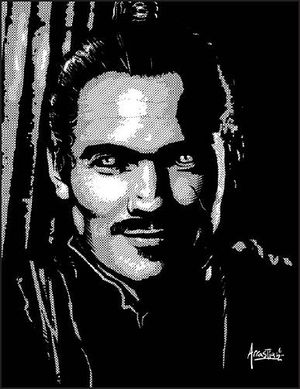 Precentor Berith as of 3075

By 3077, Berith had become Apollyon's second-in-command, he also was given more of Apollyon's command responsibilities.[10]

On the 30th of April 3078 it was revealed by Colonel Marcel Webb - Commanding Officer of the Star Seeds mercenary unit and head of security for the allied coalition - in a news broadcast from Kittery that the allied coalition was filing criminal charges on behalf of all the allied nations against a number of senior Word of Blake senior or high profile figures, including Berith. The coalition intended to charge Berith with treason, espionage, terrorism, murder, and genocide under his original name, Benjamin Emory.[11]

He succeeded Apollyon as supreme leader of the Manei Domini in the later years of the Jihad. He was seen for the last time on planet Devil's Rock, after lead an assault force to kill the ComStar agent Tempest Stryker. No further sightings of Berith were reported.[12]

While still Benjamin Emory, Berith was married to Rianne, whom he met on Solaris VII. Later, they had two children: a son Jeremiah, and a daughter Alyssa.[13] His young daughter later died of cancer, which led to his family going their separate ways.[14]

He also had a son, Precentor Alexander Emory[15].

The Commanding Officer of Blake's Wraith Training Center in Cairo, Terra as of 3057.

The Commanding Officer of the Opacus Venatori, since 3069.

While in command of the Opacus Venatori, he piloted a customized Archangel assault OmniMech, painted in a unique scarlet scheme to denote his Ascendance to Manei Domini.[1]

In the short-story found in Jihad Secrets: The Blake Documents Berith's noted as having the rank of Spector Precentor Omega, which is incorrect. The Omega name is Manei Domini rank of Adept.[16]