Biendieu is a short story by Annie Reed that was published electronically via BattleCorps on 29 September 2006. It was also published in print in the third BattleCorps print anthology, Weapons Free, in 2012. 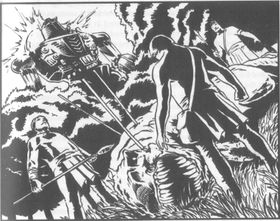 The first-person narrator lives with a primitive neolithic tribe on Farhome as a cleric to 'Biendieu', a god-like being who is the tribe's protector. The tribe wears his symbol on their bodies and the narrator also paints it on the walls of their home cave.

Witnessing the landing of a spheroid DropShip one night but failing to understand its nature, the tribe's hunters gather under the leadership of their strongest warrior, Mautre (incidentally the father of the narrator's daughter). Over the warnings of the tribe's historian that the 'thing' will bring hostile invaders from another world, the hunters set out to investigate it and fight it if it is hostile. The narrator includes herself in the expedition. After a day's travel through the jungle, they are near the DropShip's landing site where they come under attack from a great predatory lézard de tonnerre. The beast is in turn killed by a BattleMech that has implicitly arrived with the DropShip, saving the tribesmen. The narrator then identifies the 'Mech as 'Biendieu'–it is revealed that the image she has been painting actually depicts a 'Mech.