Bjorn was originally brought up in a MechWarrior sibko, but failed in his initial Trial of Position. However, he was given a second attempt to join the Warrior Caste in a different branch of the Clan touman per Ghost Bear tradition. He would excel in his new training as an aerospace pilot and won the rank of Star Captain by defeating three opponents in his second Trial of Position. 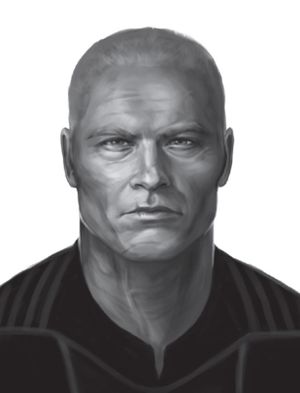 Bjorn Jorgensson at age of 37

Bjorn served in the 140th Striker Cluster in the early waves of Operation Revival. However, he would only see combat in the second wave when elements of Delta Galaxy were used to retake worlds that had rebelled. Shortly there after, he would test out as a Star Colonel and was about to take command of 140th when outside events changed his path.

The death of saKhan Theresa DelVillar caused great change with the Ghost Bears. The Bloodnamed of the Clan would choose Aletha Kabrinski as saKhan to replace Theresa. Almost immediately upon taking the office, Aletha would issue a call for dismissal against Khan Karl Bourjon for the failures of the Ghost Bear campaign. The Bloodnamed of the Clan quickly supported this call and nominated Bjorn for the position of Khan. Karl Bourjon would issue a Trial of Refusal against this move by his fellow Bloodnamed and challenged Bjorn. After a brief battle, Bjorn defeated Karl and offered him hegira thus assumed the title of Khan.

Upon taking office, Bjorn worked to correct several of the mistakes that the Clan had taken. With his training as both a MechWarrior and an Aerospace pilot, as well as his strategic thinking, Bjorn quickly turned everything around for the Ghost Bears. The Clan would take more worlds than any other Clan in the fourth wave, save Clan Wolf, and were supremely positioned to take the lead toward Terra in the next wave. However, the Battle of Tukayyid would alter the fate of the invasion.

ilKhan Ulric Kerensky's announcement of the proxy battle with ComStar on Tukayyid caused division between Bjorn and his saKhan, while she held complete confidence in victory, he disapproved of the entire batchall for its inclusion of the fifteen-year truce. Ultimately however, the Bears took part in the Battle of Tukayyid, earning the right to descend in the fifth hour of combat with an official bid of three front-line Galaxies; Alpha, Beta and Delta. [4] [5] [6]

Assigned the primary and secondary targets of Spanac and Luk, the twin cities were defended by the Com Guards' veteran ranked First Army supported by the green Fourth Army. Confident in the strength of their troops, the Bear Khans laid out a simple and direct plan, sending their elite Alpha Galaxy to target Spanac while Beta and Delta focused on Luk. While the First Army commander's Precentor Katherine Luarca's refusal to commit the extremely green Fourth Army to the fight and the Bears' superior skills allowed Alpha to easily take Spanac, the Com Guards succeeded in blunting the Bears' assault against Luk, with the Bear Khans redeploying Beta and Delta to reinforce Spanac. [4] [5] [6]

Leaving Beta and Delta to defend their captured primary target, the Bears' Alpha Galaxy advanced towards Luk, the Fourth Army coming close to folding until Precentor Luarca commanded the remains of the First Army in a strike against the Bears' primary supply depot at Spanac. As she hoped, Luarca's attack forced the Ghost Bears to choose which was more important, the now vital ammunition or continuing the offensive against Luk. Eventually choosing to return to Spanac, while Alpha fought off the raid, they suffered such losses in the process that they could not resume the attack on Luk. [4] [5] [6]

Able to hold Spanac but lacking the strength to take Luk, ilKhan Kerensky declared the Ghost Bear campaign ended with a partial victory. With Precentor Martial Anastasius Focht preparing to redeploy additional Com Guard troops to face them, Bjorn and his saKhan chose to safeguard what they had won and accepted the judgement with minimal complaint. [4] [5] [6]

Bjorn is believed to have been killed on Arc-Royal in a bombing in January 3073.[3] Bjorn was attending a summit called by Victor Steiner-Davion in an attempt to organize those resisting the Word of Blake. The summit was attended by leaders from the Lyran Alliance, Draconis Combine, Federated Suns, ComStar and the Clans. Fritz Donner, the former commander of the Black Warriors unit from the Circinus Federation, attended as a key witness testifying on Word of Blake operations and activities within the Word of Blake Protectorate; unknown to the other attendees, Donner had been implanted with a sophisticated suicide bomb. The bomb was detonated on the 22nd of January, killing or injuring many of the delegates and paralyzing or disrupting attempts by the various allies to coordinate efforts against the Blakists.[7][8] [2]

It was speculated that the death of Bjorn was one of the reasons for the driving hatred of the Word of Blake displayed by Clan Ghost Bear forces during the Jihad, as well as the ferocity of their actions towards both the Blakists and the allied forces caught up in the Ghost Bear campaign.[3]