The Blade Runner Magazine was a spanish magazine dedicated to Science Fiction and Fantasy. It run for several years and was a well known magazine of cinema. 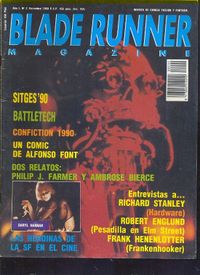 In the second Magazine, an specific article on the BattleTech Hobby, explaining generally how the game works and then going on with description of the recently published material in Spain: BattleTech, 2nd Edition, CityTech, AeroTech and then the supplements on the The Fox's Teeth: Exploits of McKinnon's Raiders and the Tales of the Black Widow Company, same as the incursion on role-playing with the MechWarrior: The BattleTech Role Playing Game