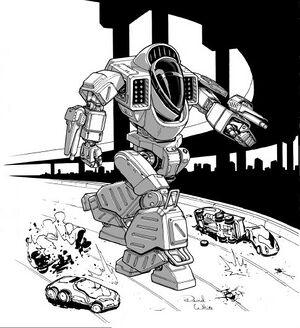 Arbalest 3 in the brawler unit role

Brawler is a battlefield role performed by certain models of 'Mechs, as well as other ground units. Brawlers tend to be slower and equipped with either long range weaponry or heavier amounts of armor.[1][2][3][4]

Brawlers are line units, typically assigned to battle lances, and are considered to have less mobility than some other combatants, such as Skirmishers. However, they compensate for this with some long-range weaponry and more or heavier armor. Most often assigned to assault missions, they also serve to protect the slower Juggernauts.[1][2][3]

Considered poor performers in mobile or long-term battle scenarios, they do well in defensive roles or assaults on geographic locations, such as fortresses. Their escort role for Juggernauts can be reversed, with good effect upon similar enemy 'Mechs, especially when paired up with one or two other Brawlers. They are also effective at forcing Snipers and Missile boats from stationary positions and for holding the line against a charging enemy.[1][3]

In Alpha Strike, a unit is identified as a Brawler when it meets the following standards[2][4]:
Speed: Medium-Fast
Armor: Any
Range: Medium
Special: no requirements