The Buckminster system was home to at least one habitable world, Buckminster VI, and as of 3145 was the administrative capital of the Buckminster Prefecture of the Benjamin Military District within the Draconis Combine.[4][5]

The Buckminster system is located near the Aubisson and Port Moseby systems[6] and consists of a class A9III primary orbited by at least six planets. During the thirty-first century a recharge station was in place at the system zenith jump point.[1][3]

The Buckminster system was settled during or shortly after the First Exodus from Terra[7] and by the end of the Age of War Buckminster was a part of the Lyran Commonwealth.[8]

Buckminster VI - more commonly known simply as Buckminster - is the sixth planet in the system and has a single moon named Geodesia.[3]

The planet primary continent of the planet is named Sanjusendo, which featured the planetary capital of Buckminster City on its northeastern coast.

Notable features of Sanjusendo includes large island along its southern coast named Lexham Island, Yeloff Peninsula to the north of island on main continent south shoreline, and a peninsula named Coloa on its southwestern most tip. 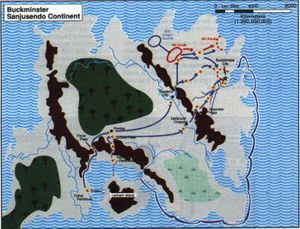 Map of Continent of Sanjusendo during the Forth Succession War

For most of Buckminster's history it was an agricultural world whose light industry produced agricultural equipment. The products of the world were often sent to the nearby Lyran world of Port Moseby.[1]

Buckminster was captured by the Draconis Combine during the First Succession War,[9][10] and after Buckminster was made a Prefecture capital in 3005, the DCMS stationed the Second Sword of Light on the world.[1]

The presence of military forces on the world, and the exercises and training runs that they require, dramatically reduced the productivity of the farmland. This had a bad effect on the local economy. These changes to the world took place in a scant two decades, and the population spawned several covert and overt antigovernment groups as a result of the damage inflicted on their world.[1]

During the late Succession War Era, circa 3005, the planet had become the capital world of its own Prefecture.[11] The presence of so many BattleMechs started to affect the planet's crops and finally angered the people of Buckminster. Since then many overt and covert antigovernment groups have formed, giving the numerous ISF agents on the planet plenty to do.[11]

During the Fourth Succession War in October 3028, this planet was targeted by Lyran forces lead by General Roman Steiner. The Draconis Combine's defenders consisted of General Goshi Tengwan, commanding the 2nd Sword of Light BattleMech regiment and other planet militias. The invasion force large aerospace formations pushed back Buckminster's aerospace forces landing the Third Royal Guards and other supporting regiments on Sanjusendo's lightly defended southern coastline in two prong campaign towards the planetary capital to the northeast.

Lyran forces marched from Coloa coast long the coastline to attack the city of Pontiac, where a concentration of a company of the 2nd Sword Light's Heavy 'Mechs were stationed along with three tank regiments, three infantry regiments, and artillery battalion. General Steiner would instruct his RCT to surround the city try invade it. Initially, Steiner forces would be held off from due to the Kurita Artillery battalion effective accuracy. It would take the Royal Guards' aerospace forces to silent the guns to allow them take city. The Lyran ground forces would pass through the Greerson Mountains. Kurita forces had put a stiff defenses against the Lyrans, thus calling down special squadron of artillery armed DropShips, which used to subdue the forces defending the passes. The appearance of the mobile artillery flying behind enemy lines proved to be demoralizing. The DropShips' bombardment would cause Kurita forces to retreat in disarray. The Kuritan surviving elements of the Battle of the Passes would manage to return to Buckminster City where, they would awaited the 6th Arkab Legion to arrive to reinforce them. Six weeks would pass, during this time the Legion would make its landings to the north of the fighting, where they attempt to confront the Third Royal RCT. Royal Guards would receive their own reinforcements in form of the 20th Arcturan Guards, together they would engage in six week campaign trying prevent the Legion to link up with the 2nd Sword of Light. General Steiner utilized his DropShip squadron to stage artillery attacks from various locations, devastating the Legion. By December the Lyrans laid siege to the 2nd Swords held up in Buckminster City.[12]

After four months, the Guards by this time were engaged with the Legion to contain them to the north. However, they received orders from General Steiner for them to head south to link with bulk of the Lyran forces in effort to take the capital in May 3029. By June, Lyran forces would charge into the city attempting to take it. However, city's defenders had built up its defenses for such an attack. The 2nd Sword of Light and its supporting elements would conduct surprise attacks on them as they entered the city. While this occurred, the 6th Arkab Legion took advantage of the Steiner invasion of the city to break out from the north, punching through the Lyrans' light screening force. This would ultimately break the Lyran siege of the capital and together with the 2nd Sword, forcing the Steiner forces withdraw from the planet once it became clear they wouldn't be able take the city.[13]

The Word of Blake launched an assault on Buckminster during the second week of October 3069; the Blakist ground troops were backed up by a fleet of Pocket WarShips and during the course of their assault shattered several cities on the planet in addition to the defending Seventh Amphigean Light Assault Group.[14] Buckminster was then attacked for a second time by the Word of Blake; the second attack lasted from the 24th to the 30th of April 3070, and was successfully stopped by the defending Delta Regiment of Wolf's Dragoons, although the fierce defense of Buckminster cost the Dragoons greatly.[15]

During the Jihad the Second Sword of Light turned against the Dragon. This disgraceful action increased the ISF presence on Buckminster as the world served as the headquarters of the Second. As of 3079 every level of government and corporate board was being observed and investigated by the Internal Security Force.[3]

- At this point in time the 6th operating at 55% of full strength, with 90% of their equipment featuring upgraded technology.