This article is about melee weapon from Unbound. For the brand name of AMS, see Anti-Missile System. 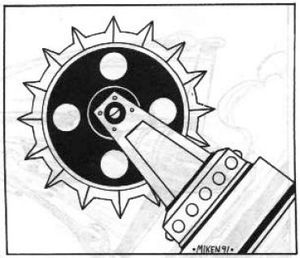 The Buzzsaw is a piece of construction equipment that occasionally found its way into the arenas of Solaris.

The Buzzsaw was used on certain arena 'Mechs to inflict damage on an opponent instead of a punch or other physical attack. It replaced the hand of the 'Mech equipped with it.

The Buzzsaw was introduced in Unbound, which specifically states that the Buzzsaw was not suitable for tournament play and didn't introduce the weapon into general use.[1] The Buzzsaw was likely replaced by the Chainsaw and Dual Saw in TechManual.

The Buzzsaw replaced the hand actuator, occupied two critical slots in the arm, weighed four tons, and generated three points of heat. Though it inflicted 2D6 points of damage, it would shatter and be useless on a to-hit roll of 2.[2]