Cal Jorgensson was a twenty-eighth century Clan MechWarrior, officer, and the last Khan of Clan Widowmaker.

Jorgensson was known in his younger years as a brash and outspoken individual.

Cal Jorgensson was among the many Nicholas Kerensky followers who joined him for the Second Exodus to Strana Mechty.[3] He was also the older brother of Hans Ole Jorgensson, future saKhan of Clan Ghost Bear.

After the initial assaults of Dagda in September of 2821, Jorgensson along with the rest of his Clan's Cluster attacked the Pentagon Power known as the Oriente Dominion. The Dominion forces were only equipped with tank and infantry forces, which Cal and the rest of the Widowmakers force demolished easily. However, Jorgensson's life would be changed forever by the sound of a gunshot. Within the recently secured village of Sunflower on October 21st, saKhan Mariel Sanders was assassinated by a gunman disguised as a trader. The Clan suspended its combat operations for two days. After a long meeting, the Warriors of the Widowmakers chose Jorgensson as their new saKhan. He was the first individual to be elected by provisions written by Nicholas Kerensky, in case of the death of a Khan in the field.

Once elevated, saKhan Jorgensson's abrasive personality triggered bad relations with his Clan's fellow invasion partners; Clan Goliath Scorpion and Clan Fire Mandrill. He triggered these ill-relations by referring to those Clans' combat operations as badly organized sideshows to Widowmaker operations. Scorpion Khan Cyrus Elam, angered by Cal's brash words, attempted to initiate a Trial of Grievance against the newly elevated saKhan. However, ilKhan Kerensky refused them permission to conduct the trial. He and his Khan Karrige would annihilate the remaining soldiers of the Oriente Dominion, an act they viewed as justice rendered for the assassination of saKhan Sanders.[4]

Later Years: the Brutal and the End[edit]

During the Wolverine Treachery, Khan Karrige would be killed in the conflict with the now Not-Named Clan in 2823.[5][6] Jorgenson is elevated to senior Khan of Widowmakers.

However, Clan affairs had not gone smoothly with its own lower castes. The Widowmakers' merchants staged an insurrection due to the freedom that Clan Wolf merchants seemed to enjoy. With Clan Wolf's economic growth, the Wolves' merchants challenged Widowmakers' Merchants for years' worth of bauxite ore used to make ferro-aluminum from its mines on Dagda. Khan Jorgensson and his fellow saKhan attempted to block the trial from taking place, and the Wolves' merchants called on its warrior Touman to fight a formal Trial of Possession. Despite the Widowmakers' loss, its merchants were awed by the respect Wolves' merchants were given by its military and the freedoms they had received. The merchants protested for same rights as their Clan Wolf counterparts, which in kind resulted in what was seen by Khan Jorgensson and his fellows as insurrection. Jorgensson's Widowmakers were known to be at times brutal with their own civilian population, and Khan Jorgensson had the merchants killed. The brutality exhibited by Jorgensson's Clan Touman shocked the greater community of the Clans. Khan Jorgensson claimed it was an internal affair, and pointed a finger at Wolf Khan Jerome Winson as the cause of the Widowmakers merchant uprising.

Khan Winson turned to the Clan Grand Council, who decreed that the Widowmakers were unfit to rule, and the Council agreed to the Wolf Khan's demand for a Trial of Absorption. Khan Jorgensson demanded a Trial of Refusal to fight for the right of his Clan to continue to exist. 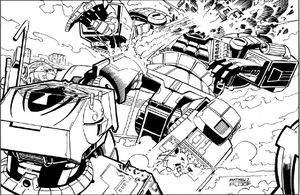 In the course of events, Khan Jorgensson and Winson would call a Trial of Grievance at the height of the battle. Jorgensson dueled the Wolf Khan in his BattleMech, where he did not fare well against Winson. As all looked lost for him, a Widowmaker Star of 'Mechs broke the Circle of Equals to save him from being killed by Khan Winson. The 'Mechs of the Grand Council broke the circle as well to stop Widowmaker 'Mechs from interfering. Jorgensson's 'Mech at the time had been knocked down. Reportedly dazed, Jorgensson saw an Atlas peering down on him, and he then fired into the Atlas's head. In doing so, he found to his dismay he had killed the ilKhan. This sent the Wolves into a frenzy, in which they slaughtered every last one of the Widowmakers on the field.

Ironically, Khan Jorgensson had survived the battle only to be executed shortly after, despite his protests that Nicholas' death was an accident.[7][8][9] The Widowmaker Clan didn't survive much time to his last khan: Nicholas death turned the Trial of Absorption into an almost Trial of Annihilation. Very few Widowmaker warriors were taken alive, but their genetic legacy survived in Clan Wolf.

He piloted a modified Highlander when he accidentally (or deliberately) killed ilKhan Nicholas Kerensky in a duel between himself and Wolf Khan Jerome Winson during a Trial of Refusal.