Callie's Call is a story by Victor Milán that was published online on BattleCorps on 22 October 2005. It was also published in print in the second BattleCorps print anthology, First Strike, in 2010. 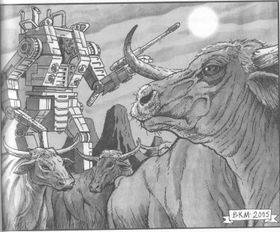 Having lost her father to cancer two years ago, young Callista "Callie" MacDougall returns to her family's farm in a Ranchhand AgroMech to learn that her mother has married again. Callie's stepfather, Rance Mason, forbids women on "his" farm from working or driving the 'Mech, and the farm subsequently deteriorates while Rance Mason sexually assaults young Callie and voices interest in her much younger sister. The situation comes to a head in 3039 when a band of marauders appear who count a dilapidated Locust BattleMech among their forces. Callie has an argument with her stepfather and refuses to defend him with her father's rifle; her mother will hear nothing about Mason having assaulted Callie. Callie runs off with her little sister and hides. While the raiders kill her mother and stepfather, she mounts the Ranchhand, attacks the Locust with it and flees towards a herd of Range-bull cattle where she invokes a stampede that brings down the Locust. She then proceeds to kill each and every marauder on the farm with the AgroMech's machine gun.

In the aftermath, a deputy mispronounces "Callie" as "Kali", which she decides to adopt as her new name.