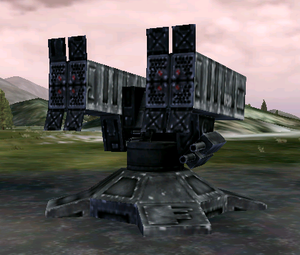 A Calliope Turret as depicted in MechWarrior 4: Vengeance

The Calliope Turret is a defensive structure often used in the Federated Commonwealth. It is equipped with a range of weapons and is mounted on a turret. The structure often is placed at strategic locations such as on top of buildings or on towers. Calliope turrets require both a Turret Control Tower and a Power Generator to operate, making them highly vulnerable if those can be found and destroyed.

The turret's armament consists of a pair of Large Lasers supported by two Medium Pulse Lasers. To boost its long-range capabilities, it also carries four LRM-5s. This means that those with an anti-missile system will be completely impervious to its missile weapons.

Computer games are explicitly excluded from the list of products that contribute straight Canon to the BattleTech universe while at the same time it was stated that the IP owners are "not in total denial about these sources either"; it has also been stated that fluff from certain official, licensed products (namely certain computer games including those produced by FASA) can be assumed to be part of the shared universe as long as it is not directly contradicted, and makes sense. On this premise, the Calliope Turret is considered to be an apocryphal structure.