Cassie DeBurke is credited with the invention of the hyperpulse generator and FTL communications.

During the so-called Good Years of the Star League, Cassie DeBurke was a brilliant young professor from the University of Terra located near the Court of the Star League, an authority on the faster-than-light physics theories of Thomas Kearny and Takayoshi Fuchida. On April 14th 2614, First Lord Nicholas Cameron appointed Joshua Hoshiko as the Star League's Minister of Communications with the express mission of developing a faster means of communications to aid in the rule and expansion of the already massive Star League. In February 2615, Hoshiko enlisted DeBurke as a member of the Technological Communications and Specifications Project to investigate possible means of FTL communications. [1][2][3]

In one obscure section of Kearny and Fuchida's papers published in 2022, they speculated on the possibility of creating artificial jump points and they provided the equations for generating them. Because the energy costs would have been astronomical, the scientific community did not pursue these hypotheses any further, but DeBurke saw infinite possibilities in them. While the energy costs to send physical matter were excessively high, Professor DeBurke theorized that radio waves could also be transmitted via such jump points, their lack of mass lowering the energy requirement considerable and putting it within the range of even modest reactors.[1][2][3]

For the next 15 years, Professor DeBurke and her research staff worked secretly and feverishly, receiving the final clue following a breakthrough in hyperpulse generator technologies developed by Rhylene HyperTech of Oriente in the late 2620s which allowed her to make her theories reality. The culmination of their work was the first HPG station, built in 2629 just outside the Court of the Star League, which transmitted the first HPG message from Terra to New Earth on New Year's Day 2630. In tribute to past pioneers in communications, DeBurke's first message was "Watson, come quick, I need you".[1][2][3][4][5]

For her historic and pioneering role in the development, DeBurke would receive considerable acclaim. The successor to the Star League Communications Network, ComStar would also honor her achivements, most notably the creation of the Cassie DeBurke Institute for Hyperspatial Studies in Sydney set up to restore the HPG net in the wake of Gray Monday.[6] 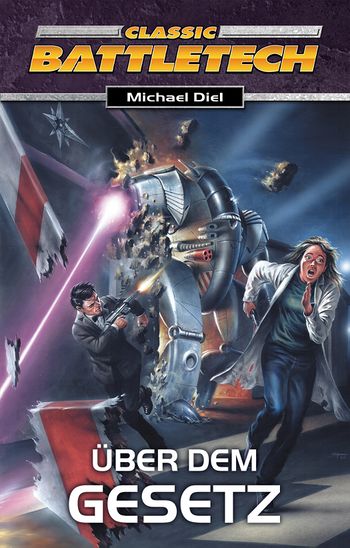 Cassie DeBurke appears as a supporting character in the (apocryphal) German novel Über dem Gesetz. In the book, she is assaulted by two wanted assassins on 24 July 2600 and her research results are stolen. She joins David Gibbs, a Star League secret service agent, in a chase of the attackers, one of whom eventually hijacks a modified Chameleon 'Mech to attack his pursuers. This scene is shown on the book cover (with Cassie DeBurke depicted in the foreground on the right).

The Chameleon is brought down by another 'Mech piloted by Gibbs. Cassie DeBurke, having previously jury-rigged a fire extinguisher system to track the fugitive, continues to provide some help to Gibbs. She is also present when Burton Avellar is murdered on Alpheratz some time around late 2600/early 2601.