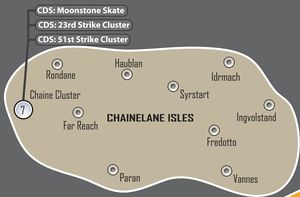 The Chainelane Isles is a region in the deep periphery spanning some 100 lightyears and situated 100 lightyears coreward of the Greater Valkyrate. Described as a "miniature Inner Sphere", the Isles are not a unified realm but instead are home to numerous small duchies or principalities. Like the successor states of the Inner Sphere, these neighboring principalities constantly vie for supremacy and have been fighting Succession War-style combat for a long time.[1]

During the Clan Invasion of the Inner Sphere, the Chainelane Isles stood in the path of the Clan juggernaut. However, only the Duchy of Vendôme's military effectively disappeared "overnight" within the Isles. This led to speculations by ComStar that the Clans may have tested their mettle on an "Inner Sphere" opponent before reaching the Inner Sphere's periphery border.[2]

In 3055, conflicting mercantile interests between Clan Diamond Shark and the Hanseatic League resulted in skirmishes near Chainelane space. Though the Diamond Sharks defeated the Hanseatic CPF, trade has not diminished between the Hansa and the Isles.[3]

Each planet is controlled by several factions.