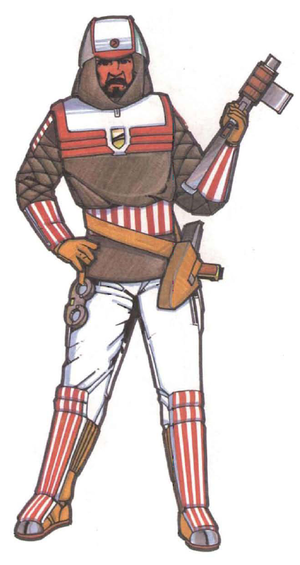 Officer wearing a CGC uniform, with handcuffs and a stunner on his belt, and wielding a crowd control rifle

The Civilian Guidance Corps (CGC), also known as the "Friendly Persuaders", is the civilian police force on worlds within the Draconis Combine.

At least on the world of Kawabe they are under oath to serve the local Prefect.[1]

Also described as a local constabulary,[2] the Friendly Persuaders are a branch of the Combine's Ministry of Peaceful Order and Honor (Kakun, Ministry of Justice).[3]

They wear bright, red (or pink)-and-white "candy striped" uniforms specifically to be highly visible, and thus possibly deter troublemakers through their presence.[4][2]

Although typically armed with non-lethal weapons such as standard-issue police stunners,[4] they can also carry lethal weapons. The CGC can deploy as Heavy Riot Infantry,[5] and they have even been known to use PoliceMechs. Altogether sixteen ultralight "machine-gun toting 15-ton" 'Mechs from the CGC on An Ting (including at least one GS-54 Guard and possibly a company of Guardians) were drafted into the Ryuken to fight against Wolf's Dragoons in early 3028.[6]