Visions of Rebirth is the second book in the Founding of the Clans trilogy. It narrates how Nicholas Kerensky leads his followers on a second Exodus to escape the Pentagon Civil War, and reforges them into the Clans—his vision of an utopia warrior society.

The book's original manuscript remained unpublished for some two decades. After having written the first two books of the planned trilogy, Bills found that FASA unexpectedly ceased active operations in 2001, and Roc Books voiced no interest in publishing more novels in the BattleTech line which looked as if it was going to be discontinued. Meanwhile, the license was transferred to WizKids for their MechWarrior: Dark Age game which was set in the setting's future, with its own, distinct game and novel line.

Fantasy Productions, the German BattleTech license holder, subsequently acquired the license to what was now dubbed "Classic BattleTech". They started a line of entirely new, original BattleTech print novels in German from 2004 onward. As part of that line, the manuscripts for the first two Founding of the Clans novels were translated and published; Visions of Rebirth was published as Clangründer: Traum in 2006 (see below).

Over the course of the 2019 crowdfunding campaign for the BattleTech: Clan Invasion boxed set, a re-release of the Founding of the Clans trilogy was unlocked as a stretch goal. Randall Bills and CGL decided to revise the first two books in the process, creating new, authoritative versions that were expanded over the originals and partly rewritten. The authoritative version of Visions of Rebirth was published on 27 October 2021.

From the back cover (translated from German)[edit]

Note that this plot summary is for the 2006 German edition. The revised and expanded 2021 authoritative edition is currently under moratorium.

As the Second Exodus fleet makes planetfall on Strana Mechty on 8 June 2802, Raymond Sainze and Windham Khatib discuss their feelings of anxiety about the whole idea of a second exodus. They agree that they need Nicholas Kerensky to lead them, but also need Andery Kerensky to keep his brother Nicholas in check in this.

Nicholas sets up a bivouac near the Strana Prime colony and bluntly tells the local governor that they are here to stay, then proceeds to erect a new city—Katyusha, the future capital. Together with his consort Jennifer Winson Nicholas has grandiose plans about submitting the SLDF troops to ruthless live-fire tests, to weed out the weak and form a core of elite soldiers. He uses their reverence of the late Aleksandr Kerensky and begins to build a cult around his father and himself. Andery is alarmed by the numerous subtle changes instigated by Nicholas, and gets increasingly jealous because his lover Dana Kufahl is among Nicholas' most ardent supporters.

During one of the live-fire trials, Andery accidentally kills another MechWarrior, Captain Johann Keyes. Shocked over the unnecessary death he powers down his own 'Mech, and two years later to the day (on 1 May 2805) he climbs Simon Mons and pours Keyes' ashes in the wind, noting the man had no relatives and only a few friends and thus would not be remembered for the ultimate sacrifice he gave for Nicholas' dream.

By 2807, Andery is a rifleman training instructor again. He is uncomfortable with the young age of his charges and about the foster family program that is now in place. His students are among the most successful in the tests, and his casual use of "Aff" spreads through the ranks and is adopted as part of a new speaking pattern that Nicholas models for his utopia society.

Windham Khatib meanwhile is worried that his church had to make room for the city's construction, and Nicholas Kerensky seems unlikely to keep Jennifer Winson's promise to rebuild it eventually. He shares his sorrow with Andery who is unable to help him, realizing that Nicholas will not tolerate prayers to another god.

On 11 June 2807 Nicholas Kerensky delivers a speech where he announces the formation of the Clans from a core of eight hundred elite warriors, and his intention to return to the Pentagon worlds to reconquer and pacify them. He concludes his speech with "Seyla", the word his and Andery's mother had used to utter at the conclusion of her prayers. Four days later, Andery is called to an improvised wedding ceremony between Nicholas and Jennifer during the night.

On 29 December 2807 Andery is tasked with bringing Sandra Tseng and Hans Jorgensson back from the polar region, after they refused to be separated and turned their backs on Nicholas Kerensky instead, a mission he succeeds in on 5 January 2808.

Dana Kufahl has meanwhile been elevated to the rank of Khan of Clan Coyote. Her decision to follow a vision and lead her Clan away into de facto exile in the dangerous Broken Sea desert causes a rift between her and Andery. Sarah McEvedy is becoming a friend to Andery in Dana's stead.

As Nicholas' appointed envoy to the nonmilitary castes, Andery is confronted with serious discord in late 2814 because the foster family program has been massively extended and has now been made mandatory. Senior Laborer Justin makes it clear that the civilians will not tolerate this perceived attack on family bonds. Andery realizes he is being set up as a catalyst for a possible uprising again, just like for the Prinz Eugen Mutiny, and tries to talk the civilians out of their evident plans for rebellion. Still, an attempt on Nicholas' life is made during a parade on 27 December of that year that wounds several warriors and kills Andery's friend James Carson, among others. Laborer Justin is found dead shortly afterwards, obviously in an attempt to appease Nicholas who is now ruthlessly exploiting the attack for his agenda—he had actually expected the attack (wearing a bullet-proof vest). Recovering from his wounds, Andery finds himself a helpless bystander again while Nicholas builds a new, rigidly organized meritocratic society centered around the Warrior caste and subdues the other castes into submission.

On 9 June 2815 Nicholas finally declares himself ilKhan and announces their return to the Pentagon. Andery has a very bad feeling about Nicholas' manipulations and personality cult, which have established him as something of a prophet or sect leader in his new order. In a private meeting on that evening, Jennifer Winson admits to Andery that she underwent plastic surgery, and was previously Jess Cole. She is both a glowing follower of Nicholas' ideas and a driving force for him, sharing his ideas and claiming to have served him as a loyal soldier since the occupation back on Terra, wearing so many masks over time that one more ("Jennifer Winson") does not matter anymore. 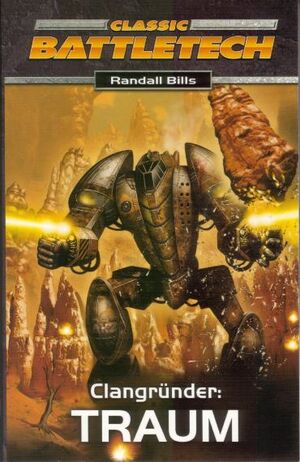 Published by FanPro as the fifth entry in their German-only line of Classic BattleTech novels in January 2006, Clangründer: Traum ("Clan Founders: Dream") was a translation of an earlier manuscript of this novel. It was notably the only published version of the story until 2021, when it was superseded in canon by the revised and expanded 2021 electronic edition.