This article is about the universe booklet that came with the boxed set. For the BattleTech universe as such, see BattleTech Universe. 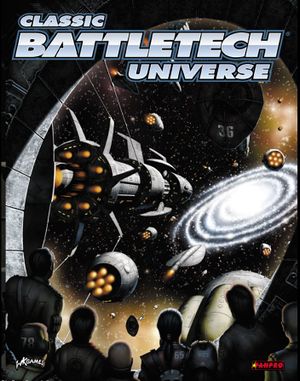 The booklet was retitled to Inner Sphere at a Glance and slightly expanded for the 2007 Classic BattleTech Introductory Box Set, and would go on to see several editions under that name.

The Classic BattleTech Universe booklet was included with the 2003 Classic BattleTech Boxed Set by FanPro, and was also offered for free PDF download as a promotional product first by FanPro and later by Catalyst Game Labs from their respective BattleTech website, the now defunct classicbattletech.com site.[2]

There was a brief Introduction followed by an in-universe document titled A Time of War that introduced the BattleTech universe from an in-universe point of view; however, the order was switched around in the table of contents.

The history section is based (verbatim) on the text from Introduction to BattleTech (which was attributed to Michael Stackpole), but was expanded by adding several paragraphs. Where the earlier version ended in 3049, just short of the Clan Invasion era, this booklet's history section continues through the Civil War era and up to the year 3067, on the brink of the Jihad era.

The writeups on BattleMech technology and the Technical Readout section were similarly taken from the previous booklet, while the descriptions of the Great Houses and other powers were rewritten and greatly expanded. The section about MechWarriors and all artwork in the book is completely new.