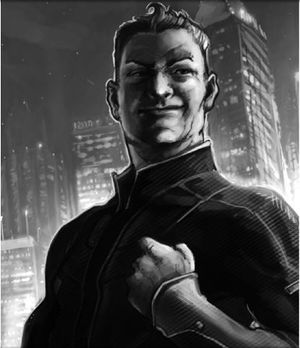 During Operation Revival and shortly after, he was described as a tall, thin man, with piercing eyes and black hair. He was a politically savvy Clansman, as well as a capable warrior and leader. He was devoted to the Crusader political cause.[3][4]

Conal rose through the ranks of Clan Wolf to become the commander of Delta Galaxy, also known as the "Red Wolves". In 3038, he was the subject of a competency trial where he developed a personal grudge against fellow officer, Ulric Kerensky.[5]

When Conal became Galaxy Commander of Delta Galaxy, he was known to enforce the unit's tradition of the ritual known as "Bloodstart" for new warriors. Each warrior was made to bury the corpse of their first kill after its blood is ceremonially painted across the brow of the warrior. They then formally visit and make restitution to the victim's family as a way of pressing home the grim reality of their career.[6]

During the Clan Invasion, he was at the helm of his Red Wolves Galaxy. He was also a powerful political nemesis to Khan Ulric Kerensky. He allied himself with like-minded Warriors, who shared his Crusader beliefs, such as Vladimir Wolf.

By February 3051, Conal had arranged himself to be a candidate to replace Khan Ulric in anticipation of Ulric's upcoming elevation to ilKhan. This would have allowed Conal's Crusader views to change the political alignment of the Wolves. In the Wolf Clan Council, he engineered for a series of other bloodnamed Wolves to nominate him as Wolf Khan, only to surprise his opponents and allies alike by making a great show of declining the office. The resulting opinion of the Council was to offer him a "consolation prize" in the form of elevation to Clan Wolf's Loremaster. The Crusader-Warden battle would then be carried to the Clans Grand Council, where the Crusaders plotted to elevate Ulric to IlKhan and replace him by tradition with the Clan Loremaster. In this way, Conal and the Crusaders planned to gain greater support in the Grand Council and thereby force Kerensky to go along with Crusader priorities. However, Kerensky cleverly out-maneuvered Conal, citing Ward's own speech in the Wolf Clan Council declining the office of Khan, and appointed Natasha Kerensky to Khan instead.[7]

In the aftermath of the Battle of Tukayyid in May 3052, Loremaster Conal illegally influenced a Bloodname contest and was caught, eventually being forced by Khan Natasha Kerensky resign his position as Loremaster and his command of the Delta Galaxy. As a final humiliation, he was then forced to announce his intention to go hunting bandits.[8][9]

After his resignation, he became the Star Colonel of a solahma warrior unit, the 31st Wolf Solahma Cluster. He used his remaining political connections to staff the unit with troops loyal to him. He was also able to retain his OmniMech, which he would have been normally forced to give up.

In 3055, Conal became involved with elements of Clan Jade Falcon to carry out a clandestine plot to destroy the Truce of Tukayyid and thereby re-ignite the Clan Invasion. The Falcons secretly sponsored a force masquerading as a pirate band known as the Corsairs, led by the enigmatic Red Corsair. IlKhan Kerensky ordered Conal's unit to intercept and destroy the Corsairs to prevent Treaty of Tukayyid from being compromised. With permission, Conal and his Cluster pursued the Corsairs into Federated Commonwealth space.

In Pursuit of the Corsairs[edit]

Conal's force first arrived in the Zhongshan system, where they caught the Corsairs departing. Conal formally challenged the Corsairs in Clan fashion, but the pirates fled. In June, Conal's force caught up to the Corsairs on Deia, where the local militia was involved in a pitched battle with the Corsairs. Allowing the militia and its mercenary support, Zimmer's Zouaves, to think of Conal's force as allies, Conal dropped his force directly onto the Deia defenders' position claiming they were occupying his rightful landing zone in a combat situation, destroying them in the confusion. Seemingly unwittingly, during the ensuing battle between the militia and Conal's solahma, the Corsairs were able to escape.

Ward's actions on Deia caused a political uproar with the Federated Commonwealth's ruling Archon-Prince Victor Steiner-Davion, which prompted him to dispatch the Kell Hounds to the area with orders to destroy Conal's unit should they attack more "allied" units. After a running series of "cat and mouse" skirmishes and ambushes, the Wolf solahma and their apparent mercenary allies (now joined by a force led by Khan Phelan Ward) finally seem to corner the Corsairs on the Wolf Clan Occupation world of Elissa. Here Ward and his true ally, the Red Corsair, sprang their trap: to delay the Kell Hounds and Khan Phelan's forces long enough to detonate a nuclear weapon.

In the aftermath of the battle, Conal was captured and shot by Khan Ward, who passed the killing off as a Circle of Equals, while the Red Corsair was killed before she could trigger the device.[10]

Conal Ward was noted as a Man O' War OmniMech pilot, which he continued to use through most of his career until his death. He was known to have his own custom configuration for his machine at times, but often used the standard loadout as well.[11][12] However, he did not use this configuration in his final duel with Khan Phelan Ward.