Connor Gilderoy was a twenty-fifth century Lyran nobleman and the Duke of Skye. 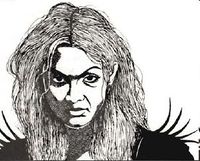 Little is known of Gilderoy's early life, or indeed how his family came to hold the Dukedom of Skye, one of the critical worlds of the Lyran Commonwealth and the seat of power to the Federation of Skye, one of the three founding states of the Commonwealth. As such, it may be assumed that Gilderoy commanded the support of most of the Federation's worlds. During the reign of Archon Steven Steiner, Gilderoy and his ally, Duke Samuel Natesh of Tamar and leader of the Tamar Pact, gained great influence over Margaret Olsen-Steiner, the Archon's wife, who was effectively ruling the Commonwealth at that time, as her husband had grown increasingly indecisive and withdrawn during his reign. Between Olsen's insanity and the interference of the two powerful Dukes, the Lyran government became less efficient. [1] [2]

When Archon Steven died in 2501, no one was able to prevent Olsen from formally taking the throne as Archon, although the Estates General did not confirm her ascension. Many within the government favored Robert Steiner, Archon Steven's illegitimate nephew and the son of Duchess Tatyana Steiner. In late 2503, Robert, formerly a minor officer in the LCAF serving on the Free Worlds League border, travelled to Tharkad to stake his claim. Realizing the usurper had too much support in the government to oppose on the capital, Gilderoy and Natesh spirited Archon Margaret to Skye, forcing a military confrontation with Archon Robert and setting the stage for the first Lyran Civil War. With much of the government and military behind him, Robert fought a bloody campaign across many worlds, ultimately conquering Skye within two months. However, the sudden arrival of Duke Natesh's Tamar forces helped Olsen, Gilderoy and much of Gilderoy's forces escape. [3]

Four months later, the war would be decided as Robert and his troops attacked Tamar. The loyalist forces were exhausted by this time, and in no condition to face the entrenched defenders. Olsen and her supporters were on the verge of victory when a mediator from the Terran Hegemony arrived in an apparent attempt to resolve the dispute, declaring a temporary cease-fire. Gilderoy accompanied Olsen and Natesh, who were compelled to meet with Robert on the mediator's DropShip. Hostile negotiations lasted through the night and ultimately failed, but this delayed the final assault by a full day. Once the mediator had left, the Dukes and Olsen prepared for a final assault on Archon Robert, only to discover that Duke Nels Reynolds of Fatima, a distant relative of the Steiner family, had arrived with reinforcements. The bolstered loyalists soon defeated the rebels, capturing Olsen and both Dukes. [4] [5]

Robert led the 1st Royal Guards as the loyalist forces forced Gilderoy and Olsen to ground along with their remaining forces; in the final stages leading up to the capture of Olsen and her allies, the 1st Tamar Fusiliers were the last unit to remain loyal as the 1st Royal Guards pushed through Tamar City and the Fusiliers' defenses within the city, aiming directly for the Parliamentary bunker where the rebels were hiding. Olsen and the rebel Dukes were captured after an eighteen-hour firefight that leveled much of the downtown area of the city.[6]

In the aftermath of the war, Gilderoy was stripped of his titles, tried for treason and executed. Gilderoy's family was exiled to the remote corners of the Commonwealth. House Lestrade, which had supported Archon Robert in the war, was awarded the Duchy of Skye. [7] [5]