The Draconis Elite Strike Teams (DEST) are the Draconis Combine's chief special forces units, although not the only ones. An elite corps of commandos trained in every branch of the military (from piloting a BattleMech to operating a JumpShip), they follow the tenets of the ancient ninja.[2] DEST commandos typically consist of Draconis Combine Mustered Soldiery MechWarriors seconded to serve as the direct action component of the Internal Security Force.[3]

Like any individual wishing to join the Draconis Combine's Special Forces, DEST soldiers must have attended three academies and graduate in the top 5 percent of each one.[4]

Although all DEST personnel are trained MechWarriors, they do not necessarily pilot 'Mechs. DEST commandos frequently operate as infantry units or infiltrators.

DEST teams are formed for individual missions and are apparently numbered sequentially. Known numbers include DEST One and DEST Two in 2461, and DEST 6654 in 3056. 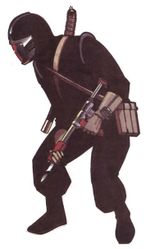 The DEST organization existed as early as 2457,[5] but DEST One was only deployed in 2461 against the BattleMech factories on Hesperus II in an attempt to steal the construction plans. This attempt failed and the entire team was killed, but shortly afterwards DEST Two succeeded in stealing BattleMech plans from the Lyran Commonwealth's 'Mech factory at Coventry.[5]

DEST members are trained among other abilities as Mechwarriors, and can be considered an Elite force. One DEST company called "Sword of the Void" was combat-dropped on Crossing during the Fourth Succession War to decapitate Wolf's Dragoons. They landed in the middle of the Dragoons' position where they helped Kurita units to regain their composure and keep pressuring the Wolf's Dragoons. The Sword of the Void was destroyed, but not before destroying fourteen 'Mechs, killing Jaime Wolf's executive officer; one notably skilled female DEST Archer pilot (whose identity remains mysterious) even outfought Natasha Kerensky, nearly defeating her and Jaime Wolf himself.[6]

A DEST team, during the War of 3039, almost succeed in decapitating the Lyran Commonwealth forces when they attacked the Lyran headquarters on the Draconis occupied world of Vega. They gunned down Lyran General Nondi Steiner, grievously wounding and almost killing her. By the time she recovered and retook command of her forces, the Lyran forces had lost much of their initial momentum.[7]

Following the Clan Invasion the ISF was tipped off to ComStar's Operation SCORPION by Sharilar Mori. With enough advanced warning, the ISF deployed the DEST teams to take control of the HPG stations throughout the Draconis Combine before ROM was able to solidify their hold on them. Following the success of this mission, Coordinator Theodore Kurita ordered the ISF to locate the Clan Homeworlds, necessitating the deployment of agents throughout the Clan Occupation Zones. A majority of the agents deployed belonged to DEST.[8]

In 3056, the Draconis Combine Admiralty commandeered the civilian JumpShip Telendine to carry DEST 6654 from Salford. The JumpShip, its attached DropShip and the DEST team vanished in a jump accident. DEST 6654 was composed of at least twelve operatives, but their 'Mech contingent was an attached mercenary lance and not organic.[9]

In 3058 the head of the DEST, General Hohira Kiguri, disappeared soon after an attempt was made on Coordinator Theodore Kurita's life. It is believed that General Kiguri was a member of the Kokuryu-kai as he was a long-time opponent of the Coordinator's policies.[10] A DEST team six, led by Sho-sa Michael Ryan, launched a very successful raid on the Clan Smoke Jaguar occupied planet of Bangor in 3058, stealing them several OmniMechs before to escort Coordinator Theodore Kurita to Tharkad, to the First Whitting conference. The same team and another, both led again by Ryan, joined Task Force Serpent, training together with all other force groups before traveling to the Smoke Jaguar home planet of Huntress.[11]. On the way, in the Battle of Trafalgar, they succeeded in capturing a Clan Ghost Bear JumpShip. On Huntress, they were the first troops to land on planet, in a covert operation during which they crippled the Jaguar command center, shutting down a SDS defense system, fighting during all the campaign. They achieved this at a very high price: both teams were annihilated: only Ryan and another commando survived the campaign.[12]

DEST commandos use a wide array of equipment for their missions, including KA-23 Subguns, Vibrokatanas, and Circle-Vision Visors. They are perhaps most famous for the DEST Infiltration Suit, though once it became available Kage Battle Armor largely replaced these suits for field work. Besides 'Mechs, DEST teams make use of other vehicles such as Koryu submersibles and Peacekeeper VTOLs.

The DEST color scheme is black and silver[1]