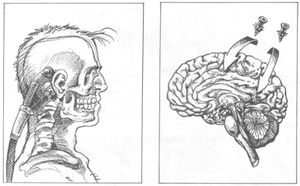 Proposed by Professor Burke Kale in 3043, the Direct Neural Interface (or DNI) was designed to replace the combination Neurohelmet and manual control systems used since the invention of the BattleMech with a direct connection between the MechWarrior and the machine. This connection would provide much more accurate feedback directly into the MechWarrior's brain.[1]

The Direct Neural Interface is effective at coordinating the data transfer between the 'Mech systems and pilot.[1]

With these restrictions in mind, the Federated Commonwealth decided not to pursue the project. Instead they devoted funding to the Small Cockpit and Torso Cockpit systems.

The only known user of the DNI system was Burke Kale.[1] After having the DNI input jack inserted in his brain in 3053, he stole most of the technology from the NAIS Dark Mirage facility on Hyde and went to Solaris. He used the DNI-retrofitted Prometheus to tear through opponents in the arenas and fund the completion of the Epimetheus, the only 'Mech specifically designed for the DNI interface. Unfortunately, the pure link with the Epimetheus drove Kale to launch a mindless rampage through Solaris. Kale was eventually defeated and arrested, with the remains of both the Prometheus and Epimetheus shipped back to the NAIS for review. At the same time, a ComStar ROM operative copied all the plans and schematics for the DNI system.[citation needed]