Dana Kufahl was the first Khan of Clan Coyote. As the great love interest of Andery Kerensky, his death during Operation KLONDIKE would terribly distress the Coyote Khan, and would lead to the passing of the Coyote Khanship. She would later continue to help guide her Clan in the role of adviser and ambassador to the other Clans, after a period of wandering through the deserts of Strana Mechty on a quest of personal healing.

The child of two members of the destroyed Terran Security Force who became freedom fighters, Kufahl was orphaned by the age of one. Adopted by a tribe of Native Americans who called themselves "the Spirit of the Coyote", the deserts and mountains of southwestern North America were their home and refuge. Growing up on Terra during the brutal years of the Amaris Crisis, Kufahl learned many of the tribe's mystic rituals from their Spirit Walkers, just as she had also learned to use their weapons to fight the cruel Amaris troops.[1][3]

When General Aleksandr Kerensky issued his call for the Exodus, Dana Kufahl gladly joined, along with several other members of her tribal band. The tribe would bring with them their sacred texts. They also brought with them a pack of Terran coyotes, having no intention of leaving their patron spirit and namesake behind during the long journey into the Deep Periphery.[3]

During the Exodus, Dana Kufahl began her formal education and training. Later, on Dagda, she enrolled in one of the first military academies to be established. While she was far behind in what most would regard as traditional studies, her martial prowess was unmatched. Her calm demeanor and quick intelligence made her a natural MechWarrior and leader. She would meet Andery Kerensky during this time as well, having been assigned to the academy as an instructor. The two would become close friends. Eventually, the two would become lovers.[1][3]

Kufahl would be away from the Pentagon Worlds when rebellion broke out and the Great Father died. Assigned to an exploration team on the world of Foster in the Kerensky Cluster, she experienced a vision of a knight in armor being swallowed by darkness that then swallowed everything else it touched. Contacting her ship, she learned of the developments on Eden. But when she arrived back at the Pentagon Worlds, it was too late for her or anyone to help.[3] 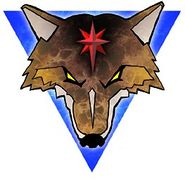 Kufahl was one of Nicholas Kerensky's most devoted followers. She is counted among the 800 who went with him into exile on Strana Mechty during his Second Exodus. In the years that followed, she became a part of the "cult of personality" surrounding Nicholas, something that would become a sore point between her and Andery. When Kerensky established the Clans, Dana Kufahl was the obvious choice for Khan of Clan Coyote.[1]

Kufahl would take the ilKhan's ideas very seriously. Ideas about honorable combat would come together in her mind as the rules of zellbrigen. She would sometimes make her own traditions from his random thoughts or ideas, and enforce them on her Clan. But she also paid attention to her own tribal rituals, maintaining several of her tribe's customs, sharing the experiences with her warriors to cleanse them and bind them together as a fighting force. She put special emphasis on the Vision Quest, teaching her troops to look for signs and portends in the occurrences of the world around them.[4]

During one incident in particular, she and her warriors were in a vast desert called the Broken Sea at Strana Mechty's equator, on a three-month vision quest and training sabbatical. While observing a small herd of tallasi, a bovine-type creature native to Babylon, what seemed to be two packs of wolves closed in on the herd. After a chase through the rocks and sand, the two packs worked together to take the creatures down. When it was over, the warriors noticed that among the pack of now-feasting animals were wolves and coyotes. The two had worked together to take down much larger prey, and were sharing the reward of the kill. Taking this as a great omen, Khan Kufahl would later relate the experience to Andery and Nicholas Kerensky, who then told the Khans of Clan Wolf of the incident. Soon the Khans of both Clans would draw up plans to extensively train together, forging a bond that would last for centuries to come.[4]

In 2821, the ilKhan finally gave the order for the Clans to retake the Pentagon Worlds. Selected to drop onto Babylon, the Coyotes would land along with the other three Clans in the hills and valleys surrounding the city of Camlaan, initially with the vague plan of knocking out the strongest power on the world first, in hopes of cowing the others into submitting to the will of the Clans. Once contact with the enemy was achieved by the Clans, this plan would fly out the window.[5]

The Battle of Camlaan was a brutal affair that the Coyotes began in earnest, but later saw them withdraw when Clan Sea Fox Star Colonel Karen Nagasawa overstepped her bounds by issuing orders to Khans. Khan Kufahl likewise saw her and her Clan's tactics as dishonorable. She would order her Coyotes to stand back and let the Sea Foxes face the Camlaans alone - Clan Cloud Cobra and Clan Ice Hellion had their hands full as well, and were not available to assist in the attack. Though the Sea Foxes would be victorious, it would come at great cost in warriors; among them their first Khan, David Kalasa.[6]

After the battle, they would find that the other Clans no longer wanted to campaign with the Coyotes. Convinced of how right their position was, the Coyotes would turn away and head north, deeper into the Snaefell Mountains, subjugating the vast but relatively empty northern areas of Solath.[7]

The continent of Abyssinia did not appear to offer much glory. Since the Coyotes were the last Clan to finish fighting on Solath, there was no other choice. But there were a few enclaves that would have to be dealt with. Kahn Kufahl ordered her forces split into three groups, one under her command, one under command of saKhan Kesar Jerricho, and another under the command of Star Captain Gerek Tchernovkov. They led their forces separate ways, taking the small settlements that dotted the land, coming together to take the larger ones. At the city of Luyden, saKhan Jerricho would attack with 23 'Mechs, and destroy twice that number of opponents. At Ponomia, Khan Kufahl bid 18 'Mechs to take the city, winning her bid, but taking significant losses while fighting a protracted battle.[8][9]

Star Captain Tchernovkov would outdo them all. He received a message from the leader of the city of Versailles, asking for negotiations with him specifically. To the surprise of all, especially Tchernovkov, the leader of the city was Richard Tchernovkov, his twin brother who also happened to be a brilliant scientist. The brothers talked for two days, then on the third day Gerek sent Khan Kufahl a message stating that he bid only one warrior to take Versailles, accompanied by an invitation to tour the city.[10]

Khan Kufahl was hit particularly hard by the news of Andery Kerensky's death. Slipping in and out of alternating fits of depression and mania, she was becoming unhinged to the point that it was obvious to her warriors. SaKhan Kesar Jerricho would find the solution: he challenged her to a Trial of Possession for the Khanship, and won. With no loss of honor, Dana Kufahl retreated to the Broken Sea, seeking to find healing in her old tribal rituals. She would continue to serve her Clan upon her return from this sabbatical, both as an adviser and as an inter-Clan ambassador until her death in 2855.[1][4]

Founder of the Kufahl Bloodname House, Dana Kufahl's line would also carry the Kerensky genes, as her Clan held special rights to annually produce sibkos of her and Andery's children, in honor of their love. Likewise, Clan Wolf produces sibkos the same way and for the same honor, though with the Wolves, these sibkos are only eligible for a Kerensky Bloodname.[11]

Her insistence on honorable warfare became the basis of zellbrigen, a legacy she helped to impart to all of the Clans. Her rituals are followed by her warriors to this day. Even if many do not believe in the rituals' supernatural elements, the close bonds created while experiencing the rituals have convinced most that their ways and traditions are the best in the Clans.[1][12]

Dana Kufahl was known to pilot a Black Knight throughout Operation KLONDIKE.[13]