David Kalasa was the first Khan of Clan Sea Fox (later known as Clan Diamond Shark). A skilled tactician,[3] he was killed in the battle of Camlaan on Babylon during the opening phase of Operation KLONDIKE.

David Kalasa shares two important things in common with many Clan warriors of his era. One was his strong devotion to the ideas of Nicholas Kerensky's new society,[1] and the other being the scarcity of information regarding his pre-Clan life.[4]

David Kalasa was born on the Capellan world of St. Ives. His childhood dream of becoming a MechWarrior fighting alongside the famed General Aleksandr Kerensky against the Usurper Stefan Amaris would not come to be, finishing his training just as the campaign to liberate Terra came to an end. He would accompany the SLDF during the Exodus from the Inner Sphere into exile in the Deep Periphery, leaving the corrupt Successor Lords to their own schemes and devices.[1] 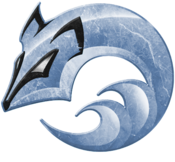 Second Exodus and the Clans[edit]

A devoted follower of Nicholas Kerensky, David Kalasa followed him to Strana Mechty on the Second Exodus after serving the SLDF in exile even after the drawdown of forces.[1] His skill as a warrior and his belief in Kerensky's vision were strong enough that the ilKhan would appoint Kalasa as the first Khan of Clan Sea Fox in 2807. Reportedly, Kalasa accepted the position on one condition: that the ilKhan also assign aerospace fighter pilot and Star Colonel Karen Nagasawa to his new Clan, drawing parallels between her and the nobility of the Sea Fox totem.[5]

Operation KLONDIKE and Death on Babylon[edit]

Dropping onto Babylon in early July of 2821 as part of the campaign to reclaim the Pentagon Worlds, the city-state of Camlaan was chosen as the first target, after an initial desire by the four Clans to hit the strongest power on the world, an attempt aimed at quickly cowing the other minor powers on the planet. This plan would never really leave the table.[6]

Once she understood the situation that the Clans faced, Star Colonel Karen Nagasawa hastily issued commands for the four Clans to coordinate a strike against the well-organized defenders, after she led a bombing run over their main positions. Khan Kalasa led the bulk of his force into position and began the attack in earnest. Two of the Clans had other things occupying them at the moment as the Ice Hellions and Cloud Cobras did. They could do little but help themselves out of problem after problem in the chaos of their initial landings. But the other one – Clan Coyote – did not respond for different reasons. Coyote Khan Dana Kufahl took grave exception to Nagasawa's presumption of command in the operation. The Sea Fox Star Colonel's use of what she considered to be dishonorable tactics also made Khan Kufuhl angry, angry enough to feel that she should teach the upstart Nagasawa a hard lesson in her vision of Clan honor. Khan Kufahl ordered her Coyotes to stand back and not interfere unless attacked, watching from nearby as Khan Kalasa and the Sea Foxes faced their first major challenge alone.[5][6]

Khan David Kalasa would lead many charges against the defenders, fighting into the night and until dawn. But at some point his skill could carry his 'Mech no further and his luck would run out, and his Flashman was completely obliterated by concentrated heavy weapons fire after having downed eleven enemy 'Mechs while leading two other remaining MechWarriors from his Command Star. Khan David Kalasa was dead, and the losses sustained in the battle were heavy throughout the Clan. His warriors would take the city before long, moving on to other continents, away from the other Clans assigned to take the rebellious desert world.[6]

The Sea Foxes took the loss of their first Khan very poorly, blaming the other Clans' for his death, especially the Coyotes and their Khan Dana Kufahl. His protégée Karen Nagasawa would be elected Khan at the urging of Clan Sea Fox saKhan Dianne Sennet, remaining loyal to what she felt her deceased Khan would have wanted.[5]

Later generations in his Clan would regard him as an "inspired placeholder", a great warrior and leader who prepared the way for their most influential Khan.[1] Founder of the Kalasa Bloodname House, his genetic heritage is prominent in all branches of his Clan's Touman,[7] regardless of what the Clan might call itself at the time.