The DeChavilier Massacre was a response to a rebellion that took place on the Pentagon Worlds, and was a major event leading up to Nicholas Kerensky's Second Exodus and the forging of the Clans.

After the death of Katyusha Kerensky in 2796, General Aleksandr Kerensky was distraught and somewhat listless for quite some time. During this period, tensions sharply increased on all five of the Pentagon Worlds. A multitude of colonial pressures combined with the reemergence of old loyalties to the Successor States caused widening cracks to form in the Star League-in-Exile. The situation deteriorated rapidly, threatening to undo everything that the exiles had so far built since departing the Inner Sphere.[5][4]

In November of 2800, full scale rioting broke out on Eden. Events would continue to escalate until rebel forces culturally loyal to the Capellan Confederation declared their independence from the Star League-in-Exile in May of 2801. They seized a Brian Cache in order to - unsurprisingly - gain the upper hand in their fight against a rival group of rebels loyal to the old Federated Suns. The stage was now set for yet greater violence to play out.[5][4]

General Kerensky awoke from his malaise at this event, dispatching a force of loyal SLDF troops led by General Aaron DeChavilier and Major Elizabeth Hazen to restore order on Eden. Arriving in the Pokill Jungle, they quickly found that the situation had already spiraled out of control. The Liaoist rebels had prepared for all of their enemies, regardless of who they were. Approaching the rebel encampments, Major Hazen's Black Knight stumbled and fell into a pit of oil that burst into flames almost immediately. She ejected from her doomed machine before she too was consumed in the inferno, but was struck by a bullet to her helmet before she could touch back down to the ground, falling unconscious from the force.[1]

When she awoke, she saw that General DeChavilier was engaged by a surrounding force of rebels using handheld missile launchers and other weapons to attack the beleaguered loyalist forces. His Atlas had fallen down with only one leg functional, landing in another of the rebel's pit-traps. Instead of ejecting, he stayed at the controls of his BattleMech, returning fire as best he could while his troops had surrounded him, intent on defending the life of their commanding officer against the rebel ambush. As inferno missiles impacted his 'Mech repeatedly, the pit of oil finally caught fire, engulfing his prone machine. Finally, at what must have been the last possible moment, DeChavilier did eject. But as he did, heavy weapons fire from hidden rebel positions tore him apart. Aaron DeChavilier, Star League General and best friend of General Kerensky, was dead.[1][6]

Upon seeing her commanding officer and rumored lover die in such a terrible manner,[7] something snapped inside of Major Elizabeth Hazen. Her side of the events that followed are the subject of Clan Jade Falcon's Legend of Turkina, told in her Clan to every sibko up to present day. Witnesses to the events of the day would tell of a grief and fury stricken Elizabeth Hazen, armed with only a sword stripped from the hands of a dead rebel, striking down foe after foe in her quest to avenge the noble life of one who she dearly loved. She was not alone in this; all of the troops in the small task force had risen in rage, slaying every rebel in sight, with no regard and no limiting factors. Major Hazen would go on to lead the remnants of the force in a successful assault on the rebel stronghold, taking the fight all the way to its bitter and bloody conclusion.[1][6]

This blood stained incident did not end here. General Kerensky, in his tremendous grief, ordered the execution of all rebels. Settlement after rebel settlement on all of the Pentagon Worlds was burned to the ground. But this would simply have the opposite of the desired effect on the increasingly rebellious populace.[8] 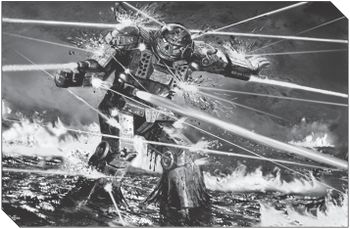 General Aleksandr Kerensky was well over 100 years old by this point, stretching the limits of Star League medical advances. Stricken by grief at the death of his friend whom he had ordered into the battle, he began to put together a plan to retake Eden. But this was not to be. On 8 June, 2801, General Kerensky would die of a massive heart attack. Major General Nicholas Kerensky claimed leadership of the SLDF only to be rebuffed by most of the other division commanders. With a choice between fighting it out with the various commanders who claimed leadership, or exile, he chose the latter. Kerensky left the Pentagon Worlds for Strana Mechty a few months later, with only a relative handful of loyal followers in tow. An era had ended, but a new one had only just begun.[2][9]

Certain sources published in Germany have Aaron DeChavilier piloting a Warhammer BattleMech at the time of his death.